More Guru Tweets were published today, answering Sims fans questions about the abomination that is Sims 4

Here's a summary of the answers from today: 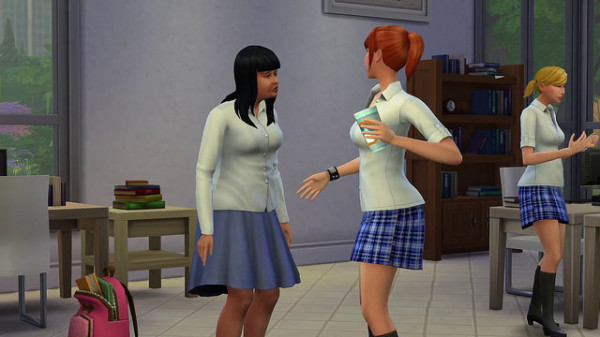 -With the auto-aging feature (that players can turn off and on as pleased), NPC Sims can age and die on their own. When the family dies, newly generated Sims will move in and take over there household.

-You can jump to separate households and manage the Sims there.

-The story progression will not be similar to that in the Sims 3. NPC will not continue on generations by themselves. If you want a family that isn't your own to have multiple generations, you must switch to that family and try for a baby or play as them. (Meaning, new Sims will only "move in and die" when they come into town)

-There is a chance NPC Sims families will not have children or babies.

-There are NO work, school, or grocery store lots. Adults and children leaving for these lots will do the same thing as they did in Sims 2, which is leave the current lot and return when they're done.


Also, there is a new post explaining and clarifying the world/lots/loading screens of the new game.

Worlds in the Sims 4

Willow Creek, the first confirmed world for The Sims 4, is a New Orleans inspired world divided into six individual neighborhoods. Only one neighborhood and lot in the world can be active at one time.


• World – The world is split into 6 playable neighborhoods, but is not an “open world” like The Sims 3. Only one individual neighborhood can be active and played at one time.

• Neighborhoods – There are 6 confirmed neighborhoods in Willow Creek. Five neighborhoods have up to five lots within them (both residential and community), and the sixth neighborhood is a large park called Magnolia Blossom.

• Lots – There can only be up to 5 lots in each neighborhood, and only one active lot loaded at a time.

• Public Spaces – Public spaces are the open areas of a neighborhood that are not part of a lot. In The Sims 4, public spaces in each active neighborhood will be fully loaded at all times, and Sims will be able to roam these areas of the world freely. 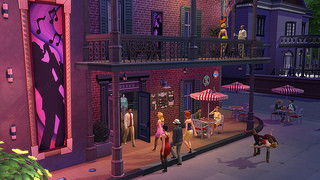 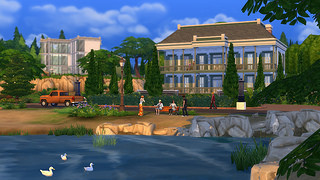 Loading screens in The Sims 4 have a stylized Plumbob in the center, with text strings passing through at the bottom. According to the gurus, loading screens will take less than 30 seconds of your time, and only appear when traveling between worlds, neighborhoods, and lots. (surejan.gif)

Here are the answers to where the loading screens will appear:

• Public Space to active lot (and vice versa): No 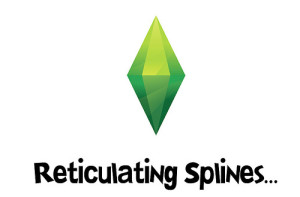 Active Sims can travel to any neighborhood/lot in the world, and you as the player can follow right along with them. If you have more than one Sim in your household, you can send them all to other parts of the world without you. When switching between two Sims on different lots, you will incur a loading screen.

Sims outside the active neighborhood can still be controlled to a minimum using a new system called “away actions”. To quote SimGuruGraham, you can “choose other specific Sims for them to socialize with, you can build specific skills, can sleep, can have them maintain their needs…things like careers have their own set of away actions that are more relevant to their work.”

From Sims Guru Graham: You can send Sims off to different neighborhoods, different lots, they’ll continue simulating in the background, so wherever they are, if they’re not active on your lot at that time, time is still passing. If you go somewhere and then come back after a few hours, that time will have passed, so they’re still thinking, they’re doing their life simulation and actually, there’s some small little ‘away actions’ is what we’re calling them, that you can start to have actions for your Sim while they’re away, so you can give them little tasks to do while they’re gone doing their own thing.

The entire world can age, that’s an option and that’ll all happen no matter if you’re loaded there or not, they’re going to continue to age. The difference there between played households and NPC households? Played households are families that you have played so I can jump between my household and another household and they can both be aging if I want them to, or I can turn that back off, that’s kind of where the distinction is.

It just sounds like their putting an alpha Sims 2 in a new candy wrapper and calling it Sims 4. I'll probably just torrent it to play with CAS (which is the only thing I've liked that they've shown us so far). What say you ONTD? Will any of this info deter you from purchasing??? (Or, heaven forbid, encourage you to buy?!)