Mark Ruffalo Reveals the AVENGERS: AGE OF ULTRON Cast Is Coming to Comic Con and MORE

Find out how you can join me on the @Avengers set by making a donation to @WaterDefense. http://t.co/e5Z1lmtEo9 pic.twitter.com/GNEKfouUAl

San Diego Comic Con is less than a month away and Avengers: Age of Ultron is now less than a year away, so that means SDCC 2014 is Age of Ultron’s only chance to hit Hall H prior to its release.  It’s always made sense that The Avengers would have some sort of presence at the event, but now Mark Ruffalo has confirmed it.  While talking to Ruffalo about his upcoming release, Begin Again, he revealed that The Avengers are flying from set in London to San Diego for Comic Con, and also discussed the possibility of a standalone Hulk movie, the elements of the character he’d like that movie to explore and much more.  Catch it all after the jump.

When asked how he’s feeling about stepping out in front of the crowd at Comic Con, Ruffalo revealed:

“Yeah, we’re gonna go out there.  We’re all flying, we’re flying from London.  We’re working.  We’re shooting.  We’re gonna stop and get on a plane and go to Comic Con together.  It’s gonna be amazing.” 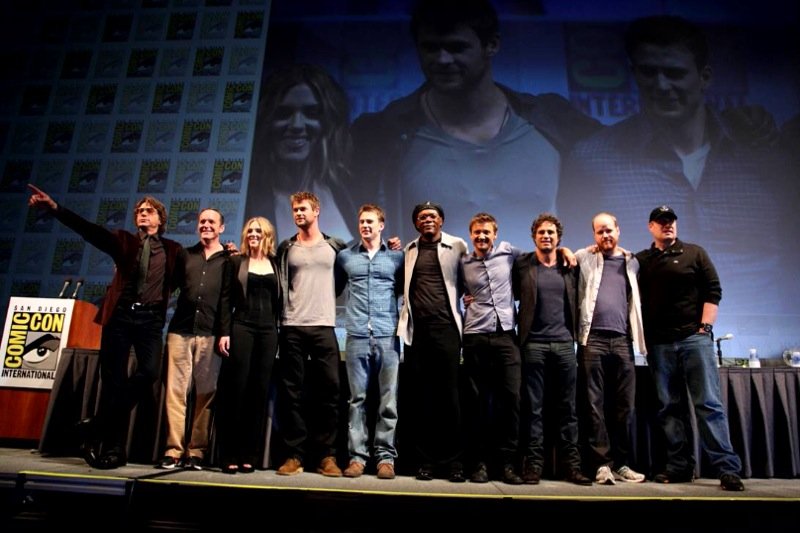 Even though Age of Ultron is still in production, it’s hard to imagine the whole team flying out and not bringing some footage along with them.  When asked what we can expect to see, Ruffalo teased:

Having spoken about his project picking process during our discussion about Begin Again and the importance of having a solid script right at the start, Ruffalo noted that that was a potential problem for him on Avengers because having access to the script almost wasn’t possible.

“See, the problem with those movies is they don’t have a script when they’re casting you and that was really problematic for me.  I made a promise to myself that I would never sign on to anything before there was a script, and I’ve been able to stay pretty true to that, but that was a particularly, you know, rare occasion.

First Joss [Whedon] reached out to me and I was thinking, ‘Me?’  You know, ‘Why me?’  And then Robert [Downey Jr.] reached out and they’re like, ‘You know, let’s do this,’ and I [asked], ‘Well, is there a script?’  ‘No, we don’t have a script.  We’re not gonna give you anything.  You have to just sign on.’  I’m like, ‘Sign on to nine movies without knowing what the heck I’m gonna do?’  And so I said, ‘Joss, you have to understand, I got into trouble once doing this.  I made a promise to myself I would never sign on to something without having a script again.  You understand where I’m coming [from?]’  He’s like, ‘I totally get it, man.  What if I float you maybe 20 pages of what Banner’s gonna be doing so you just get a sense of what it’s gonna be?’  And I said, ‘Would you please do that?  I’d be so grateful to you and it would make this process a lot easier for everybody.’  And so he did and I loved it.  And, you know, it was basically Banner’s introduction with Black Widow.”

Thanks to that nine-picture deal, Ruffalo now doesn’t have the option to assess a script before committing to The Hulk’s next film.  He admits he is nervous to have someone write for the character other than Joss Whedon, but he’s also confident that the foundation they’ve built thus far will put him in good shape for Age of Ultron and future films.

“Well, now I’m signed on, but, you know, I know Joss, we’ve been talking about it already for a year.  I know where he’s going, I know who Banner is, so there’s a nice continuity there.  I’m a little nervous when someone else comes on and Joss isn’t doing the writing and so I’ve made it to two movies now with him and so I have four more to go.  I feel like who Banner is is established enough now that it’s gonna be okay.”

Ruffalo’s The Hulk was a highlight in The Avengers, so it’s no surprise that there’s been talk of a possible standalone film for his version of the character.  But of course, we’ve already had two solo Hulk movies and neither can match Marvel’s current standards.  Considering Bruce Banner’s popularity and the immense success of just about every movie that takes place within the Marvel Universe, odds are, if we do get a new Hulk movie, it’ll be a hit, but what about from a character perspective?  Does The Hulk need his own movie? Ruffalo admitted, “He might not,” and further explained:

But I do feel like we’ve gained some ground on this new version of him, which has – he’s sort of turning to face himself, and I think the relationship between Banner and The Hulk as a conscious conflict, it could be really interesting.  The one thing that I think The Hulk is terrified of is Banner, and that’s never really been mined.  And now with this new motion capture technology, we can do something really exciting with Hulk that we’ve never been able to do performance-wise that I am hoping when we’re talking about doing a new version of this, that we’re really talking about having a relationship between these two entities that is conscious of each other and in conflict with each other in a really cool, interesting way.”

Even though motion capture technology has come a very long way and is currently delivering remarkable results, there are some advancements Ruffalo would like to see prior to moving from Avengers: Age of Ultron to a Hulk standalone film:

“We’re a little bit behind on the motion capture technology as far as facial recognition in real time.  Now we have, when I put on my motion capture suit, I look in front of me and there’s me as The Hulk.  There’s The Hulk.  Every move I make, The Hulk’s making it and so you have this immediate feedback like almost looking in a mirror, but instead of seeing myself, I see The Hulk …  But they haven’t come up to speed on the facial recognition that way.  They can capture the facial – the new technology is we can shoot the body recognition and the facial recognition at the same time, so now you can integrate performance, physical performance with the actual face and voice, but by the time we’re ready to probably – if we do another Hulk – that technology will be in real time and once that happens, there’d be no limit to what you can do creatively as far as your physical being is concerned.  I can play a freakin’ parasite in the ass of a worm [laughs].

It’s so exciting.  There’s no limit to where we can go.  I hope to be a pioneer in this space with Andy Serkis.  I worked a lot with him on this.  I’m very excited by what he’s doing.  We are retraining the studio to see this as integral a part as the first unit.  This is not second or third unit or motion capture unit.  This is first unit.  This is performance.  It’s completely driven by the actor and it has to be honored as much as anything else, so that’s kind of where we’re heading with this technology and it’s very exciting.”

You can catch Ruffalo talking Comic Con, The Avengers and The Hulk for yourself in the video clip below, and be sure to keep an eye out for a full chat with the Begin Again star coming to Collider tomorrow.

someone from ONTD better be on that avengers set.