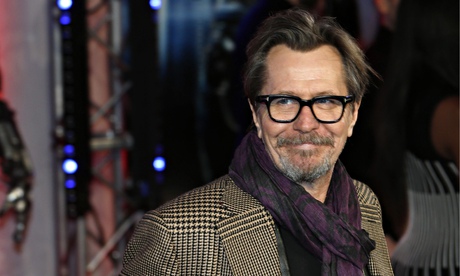 Fuming Gary Oldman has urged people to 'get over' the Hollywood 'outcast' Mel Gibson's notorious racist rants - insisting: "I think political correctness is crap." The Dawn Of The Planet Of The Apes star says Mel is 'all right,' despite the actor's previous use of anti-Semitic and racist epithets - claiming: "We all hide and try to be so politically correct. That's what gets me."

Speaking in an explosive new interview with Playboy, the 56-year-old comes to the defence of both Mel and Alec Baldwin as he said people are 'hypocrites' for not forgiving the pair's transgressions. When asked about the Braveheart star's treatment, he said: "I just think political correctness is crap. That's what I think about it. I think it's like, take a fuckinging joke. Get over it."

Gibson, 58, made anti-Jewish slurs when he was arrested for suspected drink-driving in Malibu in 2006, two years after his film The Passion Of The Christ was criticised for depicting Jews negatively. According to the police report, Gibson made anti-Semitic remarks to the arresting officer, saying: 'Fucking Jews... the Jews are responsible for all the wars in the world."

And in the wide-ranging interview in Playboy's July/August double issue out on Friday that covers Gary's 'wild nights' with groupies and his four marriages, the actor - whose new movie Dawn Of The Planet Of The Apes is out next month - says: "I don't know about Mel. He got drunk and said a few things, but we've all said those things. We're all fucking hypocrites. That's what I think about it. The policeman who arrested him has never used the word nigger or that fucking Jew? I'm being brutally honest here. It's the hypocrisy of it that drives me crazy. Or maybe I should just strike that and say "the N word" and "the F word," although there are two F words now."

Mel returned to the headlines in 2010 accused of battery of his then-partner Oksana Grigorieva, following the release of an audio recording where the actor apparently threatened to wrap a bat around his ex-girlfriend's head, used racist slurs and appeared to admit to having punched her twice.

His friend Gary, who has also starred in Dracula, also backed 'good guy' Alec Baldwin, despite his past homophobic remarks. He said: "Alec calling someone an F-A-G in the street while he's pissed off coming out of his building because they won't leave him alone. I don't blame him. So they persecute. Mel Gibson is in a town that’s run by Jews and he said the wrong thing because he’s actually bitten the hand that I guess has fed him - and doesn’t need to feed him anymore because he’s got enough dough. He’s like an outcast, a leper, you know? But some Jewish guy in his office somewhere hasn’t turned and said, “That fucking kraut” or “Fuck those Germans,” whatever it is? We all hide and try to be so politically correct. That's what gets me. It’s just the sheer hypocrisy of everyone, that we all stand on this thing going, “Isn’t that shocking?”'

After then jokingly saying, 'fuck the Pope,' the True Romance actor admitted the interview had taken a fateful turn, and insisted he was not 'a bigot.' Working class Londoner Gary, who is the son of a welder, said: "'No, but I’m defending all the wrong people. I’m saying Mel’s all right, Alec’s a good guy. So how do I come across? Angry? It’s dishonesty that frustrates me most. I can’t bear double standards. It gets under my skin more than anything."

He then claimed certain comedians are allowed to say racist and homophobic things under the guise of satire, while he would get slammed. The father-of-three claimed: "Well, if I called ( Minority Leader of the United States House of Representatives) Nancy Pelosi a cunt — and I’ll go one better, a fucking useless cunt I can’t really say that. But Bill Maher and Jon Stewart can, and nobody’s going to stop them from working because of it. Bill Maher could call someone a fag and get away with it. He said to Seth MacFarlane this year, “I thought you were going to do the Oscars again. Instead they got a lesbian. He can say something like that. Is that more or less offensive than Alec Baldwin saying to someone in the street, “You fag”? I don’t get it."

The actor, who only ever received one Oscar nomination despite a career of acclaimed turns, took a bitter swipe at the way members of the Academy of Motion Picture Arts and Sciences vote - as he also called the Golden Globes a 'meaningless event'. Gary was finally nominated for a best actor in 2011 for Tinker Tailor Soldier Spy, but lost out to The Artist's Jean Dujardin . He said: "At the Oscars, if you didn’t vote for 12 Years a Slave you were a racist. You have to be very careful about what you say. I do have particular views and opinions that most of this town doesn’t share, but it’s not like I’m a fascist or a racist. There’s nothing like that in my history."

The London born star, who now lives in Los Angeles with fourth wife Alexandra Edenborough, insisted he was a libertarian in his political views, and added, "you don’t come out and talk about these things, for obvious reasons." And he claimed his independent nature and his refusal to work on the political side of fame had cost him the movie world's most prestigious prize.

He said: "What people don’t realize is that you need to work at being a celebrity. I’m not talking about movies. I mean the other side of it. You have to campaign. It’s a whole other part of your career, and I wish I could have navigated it a bit better. I may have an Oscar now, had I."