Adam Richman from Man vs. Food "called me 'a c*nt'" and "told my friend to 'kill herself'" 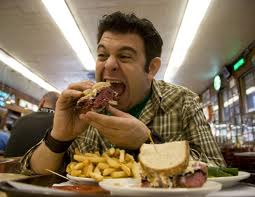 So, most of you are probably familiar with Adam Richman, the dude from Man Vs. Food, a show on the Travel Channel. (the general gist is he goes on ~eating challenges~ across the country and eats vomit-inducing portions at local restaurants. That’s it. There’s no real redeeming factor here.) I’ve never liked Adam, he’s always given off a super entitled vibe and I’ve heard many stories about people going to meet him and him locking himself in his production van or ignoring fans.

He was a chubby dude the whole time the show was going on, but recently he’s lost a bunch of weight. D-list celebrities losing a lot of weight isn’t really a big story–being famous means there’s a lot of pressure to look a certain way. If that’s what he wanted, if it makes him feel better, good for him. I’m all for body autonomy and what another person chooses to do with their body isn’t any of my business. However, it was brought to my attention that he posted this photo:

Just seems like another boring self-congratulatory weight loss photo. . .until we get to the last tag. Thinspiration? Oh really? Now for those of you not hip to the lingo, thinspiration is very popular in pro-anorexia and pro-bulimia circles, generally consisting of pictures of emaciated bodies, mantras like ‘what’s more important, that slice of pizza or a thigh gap?’ and suggestions, tips, and motivation to either starve or purge. (Regardless of whether or not you agree with dieting, starving or purging are things that should never be encouraged.) Without context, thinspiration may not seem like a bad word, but a simple google search proves that it was created by a community of people with eating disorders to inspire each other to continue and celebrate their illnesses.

A friend of mine who followed Adam saw his post, and figured that maybe he was not aware of the negative connotations of the word ‘thinspiration.’ So she decided to explain it to him politely (which sadly I don’t have a screenshot of.) This was his response: 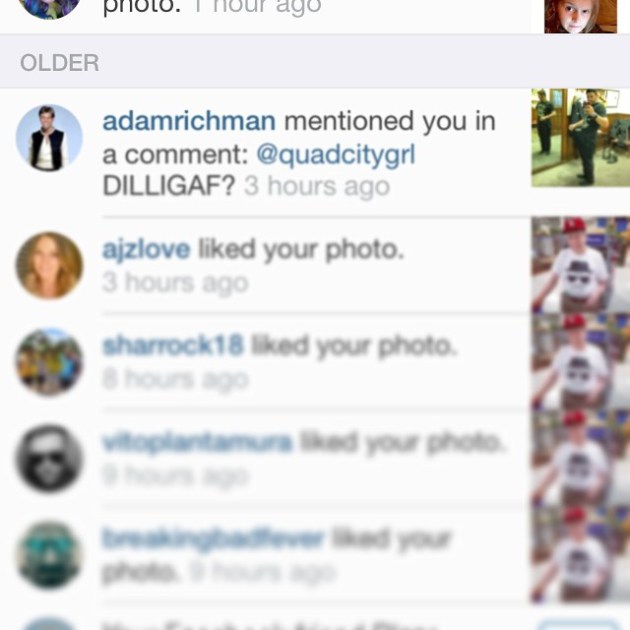 Now look, we’ve all used words by mistake, we’ve all stumbled and said something offensive and didn’t realize it. It happens to the best of us, and it’s totally understandable. But when you’re called out for saying something that does active harm, especially if you’re somewhat of a public figure, you listen, you apologize, and you don’t do it again. A perfect example would be when Jonah Hill was recently demonized for throwing a homophobic slur at a paparazzo. His apology was perfect. As a public figure, even if you have a personal instagram (Adam has 92k followers) you need to understand that the things you say will be scrutinized, and the words you use have meaning. (here’s a great blog post about intent vs. impact.) You need to be extra careful to think about not how what you mean when you say things, but how other people will interpret them. And in a society where eating disorders are at an all time high, thinspiration is a loaded word.

I also posted a comment on Adam’s instagram about how the term was problematic, but it was ignored, so I made a post about Adam’s ‘DILLIGAF’ comment on my personal instagram, and asked my followers to ‘tell him that eating disorders are not a joke and nothing to take lightly.‘ My followers did just that, but I didn’t for one second predict the vitriol that followed. 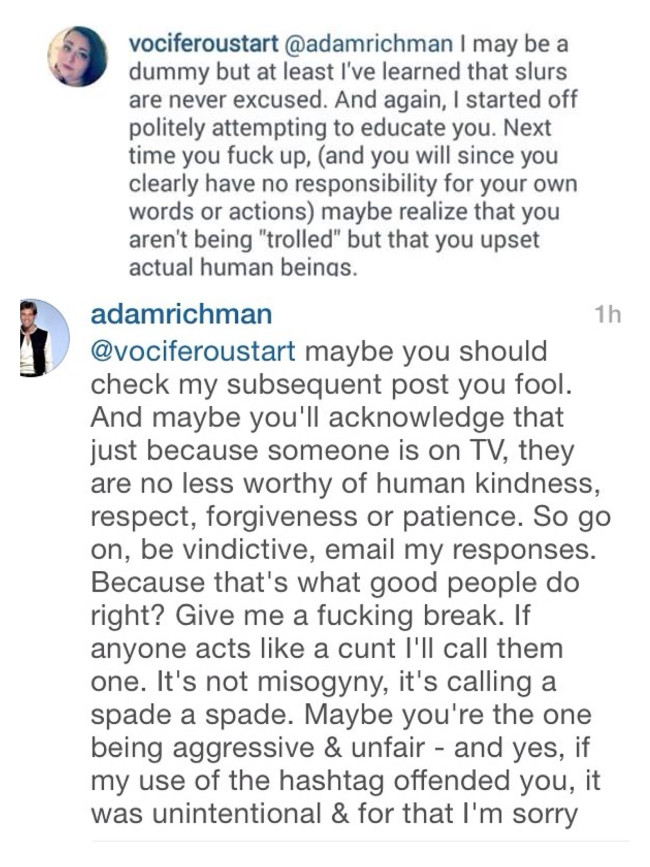 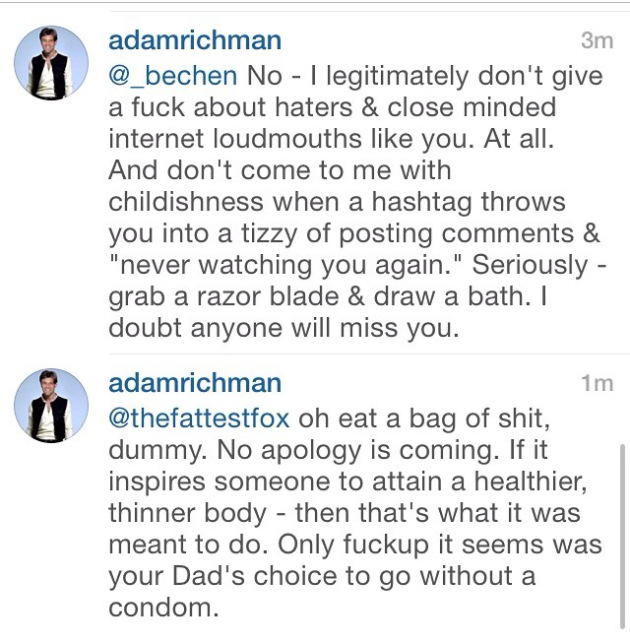 There was apparently a point where he referred to me specifically as a ‘cunt’, but he ended up deleting it before anyone got a screenshot. But yes. He told a friend of mine to kill herself, told another to eat a bag of shit, and completely went on the attack, lacking any modicum of class or decorum. He then blocked anyone who called him out (myself included) regardless of whether their comment was rude or polite.

You know what? It doesn’t feel good to be called out publicly when you do something wrong, especially by multiple people. It’s uncomfortable. But these responses are completely unacceptable.

He then went on to ‘apologize.’ But this apology was completely invalidated in the comment section, where he waxed poetic about people being oversensitive and pandered to his fans instead. I for one am extremely disappointed by the fact that he’s obviously not learned anything from this incident.

I wonder how the Travel Channel, who employs Richman, feels about him going around calling girls cunts and telling them to kill themselves?