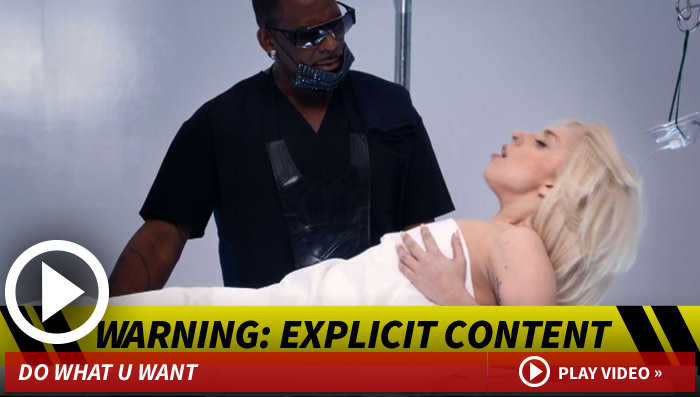 Gaga's music video for the song, "Do What U Want",  was officially put on ice because of vague problems including time constraints and betrayal. The NY Post now reports ... sources claim Gaga was in the dark over claims that famed director Terry Richardson sexually assaulted or harassed models -- claims that have now surfaced because the models have spoken out.  The Post says the models' allegations have shaken Gaga's people and triggered her change of heart over releasing the video.

As for Gaga's co-star -- she had to know R. Kelly was once tried for alleged child pornography. Kelly was acquitted on all charges.

The video is graphic -- you see Gaga laying in a hospital bed and R. Kelly plays the doctor. He reaches under her sheet, she moans, and he responds, "Sounds like that medicine's starting to kick in." Then Gaga passes out and a party starts on top of her body.

Richardson put himself in the video too -- he's seen snapping pics of naked Gaga while she's writhing in newspapers and touching herself.

Terry Richardson has vehemently denied doing anything inappropriate with his models.

Check out the video.

Many interviewers quelped today about my 'SHOCKING' performance w/ R Kelly on SNL I'm beginning to think y'all aren't ready for the video .