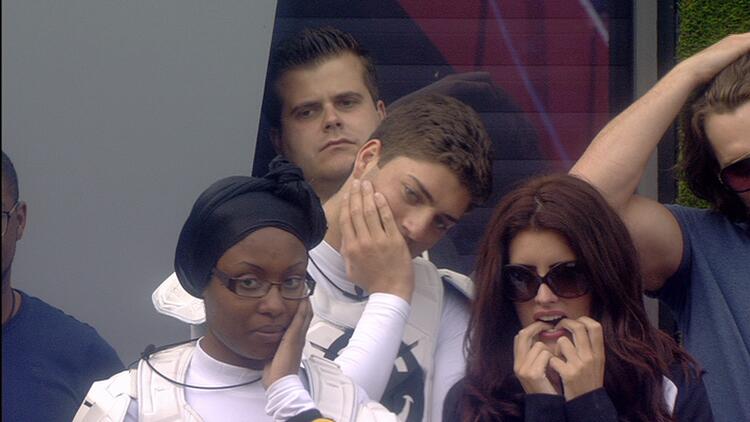 Bosses from Big Brother are facing criticism during the first week of the show, amid allegations of blasphemy, bullying, racism and swearing.

Broadcasting watchdog Ofcom said it had already received 209 complaints about the series in its first seven days.

The nature of the argument, which was watched by 1.3million viewers, already forced Channel 5 to pull the daytime repeat from the schedules - for the first time in the show's history.

The furious argument, which was aired on Tuesday, involved Helen telling Danielle - who says she lives by strong Catholic principles - to ‘stop shaggingg Jesus’.

Now Ofcom is assessing the complaints and deciding whether or not to open a formal investigation into the comments made.

After the row was shown, viewers accused Helen, 27, of blasphemy, with several Twitter users calling for her to receive an official warning from the show over her comments.

After the argument was aired, @laurxx123 tweeted: 'Oh my god if Helen Wood gets left on the big brother house after calling Danielle a fat bitch and bullying Chris I give up'.

Another user, ‏@JimmyPara1 said: 'If #bigbrother don't take action against what Helen said about Jesus, that would be a major error on their part'.

And @julianhilaire tweeted: 'What Helen,said about Jesus was quite offensive she should apologise to Danielle and Catholics in general #BBBits'.

There has also been concern raised about Danielle making allegedly homophobic comments.

When talking about same-sex marriage, she told fellow housemates: 'The Catholic church don't believe in it and I go by what the Pope says.'


If Helen had made a remark about Allah she would've been kicked out of big brother due to 'racism'. When it's about Jesus, nothing. #bbuk

How can Helen comment on Danielle's religion & get away with it?If she said stop shagging Allah it would be a different story. Bitch #bbuk