Exclusive Interview: Eiza Gonzalez on ‘From Dusk Till Dawn: The Series’ 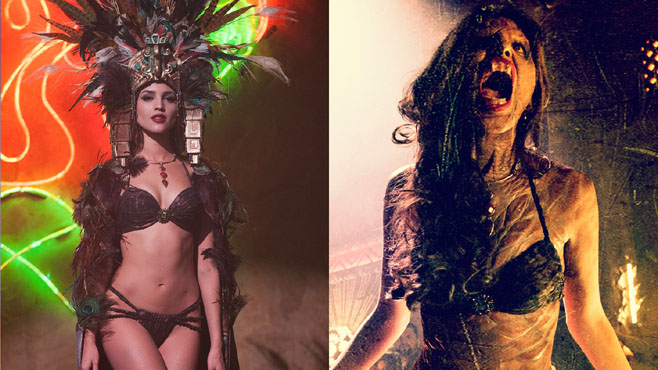 We interview the vampire queen of “From Dusk Till Dawn: The Series” about dancing and pouring blood down her leg.

Eiza Gonzalez may have had the toughest role in “From Dusk Till Dawn: The Series.” As Santanico Pandemonium, she had to recreate the snake dance made famous by Salma Hayek in the movie. Since the series is doing things a little differently from the movie, Pandemonium has a lot more to do than she did in the movie. We got to speak with Gonzalez by phone to talk about her work on “From Dusk TIll Dawn: The Series.” And the season finale airs tonight on the El Rey Network.

CraveOnline: In the movie From Dusk Till Dawn, we know Quentin Tarantino had a foot fetish so he wrote that he was drinking off of Salma Hayek’s feet. How did Zane Holtz feel when you recreated that scene in “From Dusk Till Dawn: The Series?”
Eiza Gonzalez: [Laughs] You should ask him. Yeah, Zane wasn’t that into it. I don’t think that Zane has a foot fetish at all, so it wasn’t that pleasant for him for sure, but it worked out great. He did a great job pretending he loved it. It was very, very uncomfortable, but at the end of the day, on camera it looked great.
I was really nervous. It’s just crazy. It’s such an iconic scene. All that involved that scene, I was worried about falling while I was trying to lift my leg, trying to look cool while I was doing it, walking towards Zane. I had really little clothes on so being on top of that table and dancing, I have to bend down and probably everyone behind me had a great view, but everything behind the camera just looked insane.

I feel that the result is really cool. I loved it. You see that it’s connected to that scene but they’re completely different. There’s two different versions of it and from the lighting to the camera to the shots to the dance to everything, I have a two headed snake, and there are different things going on so I loved it. I’m very excited.
Practically, is it difficult to pour tequila down your leg and have it land in the right place?
Yes, it is. It is very complicated and the cool thing of this one is it’s not tequila, as you saw. So it’s really, really cool. Yes, it is very hard because A, I was slipping on the table trying to balance on one foot. I was getting all the actors underneath me wet. I was dropping the tequila on top of everyone so I’m trying to craft it as it goes down my leg towards Zane and looks cool at the same time. Trying to lift my leg, I’m not that flexible. It was such a fun moment, it was very awkward while we were shooting it. It looks amazing on camera and it is very uncomfortable and it’s very complicated.

When you are getting your makeup done, do you get to gradually see yourself become a vampire?
Yeah, it’s crazy. I actually took pictures of myself in every stage because I was so impressed. I’ve never gone through such a huge transformation in my life. I’ve done prosthetics here and there, small things, but I was going through 10 full prosthetic makeup and those guys are amazing. They were hand painting me every single time with no reference whatsoever. They just flew around my body just amazingly and it would always look identical.

They’re just artists, so Greg Nicotero and all the team on it, just amazing. I loved working with them. It’s creepy. It’s definitely creepy to watch yourself being full of scales and getting all these grotesque colors on you. When I get my contacts in and my fangs and my fingers are so gross, I looked crazy and very scary. I really got freaked out. I really looked very gross. I’m so happy that I look like that. The possibility of being able in the same episode to go so drastically from one look to another, I really wanted physically and corporally people would be able to see the difference.

So you can see all my movements when I’m Santanico are very delicate, very subtle, very slow and when I turn into the vampire, I’m very snaky. All my movements are very aggressive, very rough. My arms, my legs, the way I stand, everything is completely different so I am very excited about seeing that transition, going from a very sensual side to a very dark side.

Is Santanico Carlos’s boss or are they partners?
I mean, Carlos would never admit it, but I’m their boss. I run this place. I’m the queen of the macabre. It’s a very weird relationship he has with this character. You’ll get to see why it is like that. Yeah, I’m his boss, but he’s such a badass too. It’s really cool that you have two characters to support with. I feel that in the original, it was a little bit more you couldn’t tell who was really until you got to the Titty Twister and there was all this darkness.

The Carlos character just builds up the anticipation of the Titty Twister and when you get there it’s hell. So I love it. I love it and we are definitely partners in crime but it’s cool to see the relationship they both have. It’s very dark and gnarly and creepy, but it works so well for the character.

What’s your background, because you’re relatively new to us?
I’m new in the States but I’ve been working probably eight years now. I started working when I was 15 and I started in soap operas in Mexico and then worked for Nickelodeon Latin America for three years. I toured and sang and acted, all of the above. Now it’s really cool because I always played the good girl and the cute, innocent, rebellious teenager and now I get to be much more of a woman.
I’m excited because I got to feel very comfortable in my own skin and very sexy and powerful. I would never go into that side of me because I feel we are all scared a little bit of it, but when I got to do it, I really enjoyed it and it’s not often that you get to go and be such a badass on set. It’s not just a cute character walking around being cute. It’s just this badass vampire queen, she’s so powerful. I just loved it. It was amazing.

Were you always bilingual?
I studied in American school so yes, I grew up speaking English and Spanish. Obviously Spanish is my first language. I’m born and raised in Mexico. I only spent eight months in the States but definitely English is a really big part of my life and I love it. Thank God my mom put me in American school because I’m able to be working in the States and it opens a lot more doors being half and not being only one. It’s cool because I get to turn it on and off. I can have an accent and not have an accent, so it’s really cool. I can play with it. I can be very Sofia Vergara too, so it’s really cool.

Has “From Dusk Till Dawn: The Series” opened more doors for you?
Oh, definitely. I mean, when you work with someone so respected and so admired, Robert is very well loved in this industry and respected. Quentin Tarantino is one of his best friends, you know, this huge director that really respects him. It’s like when you go to lunch, you’re always checking everyone else’s lunch of your friends. It’s the same thing. I feel like everyone else is checking out what’s going on with Robert and Robert checks out what’s going with Jon Favreau and they all check about their work.
Obviously when you get to work with someone who is loved and respected, people will turn their heads and wonder why you’re there, right? Like ooh, who’s this girl? Why is she working with Robert? What factor made him choose her and give her such an iconic role? Yes, definitely and thank God, more than anything, the most important door for me was working with him. It’s a dream come true when you come from Mexico City with a dream.

Everyone dreams of being in Hollywood so I was prepared mentally to take long to get work, and when I got it with Robert it was just mind blowing, so I’m very thankful. Hopefully this will not be the last time that I work with him and hope  this is just the beginning for a lot of positive things in my life, and I really want to grow as an actor.

Were you about five or six when the movie From Dusk Till Dawn came out?
Six. I was a baby.

When did you become aware of the movie?
When I was 11. I have a brother, he’s 12 years older than me and was obsessed with Salma and with Robert, so we would watch it without our parents’ permission. We would hide in his room and we would watch all these horror movies. He would force me because I was so young and I was scared, he would force me to watch it. He was evil. He was a little bit evil, so obviously when you watch a movie like this when you’re so young, you get marked for life.

I will never forget the day that I watched it. Yes, when I found out that I was going to play that role, I couldn’t believe it. 20 years later I’m here standing being already a grown woman and trying to do a little bit of what she did at that point and trying to be a little bit as good as she was, so it’s just crazy. I can’t believe this is happening. I seriously thank God, and I’m very blessed for everything.
Queen Santanico beckons you in