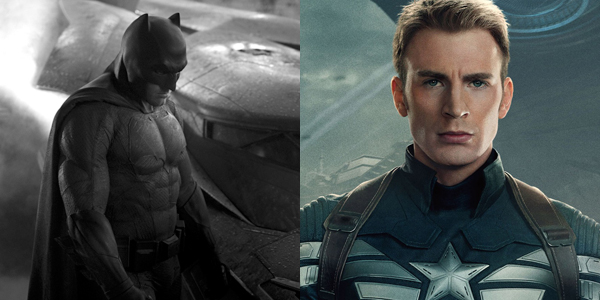 Back in 1984, when a hit film played for six months, the world didn’t live or die by opening weekend. Today such a head-to-head match-up would be suicidal. Yet we see on the horizon, in 2016 especially, a handful of seemingly insane demographic box office duels, where films either targeting identical demographics or big enough that they need to suck up most of the oxygen in the room are opening against each other.

As someone that didn’t follow the release date until the early 1990′s, I will admit that it came as a shock when I discovered through happenstance that Columbia’s Ghostbusters and Warner Bros.‘ Gremlins both opened on the same exact day. 30 years ago yesterday, June 8th, 2014 saw the wide release debuts of both iconic horror-tinged comedies. They both opened with over/under $13 million ($13.5m on 1,300 screens for Ghostbusters, $12.5m on 1,500 screens for Gremlins) and both rose 11% in their second weekend. What’s most interesting about their respective box office stories is how little effect going head-to-head had for either picture.

I talk a lot about weekend box office not necessarily being a competition between debuting movies, but sometimes the demographics are such that the opposite is true. Here are three explicit examples, all in the summer of 2016 no-less, of seemingly insane box office match-ups. Obviously it’s June 2014, so all three of these may end up getting called off as studios come to their senses. But for the moment, let us highlight what amounts to “very big apple” versus “very big apple” showdowns that are currently scheduled for summer 2016.

The obvious one. I think we all know the story by now. slated an untitled Marvel Studios comic book film for May 6, 2016 because Marvel really likes that valuable summer kick-off slot. Warner Bros. originally had Batman v Superman: Dawn of Justice (back when it was hypothetically called Man of Steel 2: Challenge of the Superfriends) for their golden mid-July slot, July 17, 2015 only to delay the film for ten months and schedule it right on the May 6th date. Marvel didn’t budge, instead scheduling an wherefore unannounced Captain America 3 during the run-up to Captain America: The Winter Soldier‘s blockbuster debut. They also scheduled Edgar Wright’s, Adam McKay’s, Rawson Marshall Thurber’s, Peyton Reed’s Ant Man for July 17, 2015. Warner Bros. didn’t blink either, scheduling Guy Ritchie’s King Arthur reboot for July 22, 2016.

Two years out, we have one of the greatest games of box office chicken ever (intentionally?) scheduled, with Steve Rogers, coming off an uber-popular sequel, going up against the first live-action team-up of Clark Kent and Bruce Wayne. It is all-but impossible not to presume that someone is going to budget eventually. Warner Bros. has slotted Batman v Su… okay, I’m not typing that whole title out again, for a UK debut on April 30th, which technically would allow them to move the film’s domestic debut a week early as well if they so choose, which would allow them to still claim a theoretical summer kick-off launch along the lines of Fast Five. It is also a possibility that Warner Bros. slotted King Arthur (a film that we’ve heard little about before or since the release date announcement) as a kind of placeholder should the Dream Factory decide to reclaim their preferred mid-July launching pad.

Back in March, I stated that Disney’s slotting of Captain America 3 meant that Marvel was willing to sacrifice Steve Rogers to hurt Bruce Wayne and that Warner Bros. had to get the hell out of that date. I still feel that way, but frankly Captain America: The Winter Soldier is now Marvel’s most valuable stand-alone franchise and if (and this is a big if) Guardians of the Galaxy underwhelms and if Ant Man conjures more online bickering than mainstream interest, then the Captain America 3 vs. Batman v. Superman showdown will be on somewhat equal footing. I still think the logical play is for Warner Bros. to swallow their pride and drop their film on July 22, 2016. Of course, as someone who writes about this stuff and enjoys the release date musical chairs aspect, I honestly hope that Lionsgate decides to move Hunger Games: Mockingjay part II into the May 6, 2016 slot just to screw with everyone. Sadly Lionsgate has denied the rumor, started by me, that they plan to do such a wonderful thing.

Someone needs to remind Hollywood that the month of May, 2016 contains four whole weekends in which to release major summer movies. Because three weekends after the Superman vs. Captain America smack down, 20th Century Fox's X-Men: Age of Apocalypse will go up against Disney’s Alice In Wonderland 2 (now titled Through the Looking Glass). You could make the somewhat stereotypical argument that the films are targeting different demographics. But A) both films will arguably play to a variety of demo groups and B) both films will be expensive enough that they have to play to most demographics in order to succeed.

Alice in Wonderland cost $200 million back in 2010, while X-Men: Days of Future Past cost $225m. Unless Disney and/or Fox plan to severely cut costs the second time around, both films are going to need all the available oxygen in the room that weekend. Obviously no one wants to drop anything big on May 13th just in case the Captain and the Capes end up going head to head the week prior, but May 20th, the weekend before Memorial Day weekend, is absolutely clear. It would be the perfect weekend to, say, launch a sequel to a popular family film that would then parlay a decent opening into a strong holiday weekend hold.

I don’t know how much interest there will be in an Alice in Wonderland 2: Into the Looking Glass, especially with audiences somewhat tiring of Johnny Depp’s antics (even if there is real acting underneath the makeup) and without Tim Burton at the helm. I loved the last two Muppet movies, but James Bobin doesn’t exactly have the marketing cache of Tim Burton. Yes the first film opened with $116 million, earned $332m in America and snagged $1 billion worldwide, it wasn’t exactly beloved (cough-Tomb Raider Trap-cough) and you could argue some of its box office might was due to it being a Tim Burton film as well as the first major 3D blockbuster after Avatar, dropping in early March no less. Fox is in a better position with X-Men: Age of Apocalypse.

I seem to be the only one who wasn’t crazy about X-Men: Days of Future Past, but a $611 million+ worldwide and counting total means that the X-Men franchise is somewhat back in ship-shape, and the promise of a comic book adventure that plays like a disaster film will certainly hook the casually curious as well as the hardcore fans (my disaster porn-loving wife will be psyched beyond words for it). One of these films needs to move. This isn’t a case where a $30m opening for Mama Mia! against The Dark Knight‘s $158m debut is going to be a win-win for both parties. And whatever legs there might be post-holiday are going to get severely kneecapped by Sony’s The Amazing Spider-Man 3 on June 10th and the world’s dumbest showdown on June 17th. The obvious answer is simple. Disney should move Through the Looking Glass to May 20th. Speaking of the world’s dumbest showdown on June 17th…

While it’s clear that the Batman/Superman showdown came about as an intentional king-of-the-mountain competition, this inexplicable animated face-off seems to have occurred because neither Walt Disney nor DreamWorks Animation/20th Century Fox was paying attention to the other’s scheduling choices. To wit, DreamWorks scheduled How to Train Your Dragon 3 on June 17th, 2016, the equivalent of the same weekend where How to Train Your Dragon 2 opens this Friday. While the second film came four years after the initial installment, this one comes just two years after, which presumably means that DreamWorks has been working on it for awhile (animated films don’t happen overnight). Anyway, way back in September of last year, Pixar’s delay of The Good Dinosaur sent the whole Disney schedule into a tailspin.

Maleficent moved from July 2nd to May 30th in place of the Pixar toon (that went well for them, natch), The Good Dinosaur ended up at November 25th, 2015, and Finding Dory got bumped to June 17th, 2016, right up against How to Train Your Dragon 3. I didn’t even realize the conflict until I was researching another issue and stumbled on the release date. I thought for sure it was a mistake, but nope, How to Train Your Dragon 3 and Finding Dory will be opening on the same day two years from now. Said release date is two years away, and logically speaking this is one face-off that surely won’t happen, right? Surely both studios, run by thoughtful and responsible adults, would see the insanity of putting the two biggest animated franchises they currently have in a head-to-head match-up for really no good reason.

Look, both films will presumably have decent legs, being that they are animated pictures in the middle of the summer. But nonetheless, there is no good reason to open the films on the same date. So the question is which one moves. After this weekend, I’d argue DreamWorks will find itself in the position that Disney found itself after Captain America 2, with a beloved blockbuster sequel setting the stage for massive anticipation for the third installment. Pixar is weirdly the underdog in this situation, as the whole Good Dinosaur situation and the (relative) deluge of sequels have led many pundits to call “time of death” on Pixar’s artistic glory. Hogwash I say, but that’s the narrative no matter how well the Pixar films continue to do at the box office. So point being, under the current narrative, will Disney/Pixar want to look like the weaker animation giant by moving the sequel to their biggest original picture to get out of the way of DreamWorks’ most prestigious ongoing franchise?

Obviously if How to Train Your Dragon 2 opens to $175 million this weekend (slight exaggeration), then I would somewhat expect Disney to bolt by Tuesday. Conversely, if How to Train Your Dragon 2 underwhelms this weekend (say, under $45m?), then DreamWorks may be the release date deserter. I don’t believe for a moment that this head-to-head match up will actually occur. But I’m genuinely curious as to how it plays out, especially as there isn’t much summer real estate left for 2016, especially if Fox’s hypothetical Independence Day 2 actually makes its theoretical July 1st release date (I’m skeptical). Of course, if ID4 2 doesn’t happen or gets delayed, then a solution will present itself (How to Train Your Dragon 3 slips into the July 4th weekend and sends Sony’s Angry Birds scurrying in horror). Otherwise, one of the two properties will either have to move outside of summer or take their chances with an early August release.

We’ll see if any of the above showdowns actually come to pass. There are arguable solutions for each of them, and you can discuss scheduling musical chairs options below. Moreover, that we have three inexplicable showdowns just in the first seven weekends of summer 2016 shows how insanely crowded summer 2016 is going to be. It also shows what a different box office environment we live in compared to the one where two large-scale pictures like Gremlins and Ghostbusters, arguably targeted similar demographics, could open head-to-head without really harming the box office of either picture as both slowly earned their massive grosses over the course of lengthy theatrical releases. It was a less front-loaded time, ladies and gents.

beoweasel
June 10th, 2014, 11:15 pm
I'm not sure how my local comic-book shop is going to handle Batman vs. Superman and Captain America 3 being released at the same time.

Normally, they rent one of the theaters from the nearby cinema for the premiere, but I'm not entirely sure how they're going to deal with both. My roommate hopes they'll do both at the same time, but I don't feel like sitting in a movie theater for five hours straight. XP