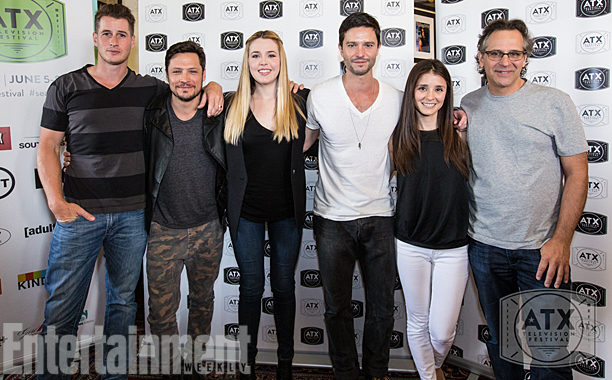 The ATX Television Festival staged a 15-year anniversary reunion of The WB’s Roswell on Sunday. Stars Shiri Appleby, Jason Behr, Brendan Fehr, Majandra Delfino and Nick Wechsler were reportedly there, along with creator Jason Katims. The sci-fi series debuted 1999 and ran for three seasons (the last on UPN) before getting axed due to soft ratings in 2002. At one point in its run, fans sent The WB Tabasco sauce (which the show’s aliens liked to eat) to try and sway the network to keep the show going. Random guest appearance: Roswell fan Nicole “Snooki” Polizzi (Jersey Shore) asked if the cast believes in aliens — and Appleby and Delfino apparently said yes. More from the panel, and above is your reunion photo. (Pictured above left to right: Fehr, Wechsler, Delfino, Behr, Appleby, Katims).