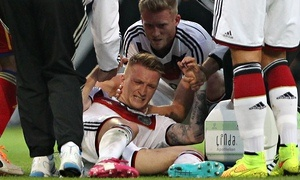 Germany's World Cup hopes suffered a severe blow on Saturday when their midfielder Marco Reus was ruled out of the tournament with an ankle injury sustained in their final warm-up game.
Germany, who take on Ghana, Portugal and United States in Group G, leave for Brazil on Saturday evening with the 22-year-old Sampdoria defender Shkodran Mustafi receiving an unexpected last-minute call-up following Reus' injury.

Reus turned his ankle shortly before the break in their 6-1 victory over Armenia on Friday in Mainz, partially tearing the anterior ligament above his left ankle on the eve of the team's departure for Brazil.
“Both for him and for us it is extremely bitter,” said the coach Joachim Löw. “Marco was in top form and both in the training camp and in the friendlies against Cameroon and Armenia left an outstanding impression. He had played a central role in our planning for Brazil.”


Reus, who enjoyed a superb season at Borussia Dortmund, was seen as a key player in Germany’s quest to claim their first international title in 18 years.

Mustafi, who won his only cap in May against Poland, was surprisingly part of the provisional squad but missed the cut as one of three players omitted from the final squad earlier this week.

“It was not about replacing Marco Reus in the same position,” Löw added. “We have a lot of quality in that position and a lot of options with Lukas Podolski, Andre Schürrle, Mario Götze, Thomas Müller, Mesut Özil, Julian Draxler and Toni Kroos. That is why we decided for an option in defence and Shkodran had been convincing in our training camp, he is fit and we have full confidence in him.”
Source
Why hasn't this been posted yet?! My poor bby Marco! :'((((
Tags: sports / athletes, sports / athletes - soccer / football
Subscribe