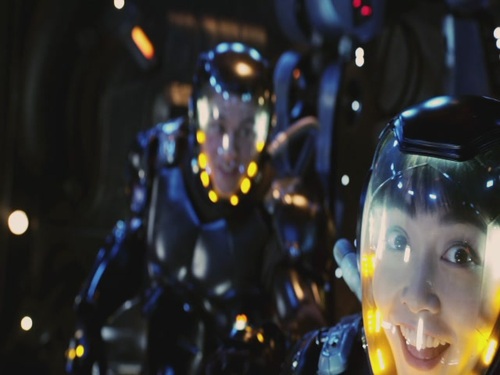 AUSTIN — Director Guillermo del Toro is currently working on a script for a sequel to his 2013 international hit Pacific Rim.

While promoting his new FX series The Strain at the Austin Television Festival, del Toro told BuzzFeed that he and screenwriter Zak Penn (X-Men: The Last Stand, The Incredible Hulk) have started work on a screenplay for Pacific Rim 2.

“I’m working very, very hard with Zak Penn,” he told BuzzFeed. “We’ve been working for a few months now in secret. We found a way to twist it around. Travis Beacham [co-writer of the first film, now working on Fox’s Hieroglyph] was involved in the storyline and now I’m writing with Zak because Travis has become a TV mogul.”

While the filmmaker stressed that Legendary Pictures has not formally agreed to put the script into production, he said that he and Penn are working on it as if it will be made one day.

“I don’t have the money, but I’m proceeding like it is happening,” he said with a laugh, adding that he hopes to tackle the sequel after producing his next project.

Del Toro also revealed that the script, as it stands now, includes the characters Raleigh Becket (Charlie Hunnam) and Mako Mori (Rinko Kikuchi) — and the story will follow the events of the first movie.

“Some people were wondering if we were going to do the prequel. I was never interested in doing that first wave of invasion,” del Toro said. “I’m going for very new, very crazy ideas on the second one, which are very different from the first one — but you will get really great spectacle.”

While Pacific Rim was a very modest hit in the U.S., grossing $101.8 million domestically, it was a sensation overseas, pulling in $309.2 million internationally (including $111.9 million in China alone). Legendary Pictures chief Thomas Tull recently told the website I Am Rogue that his production company would only makePacific Rim 2 “if we can crack the story [and] we all think it’s great,” and if del Toro is on board to direct it.

A rep for Legendary did not immediately have comment for this story.

Along with executive producing The Strain (as well as directing several episodes), del Toro is also directing Legendary’s horror film Crimson Peak with Mia Wasikowska, Tom Hiddleston, Jessica Chastain, and Hunnam, which is currently in post-production. He is also producing the animated feature The Book of Life for 20th Century Fox.