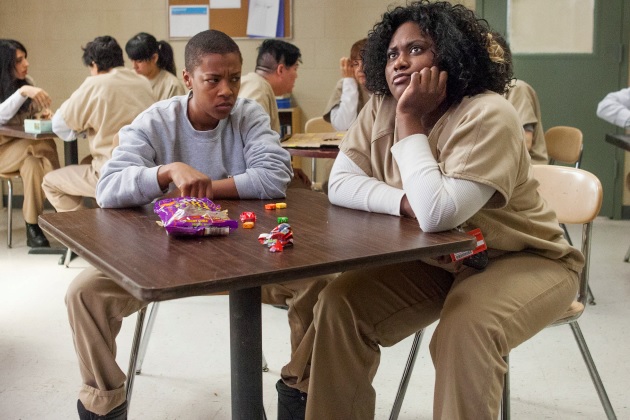 Remember to include spoiler tags when necessary!

Mere hours after Netflix premiered season two of “Orange is the New Black” in its entirety online, three of the show’s stars took the stage at the Austin Television Festival to discuss the streaming service’s critically acclaimed drama.

Uzo Aduba (Suzanne “Crazy Eyes” Warren), Danielle Brooks (Tasha “Taystee” Jefferson) and Lea DeLaria (Carrie “Big Boo” Black) were suitably impressed that most of the ATX Festival audience had resisted the urge to binge the show in the wee hours of the morning, allowing them to watch the season two premiere on the big screen at Austin’s State Theater.

While all Netflix cast members seem notoriously spoiler averse, the trio had plenty to say about the experience of filming and the groundbreaking nature of the show, which is set in a women’s federal prison and doesn’t shy away from portraying its characters in all their blunt, eccentric, sexually liberated glory.

Aduba admitted that being cast on the show changed her entire perspective on prisons and their inhabitants, revealing that she used to watch “Lockup” on MSNBC from a “voyeuristic perspective” to get a window into the closed societies of prisons, but after reading the second script for the series, “I started to stop and realize, we’re not telling stories about crime, we’re telling stories about people who happened to commit crimes. The stories we’re talking about are these people and their journey: what it is for Red to be a wife to this man — all she wants, more than anything, is to belong. That was a change just in my own life, realizing that these are people — good people can make mistakes, they’re more than just the singular adjective or descriptor that we want to put on them. They’re not just the crime or the jumpsuit — they’re someone’s mother, someone’s neighbor, they had a job, they have a parent somewhere. That was very life-changing for me.”

The stars also applauded “OITNB’s” writers for their authentic characterization; Aduba said she was especially impressed with the way Taystee is portrayed: “It opens minds up to [the fact that] we’re all more than what we might seem on the outside. I think a beautiful thing they do with Taystee is … We think this is who she is, but she’s super well read, she’s good with numbers, she’s an incredibly intelligent young lady.”

Brooks agreed, “It gets rid of this stereotype of all women in prison, what you think they are. That’s one of the reasons I love playing Taystee — she is very educated. Yes, she has that form of being in a foster home and not having a family background, but she’s proven [she can] break out of that … it’s really great for our society to take a look at how we are judging one another with all of these women.”

“It’s like I’ve died and gone to feminist lezzy heaven,” DeLaria wryly concurred. “I’ve been a professional lesbian for over 30 years — before that I freelanced — but my entire career has been about that, putting a human face on what a butch is. To be able to finally get to portray this … usually whenever you see someone like my character in some other television show, she’s stupid, she’s fighting some other dyke with a pool cue, she’s a truck driver. It’s interesting to me that not only is Big Boo smart, she’s the smartest woman in the prison – she always has a warm heart and a warm soul, she’s three dimensional and not a caricature. I think that makes us all feel very blessed to be in the show.”

Season two of “Orange” ups the ante in many ways, Brooks promised, teasing that fans can expect a number of new character back stories – including Taystee’s. “This season is very exciting. I think it intensifies to the 100th degree … a lot of cliffhangers are answered this season, but then it leaves you with some other things,” she said.

“There’s some new characters too; Vee, played by Lorraine Toussaint — she really comes in and rocks it. I’m excited for people to see that.”

“And Kimiko Glenn – she plays a character, Brooke, that just embodies that whiny liberal that you just want to smack … she’s terrific,” DeLaria added. She also promised that we can expect further insanity from Big Boo this season: “I’m just going to say one word: #peanutbutter. I’ve been getting that hashtag all day,” she said cryptically. “I just think they sit around in the writer’s room and go ‘What’s the craziest thing we can think of and who will do it? Oh yeah, give it to DeLaria.’”

An audience member noted that she appreciated the show’s examination of authority figures and their own corruption, something that Aduba agreed was one of “Orange’s” most fascinating aspects.

“I think it is really interesting that the show touches on that — who is the real criminal, and what is the real crime?” she noted, pointing out that everyone, from Mr. Healey to Figueroa to Pornstache to gentle guard Bennett, plays in moral grey areas (or crosses the line completely) on the show.

“As much as we’re invested in [Bennett and Daya’s relationship], it’s wrong, it’s completely incorrect,” DeLaria pointed out.

“And yet we forgive it,” Aduba noted.

“For Fig, you’re going to be happy to see what happens to her in season two,” Brooks teased. “The writers are so much more brilliant than what I could come up with, so I think you’ll be pleased.”

The actors said that they’re hoping to play their characters for many years to come, and shared some of their aspirations for the layered women they portray.

“I think I would like for Suzanne to have more of the same, in that I love that they continue to place her on solid ground,” Aduba said, hoping that the writers “continue to round her out [and] keep having … questions come up for her, such as the love question: what it is to love; what it means to love; how far someone will go for love; what someone will do for love. I would love to see that continuation. I love seeing her vulnerability, her willingness to just live, I’d love to see that fire continue to be stoked.”

“I’d love it if Big Boo had sex with a human,” DeLaria laughed. “Had a relationship with something other than a machine — that would be awesome, I’d love to see what would happen to Boo in an actual relationship. We’ve seen her talk about a relationship so I would love to see what the writers envision for her in that situation and how I could make it happen. I would like it if she could never get out of prison – maybe she could shoot Pornstache and get a life sentence.”