Marvel’s ‘Dr. Strange’ to be Directed by Scott Derrickson 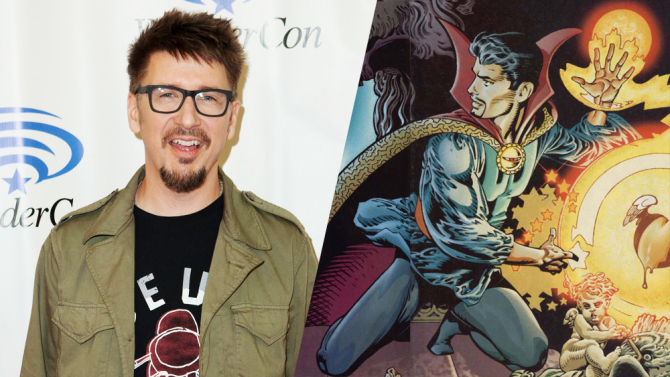 As Marvel keeps hunting for its “Ant-Man” director, the company continues to move forward with its next phase of films, tapping Scott Derrickson to helm “Dr. Strange.”

Talks are still early but sources say Derrickson, who most recently directed “Sinister,” is Marvel’s choice and a deal should be struck shortly.

The pic will be produced by Kevin Feige who repeatedly said how badly he wants to get a “Dr. Strange” movie made over the years. Executive producers on the project are Louis D’Esposito, Victoria Alonso, Alan Fine, Stan Lee, and Stephen Broussard.

The comic revolved around a former neurosurgeon who serves as the “Sorcerer Supreme” — the primary protector of Earth against magical and mystical threats. Strange made his first appearance in the 1963 comic series “Strange Tales” and would go on to have his own comic series and would appear in several other comics that included “The Fantastic Four,” “Spider-Man” and Nick Fury.

Marvel has teased Strange in several pics including “Thor” and “Captain America: The Winter Soldier” and Derrickson commitment only moves things forward in getting the good doctor is own pic.

While Marvel is in the midst of finding a director replace Edgar Wright on “Ant-Man,” Dr. Strange is something Feige and Marvel have always been excited about getting into production and this puts them one step closer to their goal.

Derrickson and Marvel will now look to cast its title character and while there is no front-runner at the time expect a decision in coming months.

Derrickson has been a rising star that Hollywood has been chasing for their big projects after the success of his horror pic “The Exorcism of Emily Rose,” which earned $144 million at the worldwide box office.

He followed that up with another horror pic “Sinister” which overperformed again at the box office and helped gained the attention of Hollywood execs around town. With execs always looking for directors that can pull the most out of their budgets, Derrickson is a very attractive talent with both “Sinister” and “The Exorcism of Emily Rose” costing less than $20 million but bringing in more than double that in profits.

Marvel is hoping Derrickson can bring the same dark and eerie story-telling style to the “Dr. Strange” story while also not breaking the bank on the budget.

He is repped by WME and Brillstein Entertainment.

His next pic “Deliver Us From Evil” bows July 2 and stars Eric Bana and Olivia Munn.

My next movie will be STRANGE: pic.twitter.com/5pdbO6Op6j