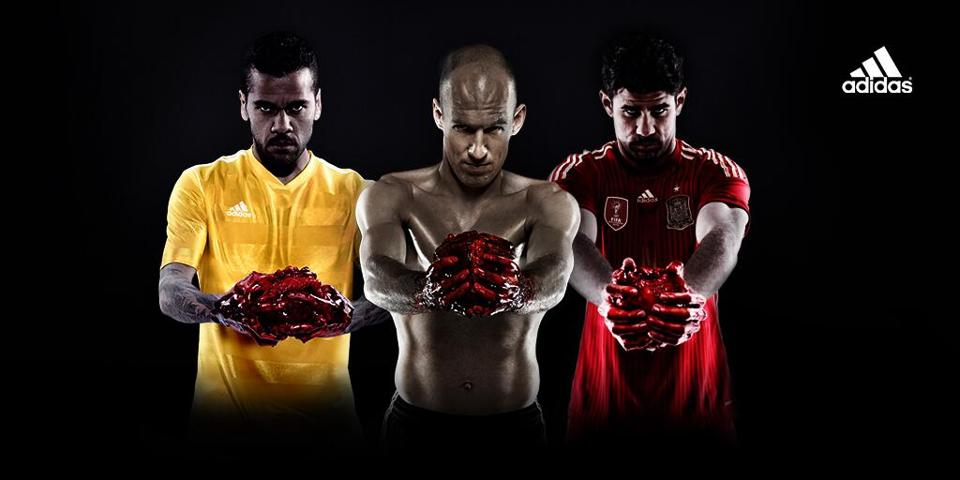 Adidas has launched a new campaign featuring footballers holding bloody cow hearts and pledging to give their own for their country at the World Cup. The likes of Dani Alves, Arjen Robben, Diego Costa, Lukas Podolski and Nani all posed for the menacing ads in varying degrees of shirtlessness.

Obviously, tearing their own hearts out of their chests for a sportswear company would've been self-defeating to their stated goal of doing whatever it takes to help their teams in Brazil, but the equally unnecessary alternative of using cow hearts has naturally upset animal rights activists, particularly those in Germany who took issue with the ad starring German national team member Lukas Podolski.

A spokesman for German animal rights group Four Paws said: 'He says he'd give his heart but it wasn't his heart was it? It was the heart of an innocent animal. If this was supposed to be some sort of PR stunt, then it misses the point. 'It's bad enough that animals are slaughtered for food but to parade a heart, dripping blood and gore, is hardly a good way to advertise a sporting goods firm.'

But Podolski replied, "I don't find it disgusting. It just shows my promise to give my heart in our bid to win the World Cup. I and the rest of the team will give it all for Germany." Which doesn't really address the opposition to the ad, but does present the mental image of airport security finding loads of cow hearts in the German players' bags.

How far will you go? I will give my heart for my country. #allin or nothing. pic.twitter.com/QrPCfu7CYL

I will give my heart for my country. #allin or nothing #Adidas #Football #Brazil2014 #Poldi #heart pic.twitter.com/XXIpqDs0jI

I will give my heart for my country. #allin or nothing pic.twitter.com/w46iyTKkOC