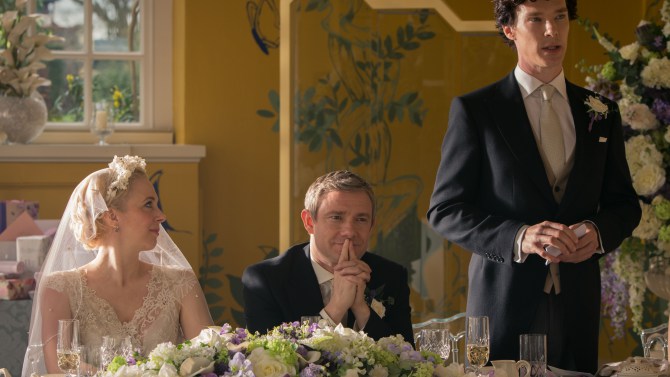 Rejoice, Sherlockians/Sherlock Holmies. While the fourth season of “Sherlock” is still in limbo, season three will stream exclusively on Netflix starting Monday.
The service will also stream three half-hour behind-the-scenes specials titled “Sherlock Uncovered” following each episode. This will culminate in an hour-long feature, “Unlocking Sherlock,” about the making of the British drama.
Exec producer Steven Moffat and his wife, producer Sue Vertue, talked to Vulture about the hit series, but were unable to divulge details about when new episodes will be shot.
“We’re literally in the middle of working out what we’re doing and the dates we’ve got,” Vertue told Vulture. “It’s a bit of a watch-this-space, I’m afraid.”
They were also coy about a “Sherlock” standalone special, which star Martin Freeman teased last month.
“It’s all going in the right direction,” Moffat said, dodging the question. “There’s nothing to worry about. Everyone’s very willing to make it work.