At noon (PST) today, Oregon became the 18th state (19th if you include DC) to legalize gay marriage! 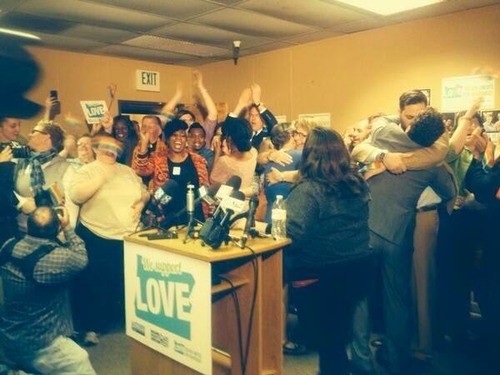 SALEM, Ore. — A federal judge struck down Oregon's ban on same-sex marriage Monday — an hour after a federal appeals court denied a request to stop the decision.

Gay couples began the process of getting married immediately. Couples lined up outside Portland-area courthouses before the ruling in anticipation of getting marriage licenses.

"I'm not worried or concerned or nervous about it," said Shilpi Banerjee, who was in line with her partner outside Multnomah County headquarters; they received their license within minutes of the ruling and plan to marry Monday evening. "It's just an idea whose time has come."

The ruling from federal District Judge Michael McShane in Eugene, Ore., throws out a state constitutional amendment that 57% of those voting approved in 2004, declaring that marriage is only between one man and one woman. Before that, state law prohibited same-sex marriage. Four couples challenged the state amendment as federally unconstitutional in fall 2013.

"All of the plaintiffs share in the characteristics that we would normally look to when we describe the ideals of marriage and family," McShane said in his ruling. "They present in the record as loving and committed couples who have established long-term relationships."

McShane himself is gay but said in court last month that he had no plans to wed his partner.

Now 18 states and the District of Columbia have legalized same-sex marriage. Judges in seven other states have struck down bans on gay marriage though appeals are pending in some states. More challenges are pending.

In February, Oregon Attorney General Ellen Rosenblum, a Democrat, announced that her office would not defend the state's ban on same-sex unions. She told reporters at the time that her lawyers could find no valid reason to deny marriage licenses to gay couples.

Last week, the National Organization for Marriage asked to intervene and defend the constitutional amendment since the state would not.

On Wednesday, McShane told the organization that a private group couldn't intervene "simply because the organization disagrees with the interpretation" of state and county officials. Then the National Organization for Marriage filed an emergency motion asking the 9th U.S. Circuit Court of Appeals to stop McShane from issuing his noon PT decision.

The National Organization for Marriage has said it plans to appeal McShane's decision from last week.

Gay-rights groups previously had said they collected enough signatures to force a statewide vote on gay marriage in November. But they said also they would discard the signatures and drop their campaign if the court ruled in their favor by May 23.

One of four couples who are plaintiffs in the Oregon suit, Deanna Geiger and her partner Janine Nelson, planned to marry Monday afternoon at the Multnomah County marriage license office.

In Marion County, Salem resident Lee Nichols and Jorge Gonzalez were the first couple to register for a marriage license at the clerk's office.

The couple met about nine years ago when the retailer Old Navy sent Nicholsfrom Portland to Salem for employee training. Gonzalez worked at the Salem store, and the couple says the rest is history.

"It's a humbling thing to get married," Nichols said.

The state generally has a three-day waiting period before marriage licenses become valid but several county clerks have said they will waive the requirement.

Multnomah County, the state's largest county that includes Portland, briefly issued marriage licenses in 2004 to same-sex couples, and about 3,000 couples were allowed to marry before a judge halted the practice. The Oregon Supreme Court later invalidated those unions.

"My decision will not be the final word on this subject, but on this issue of marriage I am struck more by our similarities than our differences," McShane wrote. "I believe that if we can look for a moment past gender and sexuality, we can see in these plaintiffs nothing more or less than our own families. Families who we would expect our Constitution to protect, if not exalt, in equal measure."

Hope it's okay to post this, mods! I'm sure there are some gay celebs in Oregon...

UPDATED SCOREBOARD: States with marriage equality: 18 States where cousins can marry: 25 Getting closer!