Inside the head of Rupert Grint 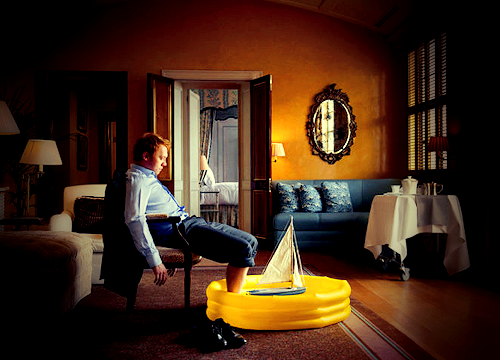 What is your earliest memory?

My first birthday. I’m sitting in a pushchair, surrounded by lots of people. We’re at some kind of summer fête in a car park. I’m looking at a large birthday cake in the shape of a train and I’m watching my mum cut the first slice. I’m thinking, ‘Life is good.’

What sort of child were you?

I wouldn’t say I was a mischievous child but I was very manipulative, particularly with my younger brother. Apart from that I was quite a shy kid. I found my confidence in acting. Then, at the age of 11, I was cast as Ron Weasley, and my life completely changed. Suddenly I was doing what I loved for a living.

What are you best at?

Disguising myself. It comes in handy at music festivals. When I first started going to Glastonbury, I’d get people wanting to pick me up and carry me around on their shoulders, which got a bit tiring. Then I decided to start wearing animal masks while wandering around the site. Everyone looks a bit weird at festivals, so a man dressed as an alligator is not going to stand out.

I’ve always fancied myself as a singer but I know I’m not very good. I’m comfortable doing a Leo Sayer turn at karaoke. I do a passable You Make Me Feel Like Dancing. In the new Postman Pat film, I get to sing a song called Struck By Lightning, which is a bit of a toe-tapper. But, sadly, I’m no Sinatra.

Tell us a secret about yourself.

I like to carve sculptures out of crayons. I started doing it to pass the time on the set of the Harry Potter films. Throw an idea at me and I’ll turn it into a crayon sculpture – anything from a baby squirrel to Harvey Keitel’s head. My favourites are busts of Shakespeare, Abraham Lincoln and Bill Murray. I’m about to do a Ronnie Corbett, which would require a smaller crayon.

Who would play you in a film of your life?

Eddie Murphy has got a good track record of playing multiple characters. He could play me, all my family and all my friends. It would be a Rupert Grint version of The Nutty Professor. It would be worth buying a ticket to see Eddie Murphy in a ginger wig.

What’s your most treasured possession?

I’m a big fan of the painter Bob Ross. For a long while I’d had my eye on a painting of his entitled Alaska, a very simple but very beautiful landscape. It came up for sale and I managed to buy it fairly cheaply from a Canadian gallery.

What was the best night of your life?

The 2006 NME Awards. I was meant to pick up an award for Harry Potter And The Goblet Of Fire but I got there late, so Jarvis Cocker accepted on my behalf. I had a great time mingling with The Arctic Monkeys and Franz Ferdinand, but I find myself a bit tongue-tied in the company of my pop heroes. I get overawed meeting anyone famous. If I bump into Alan Titchmarsh or an EastEnders actor, I lose the ability to speak.

What’s the biggest star name in your contact book?

In 2008 I met Dizzee Rascal at a basketball match and we swapped numbers. I’ve kept the number but never plucked up the courage to ring him. I doubt if he’s sitting there wondering whether I’m going to call. Maybe I’ll give him a bell tonight.

What has been your most embarrassing moment?

On the set of Harry Potter I drew a really grotesque picture of Alan Rickman (Professor Snape). Then I found out that he was behind me, watching me draw. Luckily, he took it well.

Who do you most admire?

I’ve got a lot of time for Richard Dawkins. Just recently I finished reading The God Delusion and it struck a chord with me. I’ve got a bit of an obsession with religion and how it affects society. I went to a Catholic primary school and religion was fed to me quite aggressively. Now I’m a lot more curious and open-minded.

What do you believe in?

I’ve always been fond of the expression, ‘You can’t polish a t**d, but you can roll one in glitter.’ That’s always made complete sense to me. There’s a lot of wisdom in those words.

What’s the worst thing you’ve ever said to anybody?

Asking a woman when the baby is due, then realising that she’s not actually pregnant. That’s happened to me quite a few times and you just want the ground to open up.

I’ve always been fond of the word ‘phlegm’. I like the fact that it’s difficult to spell. It’s a word that features a lot in my everyday life because I’ve always suffered from sinus problems.

What’s the closest you’ve ever come to death?

In my late teens, a friend of mine was giving me a lift from Brighton to London in his Mini. He fell asleep at the wheel and veered into the central reservation in the fast lane.

Who would your dream dinner date be?

I wouldn’t mind bringing Vincent Van Gogh back from the dead and cooking him a meal. I’d love to talk about his paintings but I’d be more interested to find out why the fella chopped his ear off. I’d probably save that conversation for the pudding course.

Rupert is also an ambassador for Starlight Children’s Foundation. starlight.org.uk

this quirky ginger prince. (Can't wait for him to start filming Moonwalkers)