Miley proved she Can’t Be Tamed despite her recent sickness, as she brought her Bangerz tour and a giant inflatable Floyd to London…

Having spent more than two weeks recovering from a sinus infection and allergic reaction that left her hospitalised, the jury was out on whether Miley Cyrus would be back to her twerking best, as her Bangerz world tour finally resumed at London’s O2 Arena on May 7. As it turned out, her Smilers had nothing to worry about. 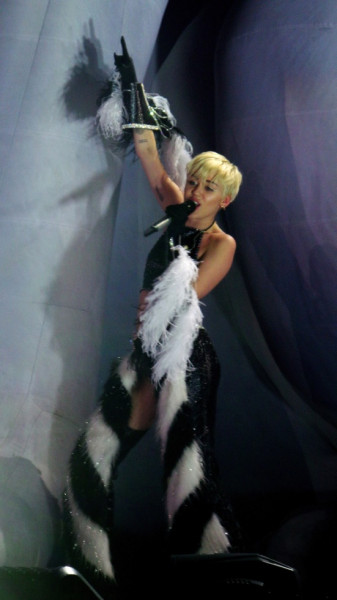 Feeling: With hundreds of balloons already suspended from the arena ceiling, support act Sky Ferreira warmed up the crowd with a 30-minute set, including singles I Blame Myself and You’re Not The One. Come Miley time, a huge projection of her face appeared on stage, her now-infamous tongue slide popped out and in slid Miss Cyrus to some of the loudest cheers we’ve ever heard.
The Look: With Miley’s looks from the US leg of her tour well documented, we were excited to see some brand new outfits for the UK, like the Swarovski crystal embellished bodysuit she initially hit the stage in… complete with lip and tongue adornment, of course. A minor wardrobe malfunction saw the Adore You singer stuck with a skirt temporarily around her ankle, to which she announced: “I look better with less clothes on anyway. Y'all should see me naked.” Classic Miley. Our favourite fashion moment? When, for her second encore Party In The USA, Miley donned an update on Geri Halliwell’s Union Jack dress. That’s one way to win over a London crowd – not that Miley needed to.

Tunes: The impressive setlist saw Miley run through recent material from her Bangerz album, including opening track SMS (Bangerz) and 4x4, during which she twerked atop a gold Hummer. A giant inflatable version of her beloved dog Floyd (RIP) appeared on stage during Can’t Be Tamed, which only made the crowd cheer harder, before Miley descended on to a smaller stage in the middle of the arena to sing a selection of covers. Announcing that she had been asked to “sing a song by a British band, because the British fans will like that,” she launched into Arctic Monkeys Why’d You Only Call Me When You’re High, following it with godmother Dolly Parton’s Jolene, Bob Dylan’s You’re Gonna Make Me Lonesome When You Go and Lana Del Rey’s Summertime Sadness. Amongst the tongue flashing and the twerking, it’s easy to forget that Miley is – first and foremost – an incredible vocalist, with ballads Adore You and Wrecking Ball really allowed her to show off her range and that delicious Nashville twang.

Banter: There was plenty of chat from Miley throughout the show, from her entering with a sea of F-bombs about how the doctors in hospital “tried to f**king kill me”, to her asking the crowd, “Are you lot sl*ttier than America?” Before she launched into Adore You, Miley sprayed water from her mouth all over the front row, then announcing, “Now that you guys in the front are all wet, this one’s for the guys in the back who I can’t reach…” Oh, and did we mention she’s got “the biggest wiener in London”? That’s the giant hotdog she rode across the stage, in case you were wondering.

Sweat Factor: Her tiny leotards ensured that Miley kept her cool, but the same couldn’t be said for the massive audience, who fist-pumped, swayed, twerked and screamed their way through every song. Hot stuff.

Summary: A massively energetic performance, flawless vocals and some cracking banter proved that Miley is back with a bang. Her versatility – seamlessly gliding between country tracks and high octane pop anthems – is unrivalled and we can see exactly why she’s adored by her Smilers. Come back soon, Miley?