Admits to only knowing handful of sister’s popular singles, basically confirms there won’t be a North American tour 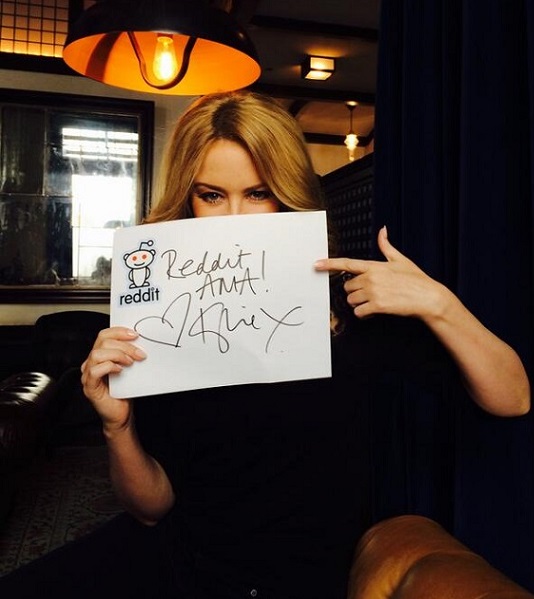 Your album X was (and remains) criminally underrated. Critics were miffed that you didn’t discuss your cancer battle more on the album but there are (I think) undertones of body awareness all over the album. What was your mindset going into the making of X – more specifically, post cancer?
I actually wrote a number of songs that expressed my feelings at that time. Most notably, the song called "No More Rain" [which I loved performing on the X 2008 tour ] - but it's true, not so many of them made the album. It was a time where I was trying to be positive and find a way out of the darkness, whilst accepting what I went through and what was still happening to me. So both types of songs were very important to me at the time. Thanks so much for the appreciation of X.

I love Kiss Me Once beginning to end. And true to a Kylie album, I love each song on their own merit. What I really love is Mr. President. How did that track come to be on the album?
An Australian DJ / Producer, Tommy Trash, had the track, and had been playing it at his gigs and festivals. Kelly Sheehan then wrote the top line for it. It's a fun tongue in cheek song over a killer track.

Why did you choose to make a raindrop cover for #KissMeOnce?
Well, let me just tell you why: there's a line in the title track, Kiss Me Once, which says "one tear falls, tension cracks the walls, and relief comes." So the water represents tears, tears of joy, tears of happiness, of letting go when a teardrop falls, and of starting over. The album is so much about new beginnings.
Can you tell us something new about your next "Kiss Me Once Tour"? =D
Aside from me being insanely excited about it?
After the absolute flamboyance of the Aphrodite tour, I'm keen to reflect the tones and themes of the Kiss Me Once album. Feminine, cheeky, emotional electronica! As always, we'll include as many fan favorites as possible from my back catalog.

Do you have any rituals or superstitions before a show?
I used to have a few, I couldn't stand it when my dresser wouldn't have my shoes in the right alignment, when they would reverse them so the left was on the right on the floor. Stupid little thing, but it would drive me crazy. I would also never put my costume until my tour manager called 20 minutes to showtime down the corridor. These days I've tried to let go of superstitions. We do one thing which is more of a tradition than a superstition, which is a little nip of scotch with my dressing room team.

Will North America (specifically Canada) be getting to see the Kiss Me Once Tour?
I will do my best. I've loved performing in Canada.

Hey, I'm from Brazil and I absolutely LOVE everything about your music. Is there any plans for coming here with this new tour? I just love watching your tour DVDs and all, but I wasn't able to go that one time you came here, and a concert of yours is a MUST SEE LIVE ocasion!
I absolutely loved performing in Brazil. You are an amazing crowd. And I'm sorry you missed my show. But you're doing some great homework. And I hope to see you soon.

Only Kylie can make an anti tour and be on top. What are the memories of that tour?
Liberation. It was an antidote to the excesses of the Aphrodite Le Folies tour. It was a slightly crazy idea but a great one to share with superfans, and the most amazing opportunity to perform songs which don't normally make it into the big show. There was a lot of love in the room and if I could, I would definitely do it again.
Is there a music video for ''Les Sex'' planned?
There isn't one YET! But the routine we do on the live shows is really fun. The band, dancers and I LOVE performing this song!

Hi Kylie, I was just wondering what your favourite song is to perform live?
How long is a piece of string?
Ha!
Another really difficult question. A current favorite is Les Sex.

Massive Minogue sisters fan over here. I begin to wonder what are your all time favorite Dannii single and album?
The songs: Put the Needle on It, I Begin to Wonder, and This Is It. (lmao couldn't even google a random album track to make it sound like she pays attention to Dannii)

What is your personal favorite album from your body of work? Least favorite?
Ahhhh the $64,000 question. Well there's a few to choose from now. Which is already a dream come true. Naturally my favorite is the current one, because it's an exciting time with the release and working on the tour later in the year. It's always exciting when an album starts to connect with the fans and take on a life of its own.

Can you still fit in THOSE hotpants?
Probably. I have no way of confirming this, as they are now in the Smithsonian (well, just about, they're in the performing arts museum in Melbourne along with just about all of my costumes & wardrobe). They can only be touched with white gloves. All of the items in their museum are handled by staff wearing white gloves, which is hilarious to me because all of that wardrobe is part of who I am, so much of the pieces have been through quick changes, thrown here, thrown there, working clothes. But I'm thrilled to have donated all those pieces because they'll be taken such good care of.
Kylie; I've had quite a crush on you for years. Whenever a song of yours comes on the radio or I see a cd of yours in the store my wife gives me a big grin and sort of a "knowing look" and pokes fun BUT she says if I ever had the chance to ask you out: I could.
So Kylie with the whole Internet watching, with bated breath i'm sure, and my wife having a laugh at me, I have to ask: will you go out with me?
Where would we be going?

WTF? That is so simple?
Kylie I am 6'1, well educated and funny. I'd like to take you out to dinner next week.
To quote Madonna's AMA: send photo.

Alright. Since OP doesnt respond im gonna make the move. How about Chuck-e-cheese?
Hmmm. I don't even know what Chuck-E-Cheese is?
I tried to pull most of the music and tour questions and there's quite a few more questions answered at the source.
Tags: kylie / dannii minogue
Subscribe