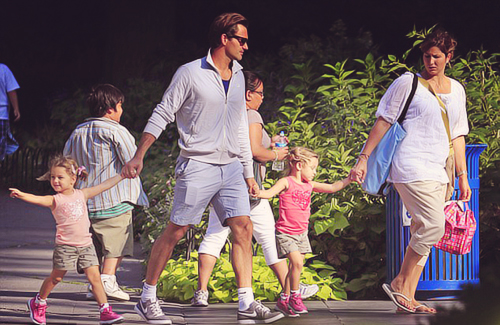 Mirka and I are so incredibly happy to share that Leo and Lenny were born this evening! #TwinsAgain #Miracle

Roger and Mirka met both representing Switzerland in the Sydney Olympics, and married in April 2009. They had their twin girls Myla and Charlene Federer on the 23rd July the same year.

Earlier today Federer pulled out of the Madrid Masters tournament to be with his wife issuing the statement:

I’ve decided to withdraw from Madrid to be with my wife Mirka during these next few exciting weeks for our family. I apologize to my fans and hope to be back in Madrid next year. I’ll be training near my home, and am excited to rejoin the Tour soon!

Federer had recently said he would be willing to miss any tournament, including Roland Garros, to be by his wife's side for the birth.

@AnaIvanovic @rogerfederer You mean for six of them?????

@rogerfederer Roger has done it again!!!well done and all the best for the family!!#twins

“@rogerfederer: Mirka and I are so incredibly happy to share that Leo and Lenny were born this evening! #TwinsAgain #Miracle” Congrats Rog!!

@rogerfederer Felicitaciones, Roger! Please give my best wishes to Mirka. Hope to meet the babies soon!

Congrats to Mirka and @rogerfederer on the new addition to the #family ! #Leo and #Lenny will partner perfectly their older sisters in mixed

A BIG Congrats to @rogerfederer and Mirka on the birth of twin boys!!! How lucky is that? Two girls, two boys...great news!

Double congrats to @rogerfederer and Mirka for their new paternity!!👏Twins again👏Omg!!

Congrats to @rogerfederer on his 2nd set of twins!! This guy has gotta leave some records for the rest of us. #OverAchiever