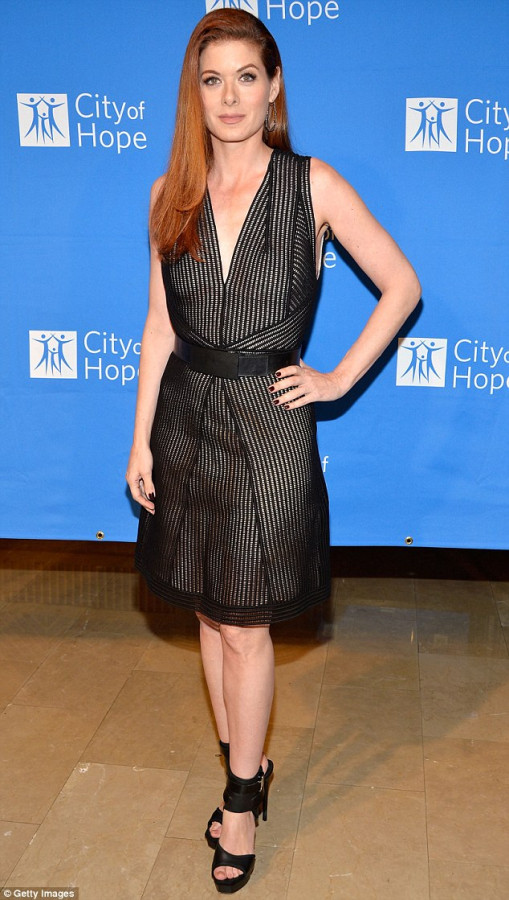 Debra Messing has a hot new body and she wants to show it off.

On Monday the 45-year-old actress looked lean in a flirty black cocktail dress with a plunging neckline and knee-length hem as she attended City Of Hope's Spirit Of Life luncheon in New York City.

In April the Will & Grace star told ABC News she had lost 20 pounds by replacing 'crappy foods' such as pizza and french fries with green vegetables.
The redhead was joined at the event, which took place inside The Plaza Hotel, by actress Jane Krakowski and Good Morning America host Amy Robach.
Designers Ken Kaufman and Isaac Franco were also in attendance.
Awards were given to 'women of distinction, women who triumph over life's tribulations whether personal or universal,' according to the City Of Hope website. 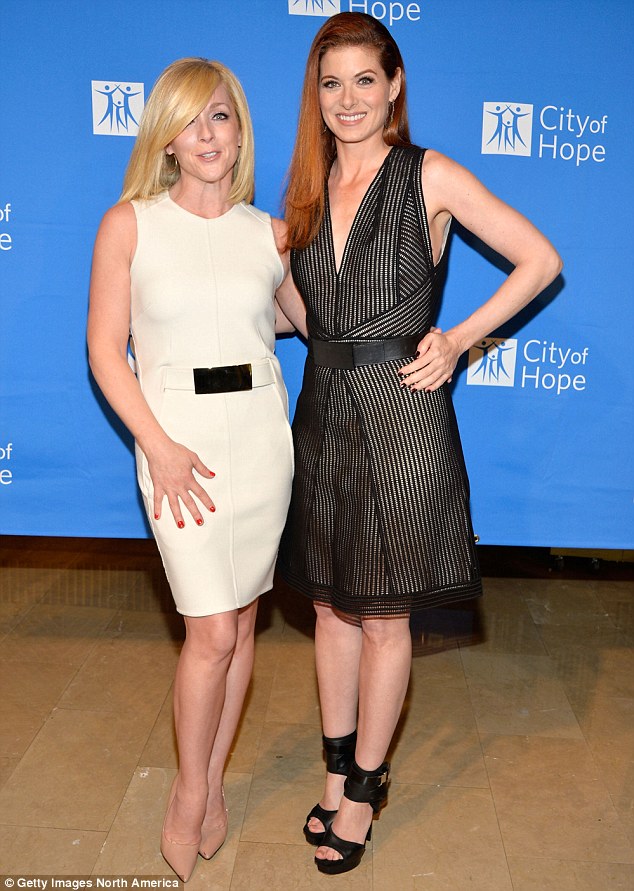 Fabulous in their forties: Messing was joined by Jane Krakowski; they're both 45-years-old

Messing has said she changed her diet three years ago.

'I made a very, very big change [to] the way I approach nutrition,' she explained. 'I think it made a big difference in how I look, or at least how I'm perceived to look.

'I lost like 20 pounds,' she continued. 'It wasn't my intention, that wasn't why I made the change. I made the change because I was just tired all the time. For a long time, I just accepted that was the plight of a working, single mother. You're juggling everyday.' 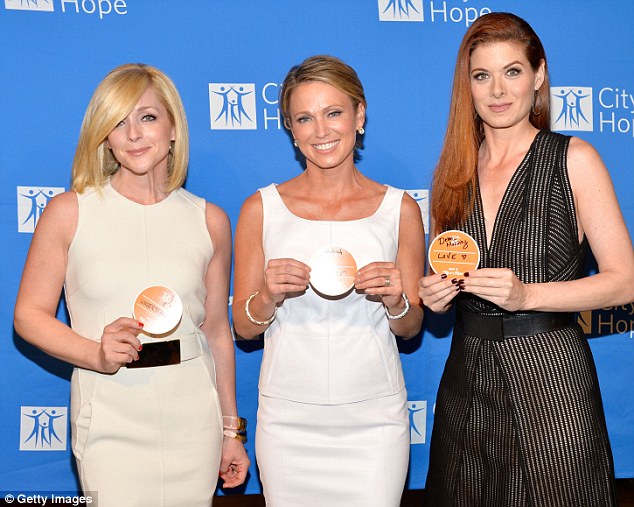 Proud to be a part of it: The Will & Grace star (right) stood with Jane (left) and Good Morning America's Amy Robach (center)

Admitting she was 'just stubborn' when it came to her eating habits, she said: 'Obviously I knew there was an association between what I ate and whether I gained 10 pounds or lost 10 pounds, but it never really became a reality for me that it shows on the outside - in your hair and skin and even the clarity of your eyes.'
But with her new routine of eating 'really, really clean, healthy foods', she immediately noticed she not only felt better, but looked it, too. 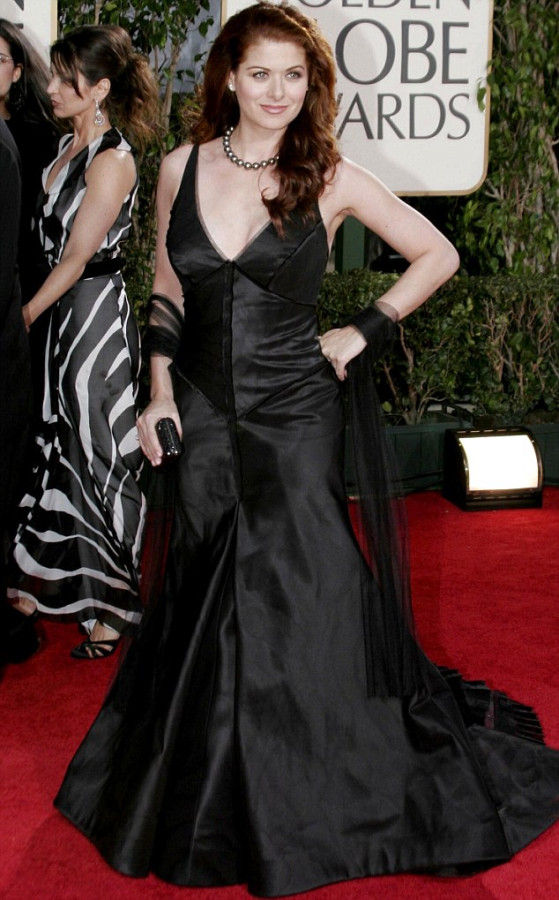 When she was fuller: In January 2005 at the Golden Globe awards

Living the busy life of a working actor, the mom-of-one now makes an effort to start her day the way she means to finish it, feeding her body with the necessary nutrients it needs to maintain her lifestyle in the form of a healthy green juice.

Kale, spinach, celery, cucumber, ginger and lemon is her combination of choice, which she said helped see her through gruelling 17-hour days on the set of new series The Mysteries Of Laura.

'At least I know I'm starting my day and getting a big shot of nutrients that I need. I start out strong...' she said. 'For the pilot, I was shooting 15, 16, 17 hours every day. I really depended on having that juice once or twice a day. It really gave me more energy.

She added: 'That made an obvious difference for me, in me feeling strong.' 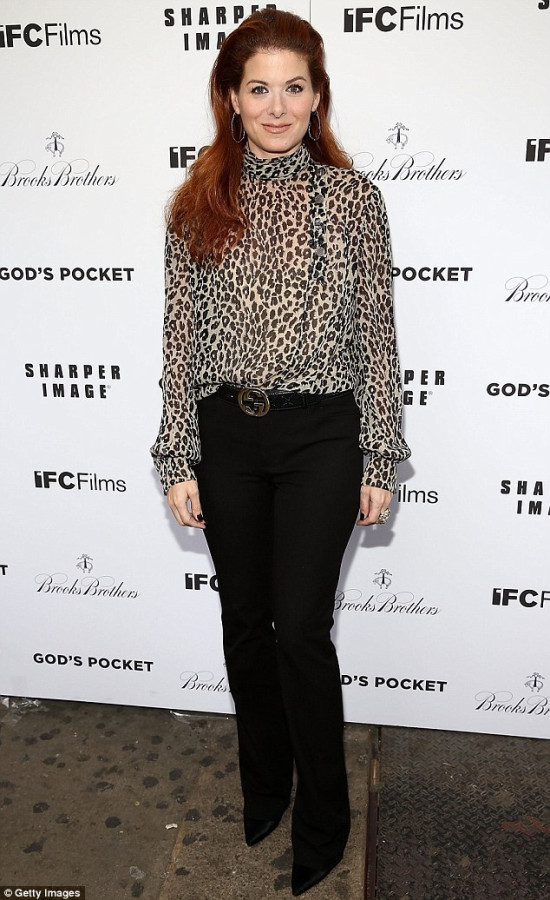 Lean lady: On Sunday evening in leopard at the God's Pocket premiere at the IFC center

Like many Americans, Debra 'grew up on fast food and candy every day', which can certainly be a tough habit to break.
'Pizza and french fries and burgers - I love food and I've always loved food,' she admitted. 'Vegetables were not a part of my life at all.'

The flame-haired star split from husband Daniel Zelman in December 2011, after almost 11 years of marriage, while the couple continue to co-parent their 10-year-old son, Roman.

Since 2012, she has been in a relationship with former Smash co-star Will Chase, who can now be seen as country music star Luke Wheeler in ABC's Nashville.

Meanwhile, Debra will herself soon return to TV screens, having recently wrapped filming on the pilot episode of NBC series The Mysteries Of Laura, alongside Josh Lucas, in which she plays homicide detective Laura Diamond, who is better equipped to handle dangerous criminals than to wrangle her twin children. 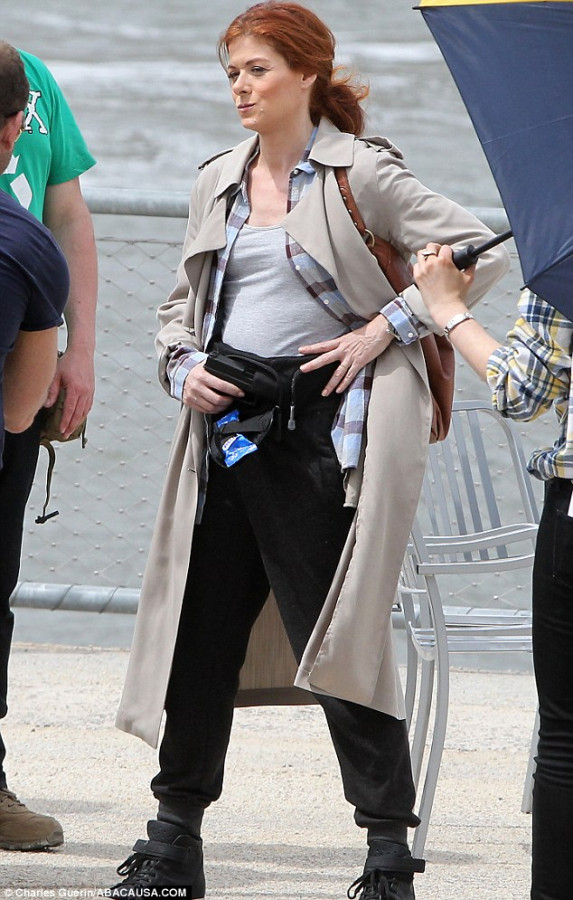 Back on the beat: The Will & Grace favourite just wrapped filming on the pilot episode of NBC series The Mysteries Of Laura, in which she plays homicide detective Laura Diamond, alongside Josh Lucas - pictured here on location in New York on April 14 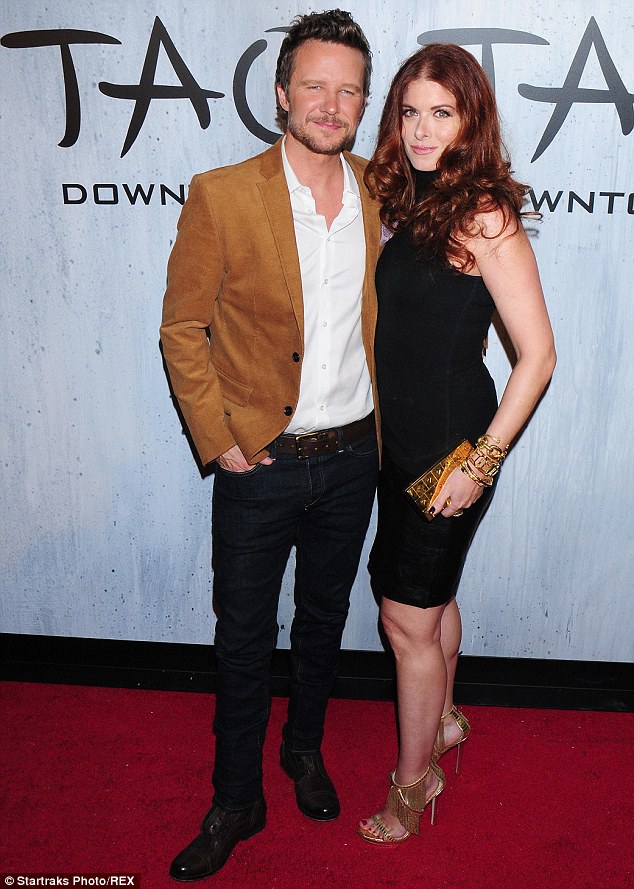 Still going strong: Following her December 2011 split from husband Daniel Zelman, with whom she has a 10-year-old son, Roman, the actress began dating Smash co-star Will Chase in 2012 - pictured here together in September last year