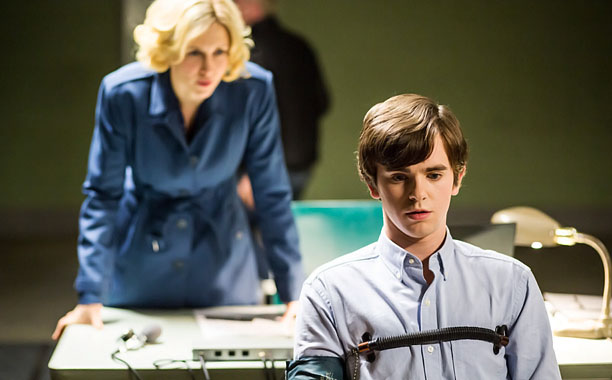 [WARNING: The following story contains spoilers from Monday's Season 2 finale of Bates Motel. Read at your own risk.]

On Monday's Season 2 finale of Bates Motel, Norman Bates (Freddie Highmore) was once again visited by his alternate personality, which takes the form of his mother Norma (Vera Farmiga). Although this phenomenon first occurred in the Season 1 finale when "Mother" told Norman to kill his teacher Miss Watson, this time around, Norman's alter ego was a little more helpful.

After Norman was rescued by Dylan (Max Thieriot) and Sheriff Romero (Nestor Carbonell) from the box Nick Ford stuck him in on the penultimate episode, Norman confessed to Norma that he now recalls the memories of killing Miss Watson he'd previously repressed. But when Norma refuses to accept the truth, Norman begins crossing things off his bucket list in preparation to kill himself. Norma intervenes, however, and convinces Norman to hand over the gun and keep quiet about his murderous secret.

Unfortunately, Sheriff Romero insists that Norman take a polygraph test to prove he didn't kill Miss Watson. But when the dreaded question arises during the test, "Mother" appears and convinces Norman that he didn't kill Miss Watson; she did. With his split brain fully convinced on his innocence, Norman passes the polygraph test with flying colors.

But is the innocent and lovable Norman slowly slipping away? Is Norma's city council seat — and therefore her motel — in jeopardy? And why does Romero want Dylan to take over the White Pine Bay drug trade? TVGuide.com took all our burning questions to executive producer Kerry Ehrin. Plus: What's ahead in Season 3?

How did you decide that Norman would consider suicide?
Kerry Ehrin: Norman told us that's what he would do. It makes perfect sense that a guy like him, if he found this information out, [thinks] that's the honorable way to handle it. It's just muddied by his relationship with his mother and how much she needs him. It puts him in a position where he's torn between doing the right thing and not wanting to abandon her. [Ultimately], Norma's fantasy version of what's going on wins over what Norman perceives as reality. It's a testament to the power of Norma, how much influence she has over Norman, and how much she actually believes she's right.

When Norman actually says, "You win, mother," does he truly believe her? Or is he just giving in again?
Ehrin: I believe to have his relationship with his mother, he will always have to have one foot in believing the fantasy. He does not totally believe it, no. He gives into her at that moment because he can't bear to crush her. So he's basically stuck. He has to continue trying to be the person that she believes him to be and that he wants to be, but he has this awareness and this fear that he is something else.

Is that why Norman agrees to take the polygraph test? So the truth can come out in a way Norma can't control?
Ehrin: Yes. When he goes into the polygraph test, he is much less anxious about it than Norma is. It's no longer in his hands what to do with that information, and I think he's resigned when he goes in there. He just wants to stop fighting the truth.

But the truth doesn't exactly come out. Norman again sees a vision of Norma that convinces Norman he didn't kill Miss Watson. Is the alternate side of his personality getting stronger?
Ehrin: It is. It's more of a genuine emergence of this distinct other personality that actually has the power to influence not only Norman Bates' brain, but his entire body. When she tells him that, his body relaxes and he passes the polygraph test. So, it's that tied into him at this point.

So, Norman's mental disorder is getting worse?
Ehrin: Yeah. Dissociative identity disorder is activated by stress. When the person feels like they can't handle something, that it's too overwhelming or too scary, they retreat into themselves and they send out this other person who they think can handle it better. Norman's definitely sinking more and more into this, partly because he's dealt with a hell of a lot of stress in the last three years.

That last shot of Norman was creepy. Will we see him stay in this darker mode next season, or will he flip back and forth between Norman and "Mother"?
Ehrin: It will definitely flip back and forth. If you look at Psycho, Norman Bates is incredibly likable. He's incredibly sweet. It's one of my favorite things about the movie is just how freaking adorable and likeable he is. That's always going to be a part of who this character is. He is a good kid who is deeply messed up and who doesn't know what he's doing.

Norma's devotion to her son ruined some of her other personal relationships. Will she ever be able to find a balance?
Ehrin: Norma's journey is about trying to live her life in a healthy way versus [living with] this incredible fear of abandonment. She doesn't want to let Norman go on a very deep level, and it's impossible to have a normal, healthy relationship when you're that terrified inside. But I don't think she's enlightened enough about herself to be able to know that, so she's going to keep trying. She's about that dream that it's all going to work out, that they're going to have a happy life. That's part of why we love her.

Norma did get some healing in her relationship with Dylan. Is there hope for this family unit yet?
Ehrin: I think that was definitely a surprise to Dylan that Norma bought him a ticket. It was just a lovely moment because it was everything he ever wanted to hear. "You're part of this family and you add value to us." And the fact that she could apologize to him was a huge thing for her. That's a huge growth for Norma Bates, and that moment of victory that they had was really nice because we don't get to have a lot of those. Dylan is going to be more connected to them as we go forward.

Romero seemed to be pushing Dylan toward taking over the drug trade in White Pine Bay in order to keep the status quo. Does Dylan have a choice in the matter?
Ehrin: I don't think Dylan's mind is made up at the end of this season. I think he's seen a very, very dark side of that whole business. He might be intrigued about going into it, but I think if he did, he would want to do it on his own terms. Whether or not you can do it your own way in that environment in White Pine Bay remains to be seen. Also, what does Romero want really? It's a really interesting question. He's so controlling and quietly manipulative. What is his take away from all this? Why does he want Dylan to do this? That's a cool question that we'll be able to explore more.

Now that Norman has passed the polygraph, is Romero satisfied? Or will he keep his eye on the Bates family?
Ehrin: I don't think Romero buys hook, line, and sinker that everything is totally normal. Norman has answered the legal question with the polygraph test and Romero's going to put it to bed legally. But he's still going to wonder, and he's still going to have his eye on Norman. And it's still going to be complicated by Romero's growing relationship with that family and all the ways that he's tied into them. In his Romero way, he has feelings for Norma. I don't think he'd ever say that out loud at this point, but there's definitely something going on there.

So, what can we expect in Season 3?
Ehrin: There's this whole thing about the city. What's going to happen with the drug trade and how is that going to affect the city? Plus, there's the motel and the road and [the Bates] becoming more isolated. Season 3 is definitely about a deepening of the family. Emma is going to be pulled more intimately into the family. Norman will be trying to look after his mom a little bit more, maybe run the motel more. He's going to be graduating from high school and trying to step up and be a man in the traditional sense of what that word means. But all the time he'll be fighting this darker part of himself, the question being which side will win.