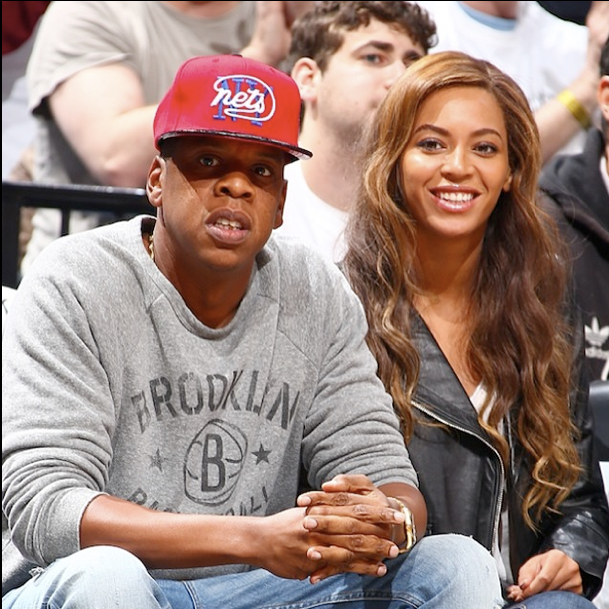 They may not be seeing eye-to-eye lately, but both Jay Z and Drake were in attendance at Barclays Center on Friday night for Game 6 of the NBA Playoffs between the Brooklyn Nets and Toronto Raptors. Both seated courtside at both ends of the scorers table, the rap heavyweights made their presence felt, cheering on their respective hometown teams.

Wearing a special edition OVO varsity jacket, Drake’s appearance triggered the Nets arena team to poke fun at him during a timeout in which they placed an image of a Nets jersey over him. A few seats down, Jay and wife Beyoncé were all smiles, as cameras caught the couple indulging in candy. Currently being played right now, the game can be seen on ESPN 2 as the Raptors lead the series 3-2.

Continue after the jump….. 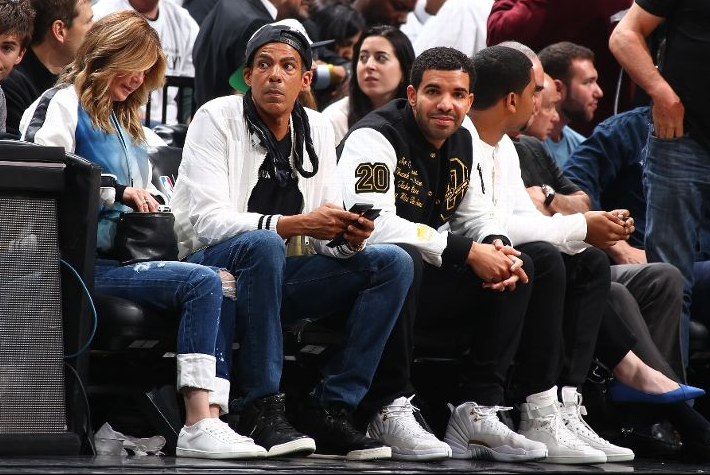 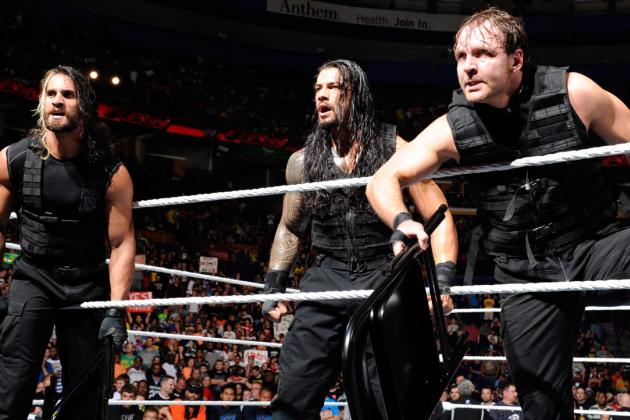 The Shield is on a collision course with the newly reunited Evolution at WWE Extreme Rules. The match is a result of heat that began between the two teams several weeks ago on Monday Night Raw, and it all comes to a head on Sunday, May 4.

And while The Shield has conquered nearly every combination placed before them, the fact is that Evolution is not the typical six-man tag team. Facing Triple H and company will cement The Shield's legacy in WWE.

From the moment that The Hounds of Justice debuted on the main roster back in 2012, fans knew they were something special. The talents and abilities of Dean Ambrose, Seth Rollins and Roman Reigns became apparent very quickly, as they blazed an impressive path of destruction through the company.

The Shield was the real deal, and everyone knew it. 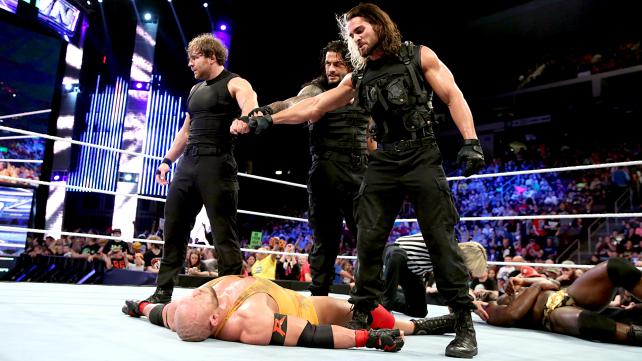 The spotlight The Shield was given was unprecedented. Not since The Nexus had a unit been given as much freedom to perform and as much opportunity to shine. But unlike its predecessors, The Shield was not concerned with running the show.

They merely wanted to be the best in the ring.

And for many fans, that is exactly what they became. Their initial gang warfare tactics morphed into a very cohesive, very fluid routine that saw The Shield elevate in WWE. They were respected for their work in the ring and for the way they fully embraced their gimmick.

The Shield was young and hungry, and at times it seemed as though they just wanted it more than anyone else did. Together, they had the makings of what could very well be the most dominant faction pro wrestling fans have ever seen.

It was that dominance and the dedication to their craft that guaranteed The Shield's place in WWE history. But it's their upcoming match with Evolution that will do more for their legacy than anything they have done so far.

Triple H is one of the most legendary Superstars in WWE history. He is a 13-time WWE and world champion, a man who has worked main event matches all over the world. He is the co-founder of the wildly successful Degeneration-X, and he is a household name in the professional wrestling industry.

He is one of the biggest stars Vince McMahon's company has ever known, and he will go down as one of the most iconic figures in WWE history.

Anyone who steps into the ring against him now, especially considering The Game no longer needs to wrestle for a living, should not take the moment lightly. Triple H does not get into the ring to further his career anymore; he only does it if it's good for business.

And giving The Shield time to shine at Extreme Rules is definitely good for business.

Triple H is, of course, not alone on May 4. Joining him are Randy Orton and Batista, and between them, they have a total of 31 World and WWE Championships. They also happen to be three-fourths of Evolution, WWE's version of The Four Horsemen.

Evolution was everything The Horsemen would have been had they been born in WWE. They were slick, stylish and very capable in the ring, much like the original group.

But they also had Vince McMahon's marketing machine behind them to instantly propel them to the top of the company. 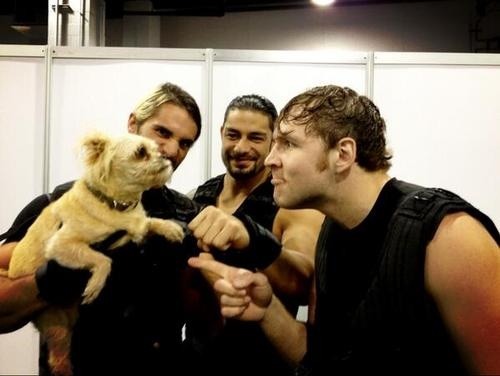 Having Ric Flair as the fourth member only helped their cause.

And now that Triple H, Orton and Batista are once again running together, the past is meeting the future. The match at Extreme Rules represents the evolution from Triple H's group to The Hounds of Justice.

Again, Triple H does not need to wrestle. And considering the history Evolution has in the company as a unit and as individual Superstars, the fact that they will be facing The Shield is likely a huge statement by WWE.

This match is less about Evolution's reunion and more about The Shield's legacy.

When The Shield worked other teams, it was different. Mismatched Superstars were usually thrown together to combat The Shield in an effort to get revenge for previous attacks.

John Cena, Ryback, Sheamus and Big Show each stepped up in various six-man combinations to face The Hounds of Justice.

And when The Shield emerged victorious in those matches, it represented some nice wins for them.

But facing three of WWE's biggest stars and one of its biggest factions of all time is on a whole new level. For perhaps the first time since its inception, The Shield is facing its one true test of main event superstardom.

Evolution may not be in its prime, but it could be the toughest and most important challenge WWE could ever put in front of Seth, Roman and Dean.

And win or lose, The Shield's legacy will be cemented. If they win, it's a moment that will never be forgotten. And if they lose, they will almost certainly come back better than ever for a rematch. Either way, The Shield is in the right place at the right time.

And its legacy will be better because of it. 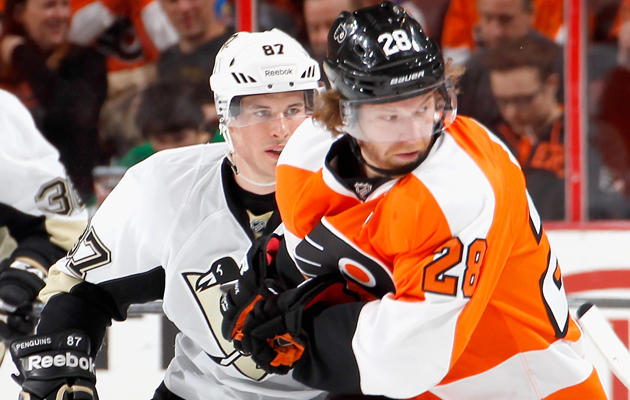 The NHL unveiled the top three vote-getters for the Hart Trophy on Thursday, the award given to the NHL's Most Valuable Player.

The finalists are Sidney Crosby of the Pittsburgh Penguins, Ryan Getzlaf of the Anaheim Ducks and Claude Giroux of the Philadelphia Flyers.

Crosby is a heavy favorite to win the second Hart Trophy of his career after another terrific season for the Penguins. He had 36 goals and a league-high 68 assists this season to run away with the Art Ross Trophy as the league's leading scorer. And, for the first time in what has felt like an eternity, Crosby was healthy all season long, playing in 80 games for the Penguins. In 30 of those games he had more than one point. Just as important to his candidacy is that he remained healthy this season while the players in Pittsburgh around him did not. He was doing a lot of the work for a Penguins team that ran away with their division as the Pens led the league in man games lost to injury.

Getzlaf was pretty much another lock to be a finalist. The Ducks captain had a terrific season as the Ducks went on to win a second straight Pacific Division/Conference title. With a career-high 31 goals, he was the closest to Crosby in the points race, finishing with 87 on the season. At one point this season he went 14 straight games with a point, the longest such streak in the NHL since 2011-12. He and Corey Perry worked together to produce more than the lion's share of the offense for Anaheim. Not to mention Getzlaf plays in all situations for the Ducks, killing penalties as well as on the power play and even strength. This is Getzlaf's first time as a finalist for the Hart.

Giroux, like his Flyers, had a very slow start to the season as he nor the team could score. The Flyers captain declared the team was going to make the playoffs after a 1-7-0 start and he made sure they did. Giroux took off, matching his career high with 28 goals and finishing one point behind Getzlaf for second in the NHL with 86 points. Not bad for a guy who didn't score a goal until his 16th game of the season and was left off Team Canada because of his slow start. In a sign indicative of his value, as Giroux went, so went the Flyers it seemed throughout the season. This is also the first time as a Hart finalist for Giroux.

The Hart Trophy will be handed out along with the rest of the awards at the NHL Awards Show on June 24th in Las Vegas. Alex Ovechkin won the award last season. 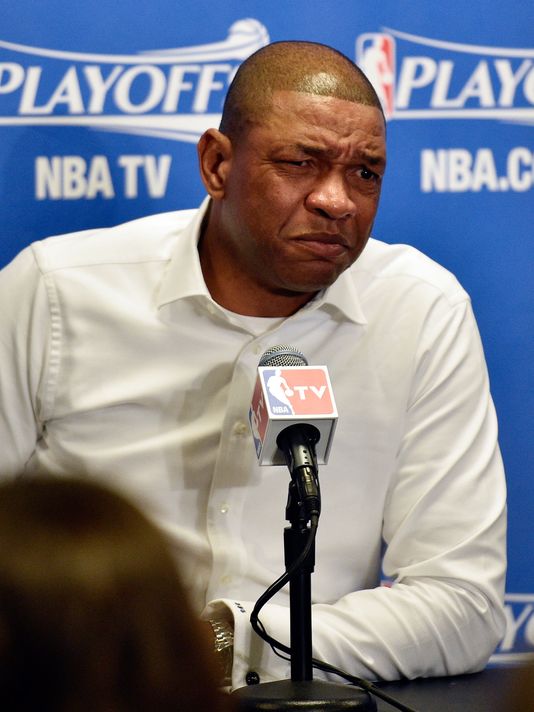 LOS ANGELES (AP) — Clippers coach Doc Rivers says employees on the team's business side considered not working for the franchise after owner Donald Sterling's racist comments were exposed a week ago.

Rivers met with team employees who were still upset and angry Friday, several days after Sterling was banned for life from the NBA.

STERLING: His first comments in aftermath

Rivers says he made the trip downtown at the request of other top executives with the Clippers, who will play the Golden State Warriors in Game 7 of their first-round playoff series Saturday night.

Rivers spent Friday morning at the Clippers' team offices, listening to employees in ticket sales, marketing and other departments.

The coach says it was "really hard" to see the pain in the employees who took the brunt of public backlash against the Clippers.


It's a theme flight to Denver. TC asked the team to wear their favorite #NBA team's gear. See your favorite Mets team pic.twitter.com/hKpKUtxnNR