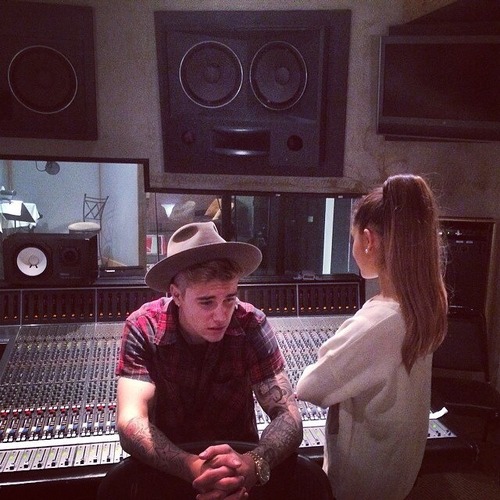 By Kathleen Perricone
Ariana Grande had a big Thursday night at the iHeartRadio Music Awards … and this morning, Ryan announced that she has just been added to Wango Tango.
The “Problem” singer called in to On Air with Ryan Seacrest to chat about the big news, being starstruck by Jennifer Lopez at the iHeartRadio awards, and working with none other than Justin Bieber on her upcoming album.
Of course, Ryan had to ask about that photo her manager Scooter Braun posted on Instagram of Ariana and Justin together in the studio.
So does that mean they’re working on a song together?
“Yeah, I am,” she reveals. “I’m excited about it … I’m just very excited. Justin wrote it and he brought the idea to me. And I was really excited to hear it and I’m excited to work with him. I’ve  wanted to work with him for a while. And I know it’s something our fan have been begging for for years now.”
Will it be on her upcoming album or his? “I’m hoping it ends up on my album, which will be out late summer.”
Until then, download “Problem” on iTunes and for more information on Wango Tango, which is May 10 at the StubHub Center in Carson, California, go here.
source