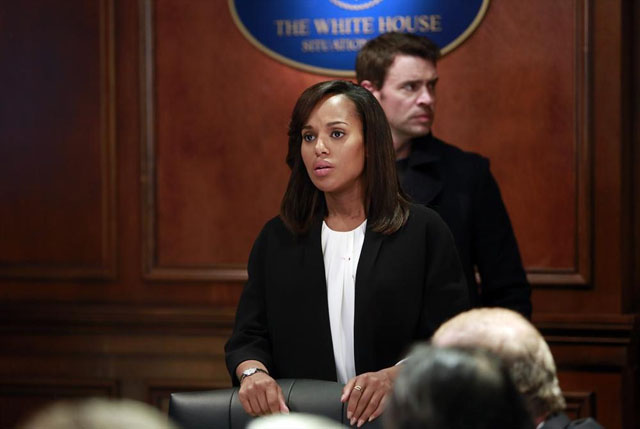 The Season 3 finale of Scandal had about as much hype as an episode can get. Kerry Washington said the episode got "crazier and crazier in the most wonderful way." Katie Lowes (aka Quinn) said the episode breaks every rule in TV.

But at least in terms of surprises, the episode lived up to the hype. Here's a rundown of how it happened:

1. Sally is the Hero of the Bomb Blast
The bomb we've spent weeks waiting for goes off in the first few minutes of the episode, and Cyrus' dream of Sally Langston being killed in the blast backfires completely. Jake bursts into the Oval Office and tells Fitz about the impending disaster, allowing officials to order an evacuation of the church just before the blast.
Fitz's national security team is gathered in the White House Situation Room when the bomb goes off. Sally is about to get in a car to leave when Leo comes up with a stroke of genius. Rather than taking off, Sally decides not only to stick around, but to tend to the wounded in front of the cameras.

2. Olivia Tells Fitz That Big Jerry Raped Mellie; Mellie Says Young Jerry Is Fitz's Son
The secret that has destroyed Fitz and Mellie's marriage suddenly comes into the light -- in a somewhat unlikely way. Fitz is professing his love to Olivia, telling her that once he loses the election, he'll marry her and move with her to Vermont, where they'll have two kids.
When Fitz says that Mellie has never loved him and is responsible for ruining their marriage, Olivia reluctantly tells him that she thinks Big Jerry raped Mellie. At first, Fitz says he thinks Mellie is lying. But when Olivia presses the issue, he realizes it's true.
Fitz walks in to talk to Mellie, who knows almost instantly that he knows. He kisses her gently on the forehead.
3. Young Jerry Collapses on Stage During Fitz's Speech and Later Dies
Fitz is giving a stump speech in front of a cheering crowd when Jerry's nose starts bleeding. Jerry then collapses on stage as blood comes gushing out of his chest. Mellie tries, at first unsuccessfully, to get Fitz's attention. Fitz finally realizes what's happening as Jerry hits the ground and grabs his chest.
It's the first scene Jerry is in after we've learned that he really is Fit'z son, and it turns out to be the last.
Olivia tells Cyrus that Fitz is going to win the election. She's ashamed that one of her first thoughts after Jerry's death was the election.
Olivia addresses the media to report that Jerry has died of bacterial meningitis. Fitz then learns that the meningitis has been traced to a strain that has gone missing. He suspects that Maya Pope, having failed to kill Fitz, has killed Jerry instead.
Fitz and Eli Pope talk in the hospital, with Fitz telling Eli he wants to kill Maya, and Eli assuring him he'll make it happen.
4. Olivia Says She's Quitting OPA; Maya is Apprehended; Eli Tells Fitz Maya is Dead
Olivia calls Eli and asks if his offer still stands for a plane and a new life. She then tells the Gladiators that she's leaving and that Eli will take care of them financially.
When she tells Jake what she's up to, she says she's making the move because she is the scandal she needs to clean up. Her mother has killed a teenage boy, and the lives of both her father and the man she loves (Fitz) are in disarray.
5. Eli -- not Maya -- Killed Jerry
In the last two minutes of the episode, the whole picture becomes crystal clear, and Eli Pope's stunningly brilliant long game is exposed.
Harrison points out to Eli that Maya killing Jerry didn't make sense. She's always been in it for the money, Harrison points out. But things have worked out awfully well for Eli. He's been reinstated as command. Maya is gone -- it turns out she's in B613 custody, in the infamous hole in the floor. Fitz is in the White House and in Eli's pocket. And Olivia's romance with Fitz is essentially over.
It's Harrison who puts all the pieces together for the audience. Eli acknowledges that he has, in fact, orchestrated Jerry's death and Olivia's departure. The Secret Service agent in B613's pocket infected Jerry with the deadly strain of meningitis, and has been working for Eli all along.
We then see that several B613 agents have been working for Eli the whole time.

In the last minute, Harrison gets Eli to confess that he orchestrated both Jerry's death and Olivia's ouster, and that he's been re-instated as command. We flash back to Eli's promise that since Fitz took one of his children, he'll take one of Fitz's.
As the episode nears its conclusion, we see Eli point a gun at Harrison's head as if to shoot. We see Huck follow through on advice from Olivia and greet his wife -- who he hasn't seen in more than a decade and who thinks he's dead -- at the door.
Back at the White House, Cyrus -- trying to appear somber but bursting with glee because of what has just happened -- tells Fitz that he has won Ohio and that, because of the electoral votes he's guaranteed in California, he's been re-elected.

A devastated Fitz, so crushed by Jerry's loss that he appears to hardly care about the election, turns and walks quietly back to the Oval. Once he gets there, he tries to pour himself a glass of Scotch, but struggles because his hands are shaking violently. He then drops to his knees in the middle of the blue carpet, right on the presidential seal.
Mellie joins him, consoling him, and tells him he has to address the nation. The last words we hear Fitz speak are: "Where's Olivia?"
Then it's back to the plane. Jake asks Olivia if she's sure she wants to go through with leaving. She says yes, and Season 3 ends with the plane taking off.
Read More @ the SOURCE


the Underwoods would be so proud of Eli