Nancy Grace's interview with Diamond Dallas Page, a veteran wrestler from Point Pleasant, about the death of The Ultimate Warrior, has wrestling fans crying foul. (YouTube) 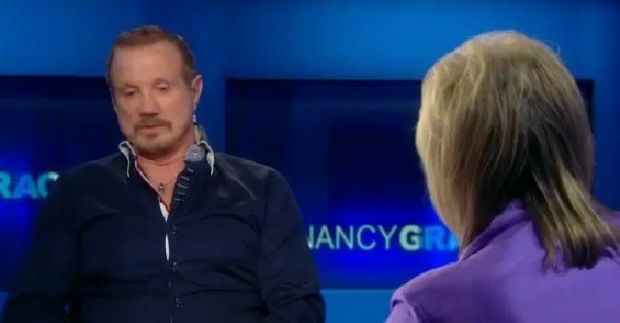 Outraged enough to get #CancelNancyGrace trending on Twitter today, some wrestling fans are none too happy with the HLN host.

Why? Last night Grace interviewed Diamond Dallas Page, a professional wrestler who hails from New Jersey, about the death of The Ultimate Warrior this week.

Page — born Page Joseph Falkinburg — is from Point Pleasant — presides over a yoga empire and now lives in Atlanta.

The Ultimate Warrior, born James Brian Hellwig, died suddenly on Tuesday at 54. Though his cause of death has not been determined, Grace, in talking about wrestlers who have died at a young age, seemed to target her questions specifically toward steroid use among wrestlers.

"He looked great but you don't always know what's going on on the inside," said Page, 58, having just seen the late wrestler at the WWE Hall of Fame induction ceremony, calling him "an intense cat" who was in great shape.

If he was in such great shape, why was he found dead, Grace asked.

"The last thing I am is a doctor, Nancy," Page answered.

"Whooooa," Grace bellowed. "Now we didn't all — I never used a steroid. I wouldn't know a steroid if it bit me in the neck."

"I went on Nancy Grace last night expecting to discuss Warrior the man," Page (@RealDDP) tweeted today. "Had I known the only topic discussed would be steroids I would not have participated," he said. "At the time I was also unaware of the list that was shown to the viewing audience."

Thank u for ur support. I went on last night to talk about good times..Didnt get to as I was in the HOTseat. Only RESPECT 4 @UltimateWarrior


He was referring to a list of wrestlers who died young that was displayed on screen as he and Grace talked. "To imply that all of the wrestlers on that list died from steroids was wrong and for that they owe the families an apology," Page continued. "Again, my only intention was to discuss Warrior the man and share some stories about how dedicated he was to the wrestling business. I am saddened that was not what happened and my thoughts remain with his family."

..."Mark Cuban/Skip Bayless" situation, and she would come-off as the ignorant sweathog she actually is

Why are folks surprised by @NancyGraceHLN ?? She got dumped by a pro-wrestler in the 80s' and started a life quest to be just awful...

...if she was remotely confident in her accusations, she'd interview an active talent, yet she won't do that because she'd have a...