Nicolas Cage's ARTPOP could mean anything.

While Nicolas Cage talks about his new movie Joe an art show in San Francisco celebrates all things Cage. 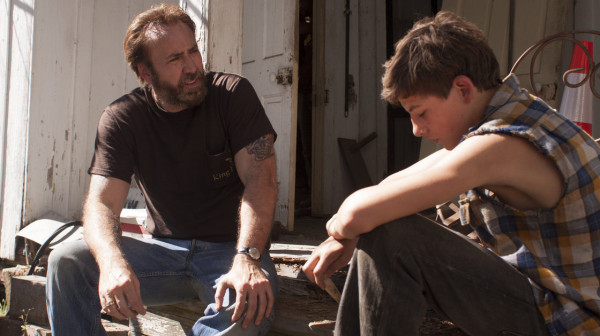 A new movie makes an unlikely hero out of a violent and reclusive man. Set in small-town Texas, Joe is about a hard-working, hard-living ex-con — played by Nicolas Cage — who's trying to stay out of trouble. He finds that the best way to do that is to not get involved with people — until he meets a teenage boy, played by Tye Sheridan, in need of help.

The movie is directed by David Gordon Green, who got his start with small films set in the tough, decaying American South. He transitioned to more Hollywood fare, like the stoner comedy Pineapple Express, but Joe feels like a return. Green has crafted a quietly powerful film that allows Nicolas Cage to lose himself in this character — no small thing for an actor famous for big, theatrical performances.

Cage and Gordon Green tell NPR's David Greene about the pull of the South, the film's use of amateur actors and finding a place for levity in difficult stories.

On what attracted Cage to this role

Cage: I had been waiting for the better part of a year to find a script where I could be as emotionally naked as possible. I'd done several movies where I was experimenting more with performance style and operatic kind of style, but now I wanted to go into almost like Dogme style of film performance, where I didn't have to think too much about it and I could just be, and take my memories or my past experiences and flood them into a character that would be the right vessel for it. So when I read Joe, right away there was an implicit connection with the dialogue where I thought, "Wow, I understand this man and I think I can play this part in a way where I wouldn't have to act."

On the appeal of the South

Green: It's a region of tall tales and sitting on the porch listening to my Grandad talk. Growing up in Texas, it's just been a region that really appealed to me, the textures and the voices. Every time I move someplace and they stop calling me darlin' at the diner, I have to turn around and go back home.

On the scene in which Cage's character tries to teach the teenager, Gary, how to make a "cool face"

Cage: This is a moment where you see Joe bonding with Gary and all the humor that that can bring in to a scene. This was me trying to find a place, over my entire career, to put my theories about the anatomy of a cool face, which I discovered by watching Marlboro Man commercials. 'Cause the guy in the Marlboro Man commercial, I would say to myself, 'Is that cool? Because you look like you're in pain, and yet you're smiling?' ...

You're smiling through the pain and therefore you're cool. ... But let me also reiterate that it's within the context of the character that it's cool. I don't really — Nicolas Cage doesn't really think that's cool. I think it's absurd, and that's what makes it funny.

Green: When we're dealing with a movie like this that has very difficult subject matter, a lot of dramatic elements to it, I find it very healthy to find the humanity of these characters and find moments of levity.

On the film's use of amateur actors like Gary Poulter, who played a violent alcoholic father and died after a night of drinking shortly after the film was made

Green: One of the things that's always really important to me is the authenticity of casting. Once we had Nic as the centerpiece of the film, we wanted to bring an unpredictable quality to the rest of the cast. Gary Poulter was a man that we met at a bus stop, just got talking to him about his story and we brought him back to read for the third lead in the film, and he just blew our minds. This is a man that hadn't been in front of the camera, and he'd been living on the streets for a while and was a street performer, and he was looking to turn over a new leaf in his life and use this as a creative outlet. It was just amazing working with this guy every day.

Cage: I was completely in awe of his charisma. And, by the way, I want to stress that he was totally on point when he was filming. He had all his dialogue; he showed up on time; he was 100 percent there. He reminded me of like a Civil War captain; he could have been in a great old Western movie. I said, "Just keep it together for a year, Gary, and I promise you your phone's gonna start ringing, your life is really gonna change." And he looked at me in this very vulnerable way, and he said, "Really?" And I said, "Yeah, man, really." So when David told me a couple months after photography that he passed on, I was pretty upset.

On what Cage hopes people take from this movie

Cage: I never want to impinge on your personal connection with a movie. There's a secret there, and whatever you get from it is what is right. But for me, [the film is] an ode to those people that we come across in life — those angels, if you will — that really embody what a father is. It could be a coach, it could be a science teacher, it could be a big brother, it could be a cop — you know, who take someone in and then they see that potential in the young person and they say, 'I'm going to celebrate that. I'm going to empower that.' I want people to go to the movie and think about those people in their own personal lives, that have been the — let's call it — the true father.

You can listen to the rest of the interview at the source.

Nicolas Cage Art Party: The Show So Bad It's Good

Centuries of human artistic expression — from cave paintings to Roman frescoes, from Rembrandt to Warhol — have led up to this.

By "this" we mean the Nicolas Cage Art Party, a celebration of Cage-themed artwork — some of it quite well done — that will pay homage to the delightfully dreadful actor much of the Internet loves to hate when not hating itself for loving him.

That's right: A Cage-themed art show, believed to be the world's first, is real and coming to San Francisco, Calif. Then it will mosey south for an encore in Los Angeles in July. More than a thousand people have already RSVP'd on Facebook to the San Francisco event, which starts at 7 p.m. on April 12 at a nightclub called Balançoire in the city's trendy Mission District.

Because, after all, doesn't a man who's capable of producing cinema like, well, this deserve such a fête?

The Nicolas Cage Art Party (alternately called the Nicolas Cage Art Show and Musical Shenanigans) is the brainchild of Ezra Croft. Croft is 35 years old, a Burning Man veteran, an avid cyclist and a Bay Area DJ who works at Bed Bath & Beyond to pay the bills. He was working an overnight shift at BB&B one night and looking at Reddit — where the One True God subreddit extolls the virtues of all things Cage — when the concept crept into his brain.

After conceptualizing the idea and seeing it through, Croft began putting up calls for submissions on Craigslist boards all over the world. Submissions have since poured in from points across globe — France, Nigeria and Japan, for example.

We should all be grateful for Croft's joke-not-joke though, because without it we wouldn't have pieces like this: 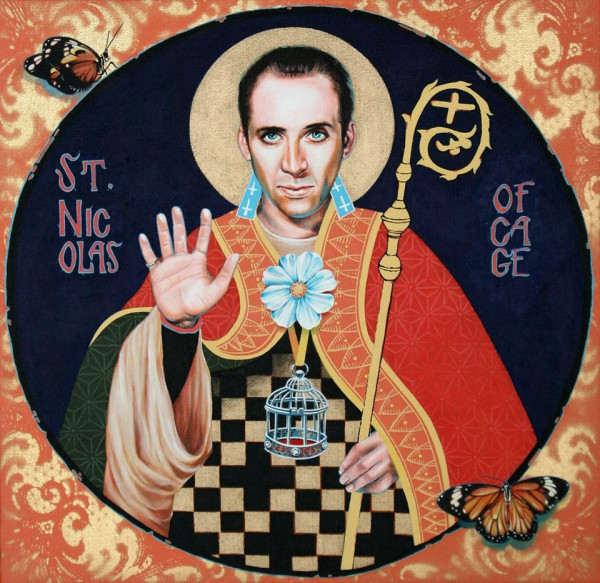 About 90 pieces in total, representing a vast range of styles, will be on display at Saturday's show, including this one depicting Cage as hero Cameron Poe in the timeless 1997 classic Con Air.

So why Cage? Croft says the Internet's strange obsession with him was the clincher — plus, he says, "the whole Grumpy Cat art thing kind of came and went."

But Croft also adds that there's something a little more serious behind the show — the idea of taking something as fatuous as an Internet meme and using it to inspire real art.

Some of the submissions have come from what Croft calls "insanely talented" artists. "Then you have the fact that it's Nicolas Cage," he says. "It's like cat videos directed by Martin Scorsese."

Scorsese may be a stretch, but Croft isn't lying about the talent some of these folks possess. To wit: 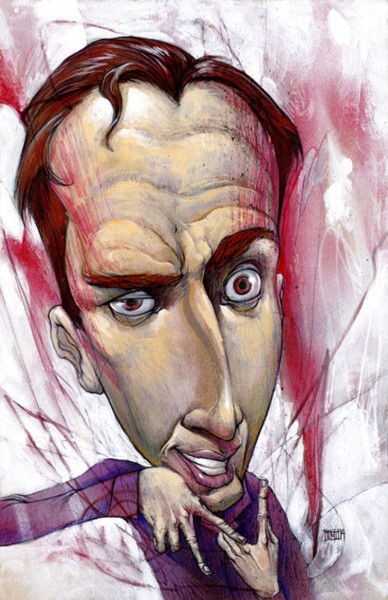 There will plenty more than just creepily well-done paintings of Nicolas Cage to titillate the senses on Saturday, too.

Croft promises a range of musical acts, including one that comes with an interpretive dancer named "Beany." Beany, it should be added, is a bearded man who weighs 300 pounds.

As the Cage festival picked up steam, Croft decided to expand it to L.A. in the summer. But something bigger — "even more grandiose," Croft says — is coming later this year: a Bill Murray-themed art exhibition that will make a four-city tour through San Francisco, L.A., Seattle and New York.

Why? "Because Bill Murray," Croft explains.

Well said. Until then, however, we'll all just have to settle for Cage. 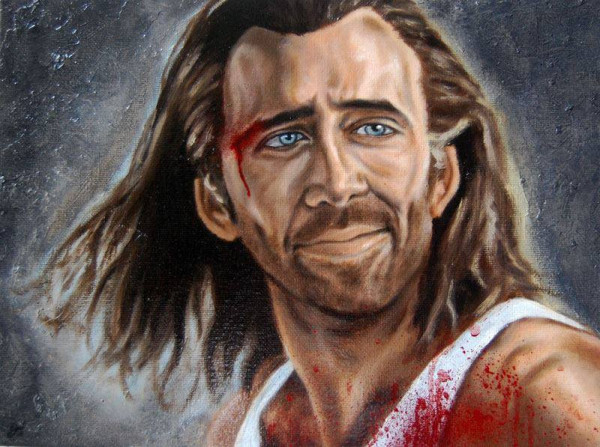 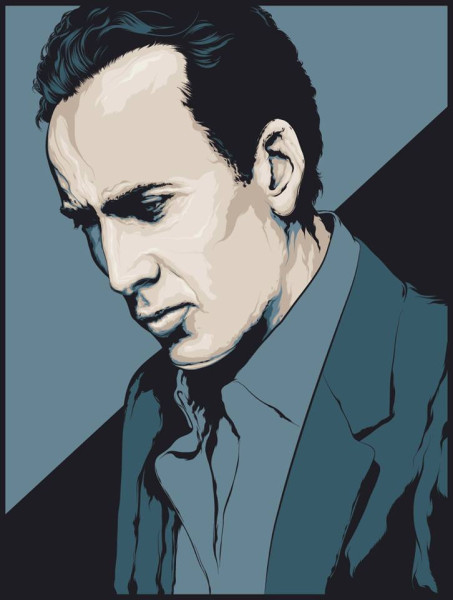 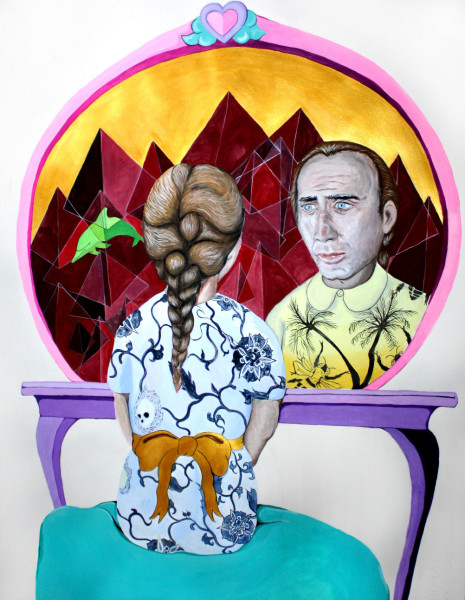 Time Magazine says that 'Joe Reminds Us That Nicolas Cage is a National Treasure'. It's never too late to repent and let him into your heart.