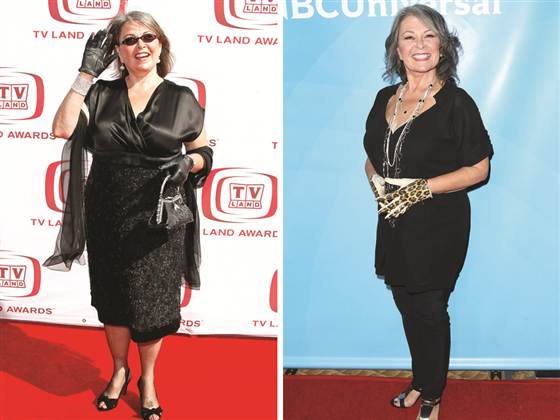 The 61-year-old former sitcom star showed off her much tinier frame while sitting on the panel for the series "Last Comic Standing." She wore a fitted black top with matching pants, silver heels and leopard gloves. She accessorized the chic look with several layered necklaces and wore sunglasses for most of the presentation.

Barr was whisked away after the event, but managed to chime in about her incredible new figure. "Crack!! I'm doing crack," she joked to Us Weekly on how she's lost the weight. "I'm just doing the things you're supposed to do...you know, moving more, and eating less."

Barr also thanked her supporters later that evening. "Hey, THANK YOU GUYS SO MUCH FOR ALL OF THE NICE WORDS ABOUT MY WEIGHT LOSS!" she gushed via Twitter. "I'm inspired 2 keep going!"

The star has publicly struggled with her weight since starring in her smash comedy "Roseanne" from 1988 to 1997. Her ex-husband Tom Arnold, whom she divorced in 1994 after four years of marriage, showed off his own 100-pound weight loss last month.

She looks good. I can't say the same about Lisa Lampenlli.