Courtney Love interview: 'There will be no jazz hands on Smells Like Teen Spirit'

On the 20th anniversary of Kurt Cobain's death, his widow Courtney Love talks to Neil McCormick about protecting Nirvana's legacy, reconciling with her daughter and making the best music of her life 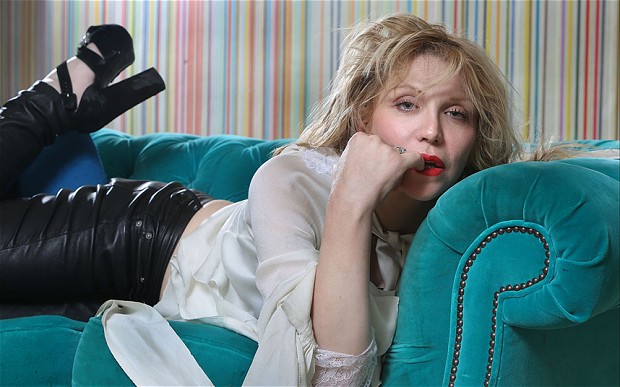 Courtney Love glances at a news feed on her phone. “Nirvana to reunite with Courtney Love as singer,” she reads aloud. “Yeah, that’ll be the day,” she snorts. “It’s just nonsense.” Speculative stories are bubbling around Love as we reach the 20th anniversary of Cobain’s death on April 5th, 1994. “It’s hard for me, but I think it’s much harder for Frances,” she says of their 21-year-old daughter, Frances Bean Cobain. “She has no memories of her father. Not one. So that sucks.”

When her late husband’s seminal grunge band are inducted in the Rock and Roll Hall of Fame in New York, on Thursday, April 10th, mother and daughter will collect the award on Cobain’s behalf, alongside surviving band members Dave Grohl and Krist Novoslevic. “I wasn’t in Nirvana, but it’s what widows and kids do. And it does give me ownership of the mythology, rather than just handing over to Krist and Dave their ownership.” 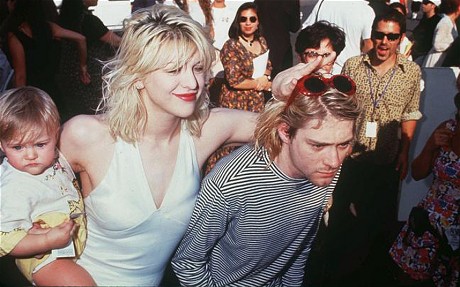 It is a strong statement. Love and Grohl have had public disputes over the legacy of Nirvana, and while she expresses some unease at things that “exacerbate the myth of Kurt and Courtney”, she strongly feels that this is her story as much as anyone’s. She pours scorn on a permanent Nirvana exhibition set up by Grohl and Novoslevic (with Microsoft founder Paul Allen) at the EMP Museum in Seattle. “It makes them look like happy Monkees. Which isn’t the reality at all.”
Yet Love has come under criticism from some quarters after revealing that she is developing a Broadway musical about Cobain, not a genre most fans would associate with his punk sensibility. “It’s more a play, conceived by a brilliant team. I can’t name names, but when you hear who is possibly involved, it takes on a new dimension. Otherwise it’s Vegas rubbish, and I will never allow it. There will be no jazz hands on Smells Like Teen Spirit!”

Love knows she is viewed by some with the same kind of suspicion and antipathy that Yoko Ono has attracted from many Beatles fans. “I don’t think the Yoko comparison is fair, I never sat in on rehearsals,” she protests. “But Kurt thought Yoko was cool. He was an early adopter. He gave me a Yoko Ono box set when I was pregnant. Which I threw at his head. I wasn’t really a fan.”

Love is paying a flying visit to London this month to promote a solo British tour in May, and a forthcoming single, Wedding Day, her first new music in four years. “I’m not prolific but I think I’m prodigious. It’s magical, my best for an ice age, a two minute 59 second slab of punk-pop greatness. I’ve thrown out twenty riffs looking for this. I’m bloody proud of it.” Love believes, and she may well be right, that because of her outspoken and often inflammatory public persona, that the music she creates has to be bold, fearless and of the highest possible standard, or she will be ripped to shreds by critics. “I can’t just do a really good rock record and that’s the end of it. I can’t be Nickelback. And not to be a b****, I can’t be the Foo Fighters.”

It is a typically back-handed swipe at Grohl’s post-Nirvana ensemble, a little verbal hand grenade innocently tossed out as if she doesn’t know the damage it might cause. “America’s Sweetheart was my one true piece of s***, it has no cohesive thread, I just hate it,” she says of her 2004 solo album, made under the influence of drugs, as Love admits. Everything else she has recorded, solo or with her band Hole, she says, “I can stand behind it 100 per cent. And if you don’t like it, you’re the idiot.”

Love is a compelling, beguiling character, combining a motormouth brashness with a surprising sweetness, almost bordering on naivety. At 49, she has a distinctively wonky glamour, crossing rock sleaze and Hollywood elegance, leather trousers and flowing tops – a spaced out Botox beauty beneath a shock of dyed-blonde hair. She is open and loud, energetically jumping from one subject to another, assuming her listener’s intimate acquaintance with all the characters and events in her chaotic life. It is difficult to really convey Love in full flight but she’s fun to be around because she is smart and friendly and says what she thinks with an honesty that, you can imagine, might be quite difficult for those closest to her.

She recently rejected her own ghostwritten autobiography, sending it back to Harper Collins because, she says, “it’s like me jacked on coffee and sugar in a really bad mood. I said keep your bloody money. I’d rather keep my friends.”

She complains she has already been in trouble this week for implying there would be a reunion of the classic line-up of her original band Hole next year. “We may have made out but there is no talk of marriage,” she says of tentative meetings with former band mates. “It’s very frail, nothing might happen, and now the band are all flipping out with me.” There are things that she would like to be known, including that she has been drug free for a decade. “That bad cocaine thing was only a year, but it was not a discreet year, with the photos to prove it. I haven’t done a toot since then.” She says she is “very appropriate on social media now”, after various controversies and law suits. “I’ve learnt my lesson. After I get a spanking, or maybe three, I tend to be good.”

She has been reunited with her daughter, following a very public estrangement, which Love blames on the influence of greedy lawyers. “It was a really dark public humiliation. My own kid. Not fun. But without getting into her personal life, which she’s very private about, she saw people being dishonest and craven, and she eventually came back and said I need my mom. She inherited my big mouth and her dad’s temperament. She’s not someone who should be in the public eye, at this point. I’m glad she didn’t do all the kind of things she was offered because of her beauty and provenance, like to be in Twilight at 15. What she really needs, at this point in her life, is the next level of education.” Love sounds like any concerned mother as she longingly murmurs, “Oxbridge!”

In a way, it’s a disservice to Love to constantly contextualise her with Nirvana, and the soap opera of her life as a rock widow. “It was twenty years ago,” she says, thoughtfully. “I’ve had great loves since Kurt. I probably should have married again. But I couldn’t put my tiara and my little slip dress in a box and go and be Mrs Somebody who used to be Courtney Love.”

As the leader of Hole, she has been a compelling rock star in her own right, a loud, confident, abrasive woman at time when there were relatively few female rock icons, the driving personality on two of the outstanding rock albums of the Nineties, Live Through This and Celebrity Skin. She has been an award-winning actress with fine performances in movies like The People V Larry Flynt (1996) and Man In The Moon (1999). Her 2010 album (with a new line up of Hole), Nobody’s Daughter was powerful and at times spine-tinglingly intense. She admits the record’s poor sales hurt her. “The bitterness of failure doesn’t taste very good. It took me a long time to recover. I went to New York and lived like a socialite, dated a lot of people who didn’t have tattoos, went to film and art openings, until I bored myself silly. Until I had to rock. Four to the floor rock and roll is where I’m stuck. I need guitars in my life.”

I ask her whether she still looks back on her time with Kurt with fondness. “It was bad,” she says, after a long pause, blinking tears. “It wasn’t very fun. It should have been fun. But I can barely remember it because people didn’t take care of us.” She dabs at her eyes. “You’ve made me weep. But that’s OK. It was a long time ago.”
SOURCE
Tags: courtney love, dave grohl / foo fighters / nirvana
Subscribe
Previous
← Ctrl ← Alt
Next
Ctrl → Alt →
Previous
← Ctrl ← Alt
Next
Ctrl → Alt →