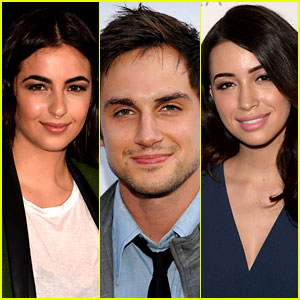 Fresh off its bloody and deadly season finale, AMC's The Walking Dead has promoted three for its fifth run.


Masterson (sister of both Danny and Christopher Masterson) made her debut on the drama from showrunner Scott M. Gimple in November, playing Tara, one of the women The Governor  encounters after the fall of Woodbury. She has become loyal to Glenn  after she lost her family and watched as The Governor executed Hershel. (The show's Tara is not to be confused with the comics character of the same name.)

Serratos, meanwhile, plays Rosita, an iconic character from the comics created by series executive producer Robert Kirkman. She made her debut in the second half of season four in November as a member of Abraham's Army supporting his mission to bring Eugene to Washington, D.C. She signed on to Walking Dead in September with a recurring role and option to be a regular in season five.

For his part, West made his debut during Sunday's season-four finale as Gareth, the head of the group living at Terminus -- the so-called "sanctuary for all" -- who may or may not be overseeing a group of cannibals. THR exclusively reported that the Greek alum signed on to the series in November with an option to be a regular in season five and that the character would have a big presence and play an important character on the series.

"Seeing Gareth and Rick and the people of Terminus and our survivors go head-to-head is going to be interesting," exec producer/comics creator Robert Kirkman told THR. "There is a very deep, dark and storied history to Terminus and how these people came to be that will be revealed in season five."

Masterson is repped by LB Talent Agency, Masterson Management and Abrams Artists. Serratos (Twilight) is with Global Artists Agency, Thruline and Stone Meyer. West is with ICM Partners and John Pierce at The Group.

Their promotions comes nearly a year after The Walking Dead promoted Chad L. Coleman, Sonequa Martin-Green and Emily Kinney to regulars for season four. This season, the series also added Cudlitz and McDermitt as well as Lawrence Gilliard Jr.  as regulars.

source
none of this guarantees safety. who do you think is getting eaten?