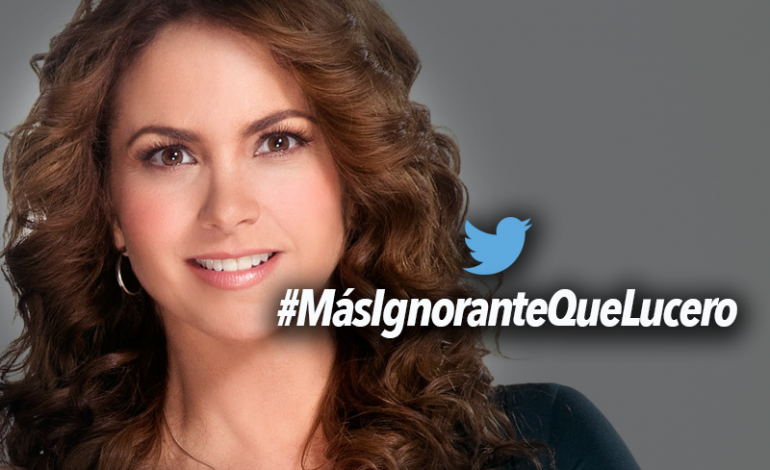 It has not been a good year for Lucero on social networks and her latest goof was alerting the citizens of Bolivia of a possible tsunami, when this country doesn't have a coast.
Lucero has been the subject of cyber-bullying since the beginning of the year and her infamous hunting photos scandal. Her latest goof came when news broke of an 8.2 earthquake that rocked Chile and a tsunami warning was issued for the coastal countries. "Chile, Perú, Ecuador and Bolivia, wishing that this probable tsunami goes away and nothing major happens. Praying constantly and positive decrees," the 44-year-old singer wrote on Twitter. Following this message the public outcry didn't await and a hashtag was created in her honor, "Más Ignorante Que Lucero" ("More Ignorant Than Lucero"). "It's simply that a tsunami alert was made for Bolivia as well. I would imagine that the winds could be dangerous," she replied when a follower pointed out that Bolivia doesn't have a coastline.

When another user corrected her that it would be difficult for Bolivia to have a tsunami warning Lucero tweeted, "I'm only making reference to the alerts from the newscasts." She followed up with a clarification, "When I mentioned Bolivia in the tsunami alert, it was because I heard it on the most important newscast in Mexico. I apologize if it was an error. I take back the tsunami idea ... I know about geography, but I am no expert in natural disasters. I just thought about the people, the damage ... Anyways ... My only wish is for health and well-beign for the countries in alert (tsunami's and earthquakes) and the whole world." The "Soy Tu Dueña" star continued retweeting messages that defended her error and her well wishes. She concluded tweeting, "the haters (professionals in bitterness) now have a topic for about a month... or more! No big deal, let's smile and be happy!"
Earlier this year, Lucero was forced to cancel an appearance at the Viña Del Mar 2014 Music Festival following her photo scandal. "In the name of the Viña del Mar International Music Festival, we would like to inform you that the singer and actress Lucero has decided to cancel her participation in the next edition of the competition," read the statement released by Chilevisión. "The reason for this decision has not been exposed by the singer's manager, Ernesto Fernández. The reason is the media uproar originated by the publishing of photos from the artist's personal life that have put at risk her security and public image." The photos released by the Mexican tabloid magazine show the "No Pudiste Amar Así" singer hunting animals in the wild with her millionaire boyfriend, Michel Kuri. Social media has been abuzz around the scandal ever since the pictures became public and has users blasting the actress for her actions against animals.

Another earthquake/aftershock (7.8) half an hour ago in the north of Chile...