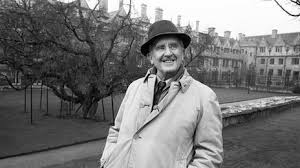 Hwæt! Almost 90 years after JRR Tolkien translated the 11th-century poem Beowulf, The Lord of the Rings author's version of the epic story is to be published for the first time in an edition which his son Christopher Tolkien says sees his father "enter[ing] into the imagined past" of the heroes.

Telling of how the Geatish prince Beowulf comes to the aid of Danish king Hroðgar, slaying the monster Grendel and his mother before - spoiler alert - being mortally wounded by a dragon years later, Beowulf is is the longest epic poem in Old English, and is dated to the early 11th century. It survives in a single manuscript, housed at the British Library, and has inspired countless retellings of the myth - recently and famously by the late Seamus Heaney, whose translation won him the Whitbread book of year award in 1999.
Tolkien himself called the story "laden with history, leading back into the dark heathen ages beyond the memory of song, but not beyond the reach of imagination", saying that "the whole thing is sombre, tragic, sinister, curiously real".
Although the author completed his own translation in 1926, he "seems never to have considered its publication", said Christopher Tolkien today, announcing the Tolkien estate's new deal with HarperCollins to publish Beowulf: A Translation and Commentary on 22 May. The book, edited by Christopher Tolkien, will also include the series of lectures Tolkien gave at Oxford about the poem in the 1930s, as well as the author's "marvellous tale", Sellic Spell.
Tolkien's "creative attention to detail" in his lectures gives rise to a sense of the immediacy and clarity of his vision", said his son. "It is as if he entered into the imagined past: standing beside Beowulf and his men shaking out their mail-shirts as they beached their ship on the coast of Denmark, listening to the rising anger of Beowulf at the taunting of Unferth, or looking up in amazement at Grendel's terrible hand set under the roof of Heorot."
Tolkien also closely considers the dragon which would slay Beowulf, writing of how the beast was "snuffling in baffled rage and injured greed when he discovers the theft of the cup" – an image reminiscent of his own thief Bilbo Baggins, sneaking into the lair of the dragon Smaug in The Hobbit – but, said his son, the author "rebuts the notion that this is 'a mere treasure story … just another dragon tale'".
"He turns to the lines that tell of the burying of the golden things long ago, and observes that it is 'the feeling for the treasure itself, this sad history' that raises it to another level," said Christopher Tolkien.
JRR Tolkien died in 1973, having seen The Hobbit and The Lord of the Rings achieve success, and leaving behind him a swath of previously unpublished works. Several have been released over the last few years, including his poem The Fall of Arthur, set in the last days of Arthur's reign and inspired by Geoffrey of Monmouth and Thomas Malory, The Legend of Sigurd and Gudrún in 2009 and his unfinished Middle-Earth story The Children of Húrin in 2007.
John Garth, author of Tolkien and the Great War, said the epic Anglo-Saxon poem Beowulf had "a deep and detailed impact on what Tolkien wrote – from his earliest poem of Middle-earth, written in September 1914, right through The Hobbit with the theft of a cup from a dragon hoard, and The Lord of the Rings with the arrival at the halls of Rohan".
The author also, said Garth, changed attitudes to Beowulf "completely in a 1936 talk which rescued this marvellous poem from being treated as a mere quarry for historical enquiry".
"It's been known for many years that Tolkien had translated the poem, and there were rumours back in 2004 that this work would be published imminently. This is long-awaited, and hugely exciting for Tolkien readers," said Garth.
The poet Simon Armitage, who hit the bestseller lists with his own translation of the Middle English epic poem Sir Gawain and the Green Knight, called Tolkien's Beowulf a "tantalising prospect", adding that the author's translation of Sir Gawain "is a master class in linguistic chicanery – some sections of it read as older than the original! Middle English meets Middle Earth".
"As a Prof of Old English, Beowulf would have always been in his mind and in his sights," said Armitage. "The fact that his Beowulf has slept dusty and unpublished for so long makes me wonder if he felt confident about publishing it at all. But given the current taste for his work and the film versions of his books, it will be interesting to see if it gives Heaney's Beowulf a run for its money, which was a huge bestseller on both sides of the Atlantic and seems to be regarded at the moment as the definitive contemporary version. I can already see it in Waterstones - the leather-bound, illustrated gift edition, filed next to The Hobbit and the boxed DVD Game of Thrones."
Beowulf opens "Hwæt w GrDena in gar-dagum / Þod-cyninga þrym gefrnon, / H p æþelingas ellen fremedon", lines which were translated by Heaney as " So. The Spear-Danes in days gone by / and the kings who ruled them had courage and greatness. / We have heard of those princes' heroic campaigns."
The opening, Hwæt, has long foxed scholars, with translations ranging from Heaney's "so" to "lo", "hark", "behold", "attend" and "listen". HarperCollins would not comment on how Tolkien approached Beowulf's famous opening, but all will be revealed come May.

256 DAYS UNTIL THERE AND BACK AGAIN!!
(mods sorry for editing i had the countdown wrong i put in minutes instead of days)