The star of The Winter Soldier is happy to be a cog in the machine, as long as that machine isn't a pasta restaurant 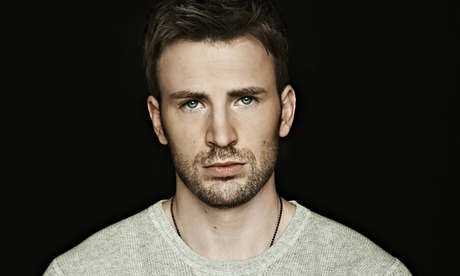 Chris Evans does not take umbrage when I tell him he has movie-star anonymity. By which I mean, he may be a leading man in a superhero franchise that generates vast mountain ranges of cash, but whatever innate charisma is beloved by the camera seems less obvious in person, where he comes across as a regular, affable guy – albeit one who spends an inordinate amount of time in the gym. "Good," he says. "That's the goal. You want to strike that happy medium: the balance of being able to find creative satisfaction in your profession, be able to afford a roof over your head but still have the freedom to live a relatively normal life." But when the prospect of playing Captain America in Marvel's huge interlocking movie universe became a possibility, Evans, 32, had qualms. "There was big apprehension on my part whether or not to do the movie. It was a six-picture deal and the problem is, if one of these pictures is a big success and it changes your life, you may not cope with it as well as you expected. There certainly was some fear involved initially. But then you just think, 'If that's what I'm scared of, maybe that's exactly what I should do', and, in retrospect, God, I'd be kicking myself if I hadn't done it."

Although Boston-born Evans has played Captain America in both the character's own film (retitled The First Avenger in some territories) and The Avengers (confusingly, called Avengers Assemble in the UK), as well having a cameo in Thor: The Dark World, there was a sense that the earnest unfrozen super-soldier was portrayed as the butt of the joke. All that changes with Captain America: The Winter Solider. This is the most perfectly executed and purely entertaining Marvel production since the first Iron Man. A big chunk of credit goes to the movie's sibling director team, Joe and Anthony Russo, who seem like they've compiled a list of all the genres they ever wanted to tackle – conspiracy, martial arts, political thriller, buddy movie – and thrown them into one film. But Evans is up to every challenge hurled at him. Shrugging off the burden of being the confused do-gooder of the previous films, he trades blows with real-life UFC killing machine George St-Pierre in a bone-crunchingly convincing fight. He goes toe-to-toe with Robert Redford who – no spoilers, obviously – may have something to do with SHIELD becoming a little too overzealous in the methods they employ to protect the world. And he trades barbs and disapproving glares with Scarlett Johansson's Black Widow, who you will want to see in her own movie after this.

Marvel's sense of continuity, and the way each movie acts as a building block to set up the next, is a model that is becoming both an inspiration and a headache to rival studios with similar ambitions. But that sort of success is not easily mimicked. It the takes patience to establish a distinct series of franchises that can ultimately commingle. It takes the pragmatism to abort a character that isn't working: Mark Ruffalo was the third attempt at getting The Hulk right. And it takes time to establish a unifying tone. Marvel specialises in high-stakes action movies that are grounded in a recognisable reality; they're jokey but never camp. The entity most desperate to emulate that blueprint is long-time comic-book rival DC, which is reportedly trying to jump-start a Justice League movie by cramming loads of familiar faces into Superman Vs Batman. Which is to say, it's doing the exact opposite of what Marvel did. I invite Evans to mock this doomed effort. He laughs but chooses the diplomatic route. "Obviously, it's an easy parallel to draw. It's not that I'm glad to see a movie not succeed. I'm just honoured when ours do."

So what's it like working for Marvel? Is the company more than just another bunch of executive overlords? "Oh, it's a cool corporation," he says, eagerly. "It's got the Midas touch. It would be one thing if they were kicking out crap but they're just consistently making good movies that are consistent successes. And they're people who really care about movies. I saw this great documentary about indie movies and they made this analogy to restaurants. You want to eat at a restaurant where the people who own it really enjoy good food, where they're not just doing it for the money. You don't want to go to the [US restaurant chain] Olive Garden where the model is low cost/high income. Marvel, even though they're these massive movies that should just be a money-making machine pumping out product, at their heart they're comic-book fans."

I bring up the blockbuster di tutti blockbusters, The Avengers, the billion-dollar-grossing amalgamation of all the previous movies. What kind of ego adjustment does an actor have to make when he transitions from his own vehicle to a set full of superheroes? "It's so nice," he says, sighing almost wistfully. "I love getting to be in The Avengers. You just breathe a little bit. It's not all about you. It's so nice to have other people bearing the burden of responsibility." There's no fighting over who gets the cool entrances or the big action set-pieces or the most hilarious one-liners? Evans regards with me derision. "That's not coming from me. Anyone who knows me knows I'm perfectly happy with less is more. Whatever you want me to do. I'm happy to be here. I'm not trying to steal the show. I tend to shy away from – I don't want to say the spotlight – how about responsibility? It's just very daunting. These movies are very intimidating. Captain America. This is the stuff I struggle with."

Months before The Winter Soldier's release, a third movie, also directed by the Russos, was announced. That means Evans will have played Captain America in three of his own movies plus two Avengers films. He has also played the Human Torch in two Fantastic Four films and his filmography includes Edgar Wright's Scott Pilgrim Vs The World and The Losers, both graphic-novel adaptations, as well as the teens-with-mutant-powers film Push. That's a lot of comic-book roles for one career. Is that by design or just what's out there? "I think it's more the latter. There just happens to be a big influx of comic-book movies, but the truth is, it's much like making a movie based on a book. There's great stories, there's developed characters, there's structured arcs, there's a built-in audience. It makes sense that a studio would want to make films out of those pieces of work. It just worked out coincidentally that I was in a string of them."

Does he foresee the onset of superhero fatigue? "Possibly. But I would also say that a lot of people who see superhero movies for the first time don't have much prior knowledge of the characters. So in a lot of ways, if a superhero movie is done well, it's not just about the fact that they have powers. There's a human element there as well. There's a connection to the character. You liked the first Iron Man movie not just because Tony Stark flies around; you like Tony Stark. You might as well ask me whether there's going to be movie fatigue."

Before the interview ends, I am unable to stop myself asking Chris Evans if he is aware of the British Chris Evans. He struggles for a moment before coming up with, "He's… a talkshow guy?" You're the better Chris Evans, I reassure him. He shrugs in bemusement at what is, to him, a meaningless compliment. So here's a better one: with Captain America: The Winter Soldier, Chris Evans has just vaulted to the top of the superhero food chain.