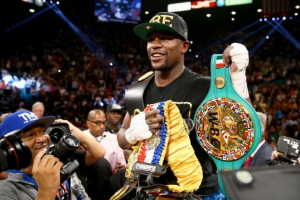 Floyd Mayweather Jr., 37, is now a suspect in the brutal beating and kidnapping of two of his former employee’s, reports TMZ. The veteran boxer was reported to have tracked down his stolen merchandise to the two men who have brought the allegations against him.

Sources close to the boxer revealed that the two men had been hired to work on Floyd’s Vegas homes, but when jewelry went missing Floyd pointed the finger at them.

The men claim that they were contacted several weeks ago and instructed to meet up with Floyd at an undisclosed location.

Upon arrival, they claim Floyd was waiting for them with a number of his “people.” The men claim that Floyd’s “people” proceeded to beat them with various weapons.

The attack was so brutal that the men could have easily died. Both men had broken arms and legs, and were hospitalized for several days, reports TMZ.

The men are adamant they never took anything from Floyd’s house while they were employed to work on it. It appears Floyd realizes his mistake now.

But there’s now a huge problem for the ex-champ — sources familiar with the situation say the attack amounts to attempted murder, mayhem and kidnapping. Sources have also revealed that the men have obtained a lawyer to proceed with pressing charges.

I bet Biebs was involved.