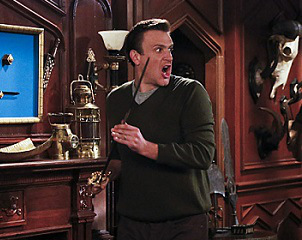 On Monday’s How I Met Your Mother, the Mosby Boys got to the bottom of where Lily disappeared to after her big fight with Marshall — and the big secret she’s been keeping.

When Marshall first finds out that Lily got into The Captain’s car, his mind immediately goes to the worst possible scenario: Something adulterous is going on between the two of them. But when Marshall, Ted, Barney & Co. arrive at The Captain’s home, they discover that he never actually saw Lily — and he’s now engaged to Robin’s former co-worker Becky (played by Laura Bell Bundy). (So now that’s two of The Captain’s girlfriends/wives that Ted has had sex with.) Lily simply used the car, made a stop at a store and then asked Becky if she could use the powder room.

Crack amateur detective Ted thinks he’s got the mystery all figured out. What does Lily do when Marshall’s been away for a while? She starts smoking again! She’s been antsy all weekend and she was chewing gum, he reasons. He gets the daisy plant from the bathroom and starts looking for the buried cigarette, but instead, he discovers a pregnancy test. And it’s positive! All this time, Linus has been bringing Lily non-alcoholic drinks.

“I told you guys I could keep a secret,” Lily declares through tears back at the hotel.

Marshall is so happy, he’s all for moving to Italy. “You’re going to get your dream because you’re giving me mine. Again,” he tells her.

So the “Daisy” in the episode’s title turns out not to be The Mother’s name, as some have speculated, but that of Marshall and Lily’s daughter.

Elsewhere, Robin freaks out because all her mother’s stories about her dad sound a lot like Barney. She’s worried that she’s marrying her father. Her mother tries to reassure her that when you have someone you can depend on, it’ll all be OK. So does Robin have that person? The bride-to-be hesitates a little  — uh oh— before answering, “I do.”