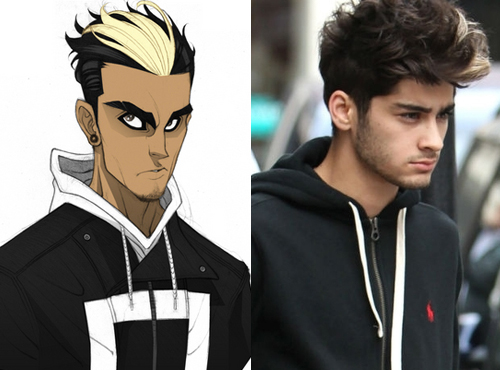 The boys went to the Marvel Comics office last year and they showed Zayn a character based on him. Mark Paniccia is a Marvel editor who came up with the idea of a new Ghost Rider and this e-mail was sent to him by illustrator and creator Felipe Smith.

“The guy from that boyband One Direction’s name is Zayn Malik. If you look him up on google you can find a bunch of images of him. I was picturing Robbie as a beefier version of him. Physically strong, with a quiet, troubled expression, […] kind of boyish. Just my initial idea. Opinions and suggestions greatly welcome, as always. I’ll send you the arc breakdowns in my next e-mail.”

It’s hard to improve on a classic. But comic creators Felipe Smith and Tradd Moore aimed to do just that when they went about redesigning the Spirit of Vengeance for the upcoming All-New Ghost Rider comic series from Marvel. Where previous versions portrayed Ghost Rider as the rider of a flame-wheeled bike (or before that, a horse), the titular star of All-New Ghost Rider debuting in March, Robbie Reyes, calls a muscle car his chief ride. And with that comes a revised look for old flame-head, turning the long-time biker into a gearhead…. literally.
“Editor Mark Paniccia approached me with the idea of creating an All-New Ghost Rider. It was suggested that this new character be younger than Johnny Blaze and Danny Ketch and that, instead of the traditional motorcycle, he drive a car,” says series writer Felipe Smith, who also draws comics. “Some might have been shocked (or even outraged) by the latter suggestion, but, as much as I am a fan of the original Ghost Rider, I was 100% in agreement with it.”
All-New Ghost Rider isn’t replacing the other Ghost Riders already burning up the streets of the Marvel U, but rather adding a new one to the fold. Smith says that’s important, and that decision allowed he and Moore to innovate on this new Ghost Rider..
“Johnny Blaze, the original flaming skull anti-hero, is still lighting up the freeway, very much active with the Thunderbolts, so there was absolutely no reason to imitate or replace him,” Smith explains. “Our All-New Ghost Rider needed his own signature look and his own signature ride.”
Series artist Tradd Moore was brought in after the initial idea for All-New Ghost Rider was formed, and said that the character’s history informed what he and Smith did to design the character itself.
“Robbie Reyes is a young Latin American from East Los Angeles with a passion for electronic music and all things motor vehicle related, so I knew that we were going to be developing a completely different Ghost Rider here, both in story and design,” says Moore. “This new direction and the prospect of working with Felipe were my primary interests with the comic.” 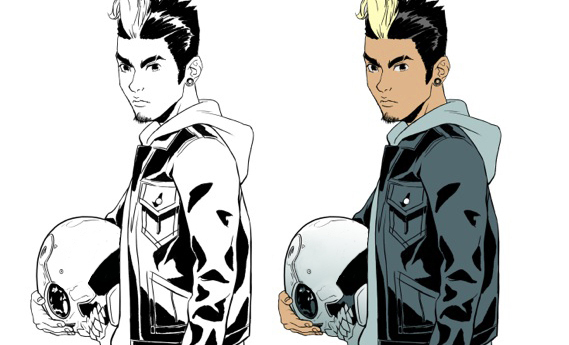 Smith says after establishing this new Ghost Rider, Robbie Reyes, age and mode of transportation, he went about elaborating on his human form, appearance as a Ghost Rider, and the transformation between the two.
“I was pretty sure about what I wanted Robbie to look like in human form, and had some clear ideas about his transformation and Ghost Rider appearance, which would be closely linked to his car and the helmet he raced in,” says the cartoonist. “So I went ahead and sketched out preliminary designs for these.”
Smith says that Marvel approved the visual design of Robbie Reyes’ human look in short order, and that after that he and Moore started independently sketching ideas for the Ghost Rider form. As you can see here, the head of this new Ghost Rider carries over the automotive aspect of the hero past just his vehicle but into there being a hotrod-style blower on his forehead and vents on the rear of his skull. Although it’s a completely new feature for any Ghost Rider, Smith says it’s all came about naturally.
“Robbie is an automotive fanatic, a gear head at heart and mechanic by profession. Putting a blower on his forehead and exhaust vents on the back of his head just made sense,” Smith explains. “These elements were based off the vents on a racing helmet both Tradd and I were referencing. We both chose the same style of helmet without prior discussion and had the same type of cars in mind for Robbie as well; a great sign that we were definitely on the same page!”

According to Moore, the design for the titular star of All-New Ghost Rider was intended to evoke a “sleek, techno vibe” while also being “grim and intimidating. That line of thinking brought about interesting rhetorical questions which spurred Moore in deciding what to draw.
“In my head I was thinking like, ‘What if Death joined Daft Punk? What if Satan became a Power Ranger? What if Speed Racer went to hell and came back a slasher villain? What would that look like?’” Moore reveals. “So yeah, Felipe and I went back and forth with sketches spitting out whatever was in our heads in attempt to unify a few major concepts for this new Ghost Rider, the primary ingredients being: Robbie, his sleek new vehicle, and a classic, recognizable Ghost Rider.

According to Smith, the biggest factors that influenced the final design of the head of Ghost Rider is the circumstances of Robbie’s transformation into the character, and the “king of spirit possessing him.”
“Both vary significantly from those of other Ghost Riders, which is most clearly evidenced by his lack of a normal flaming human skull,” Smith reveals. “There's a reason why Robbie drives a car instead of a motorcycle, and a definite explanation for his transformed physical appearance. While in Ghost Rider form, Robbie is like a well-oiled high performance machine, much like the 69' Dodge Charger he races in. From the white chrome front of his seemingly mechanical skull and blower, to the shiny black finish of the back of his head, All-New Ghost Rider's face mimics the powerful design of an American muscle car.”

Although the face of this new Ghost Rider is quite different from those who came before, a quick look at what he’s wearing below the neck shows a firm acknowledgement of the legacy of the character. Since Reyes is both a car mechanic and drag racer, Smith thought a jumpsuit was appropriate for his hero form. The addition of the “horseshoe shape” reminiscent of the Mike Ploog design from 1972 was something Moore added to the character as a nod to the past.

The ride this All-New Ghost Rider will be riding bucks the trend of motorcycles in favorite of automobiles, but it’s far from an new ride: it’s a 1969 Dodge Charger. Moore says that although the decision had been made for this Ghost Rider to drive a car, the specific make and model weren’t set and the decision became something he, Smith and Paniccia batted around for a while. 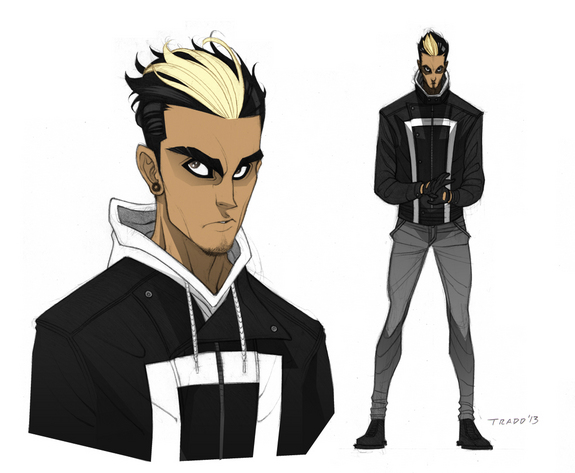 “Early on I mentioned that, while I was certainly open to ideas, I personally found 60's and early 70's muscle cars to be the coolest and most visually appealing sports cars, particularly Chargers, Challengers, and Camaros from those years,” Moore explains. “Felipe happened to be thinking the exact same thing! One of his favorite cars is a '69 Charger, so we just went along from there.”

All of these individual elements add up to form a new cohesive design for a new Ghost Rider in the pantheon of Marvel’s supernatural hero, and helps build a new character in readers’ minds even before they read the actual comic. Moore says that he and Smith were careful in determining the final design and threw out anything “superfluous” to the story and the character.

“Every part of a design should have purpose and say something about a character. All of the elements included in this design are born out of the precise moment when Robbie becomes Ghost Rider.,” Moore says. “Robbie's design, from the shock of blonde in his hair, to his circular earrings, his personality, his demeanor, his fascination with cars, his clothing choices, the jacket he's wearing, the racing helmet, the '69 Charger (the blower, the tail lights, the bumper), and the situation he finds himself in, they can all be seen reflected and unified in the Ghost Rider he becomes.” 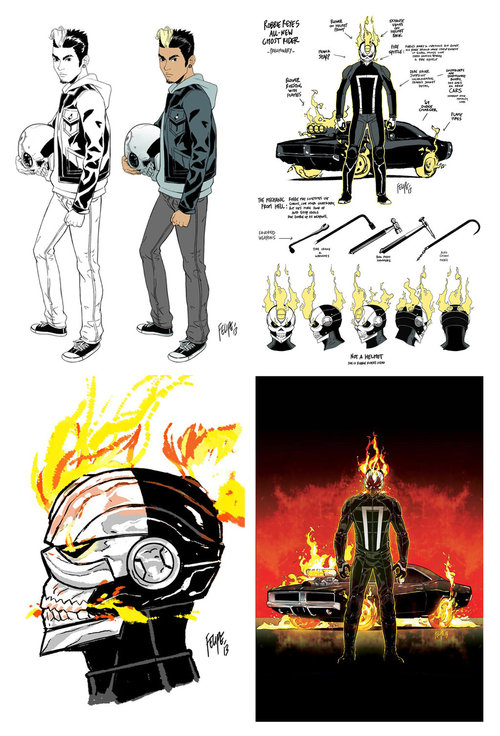