Oscar winner picked the perfect time to launch a line of T-shirts featuring the three-word phrase made famous by the film 'Dazed and Confused.' 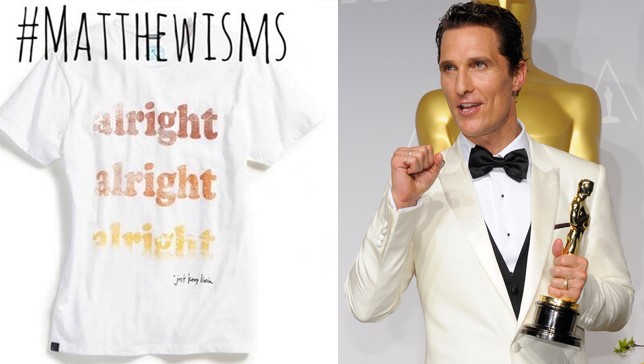 Back in 1993, actor Matthew McConaughey appeared in the hilarious coming-of-age film "Dazed and Confused," introduced to audiences with the now-famous phrase of "Alright, Alright, Alright..."

Last Sunday night, the 44-year-old ended his acceptance speech for Best Actor with the same phrase — and today? He's launching a line of T-shirts for his Just Keep Livin' charity clothing line.

McConaughey named the outdoor-inspired clothing line after the Just Keep Livin' Foundation he launched in 2008, which implements after-school fitness and wellness programs in inner city high schools. Ten cents of every dollar from the JKL brand benefits the foundation.

"This is my first adventure into the fashion world … I'm enjoying it so far," he told WWD last year. "I like working on the details, the design, the marketing. And I think the JKL philosophy is what makes it unique."

So far, the new tees are only available from Dillard's clothing in-store or via phone.