bring me no ring, groom me no groom. ( 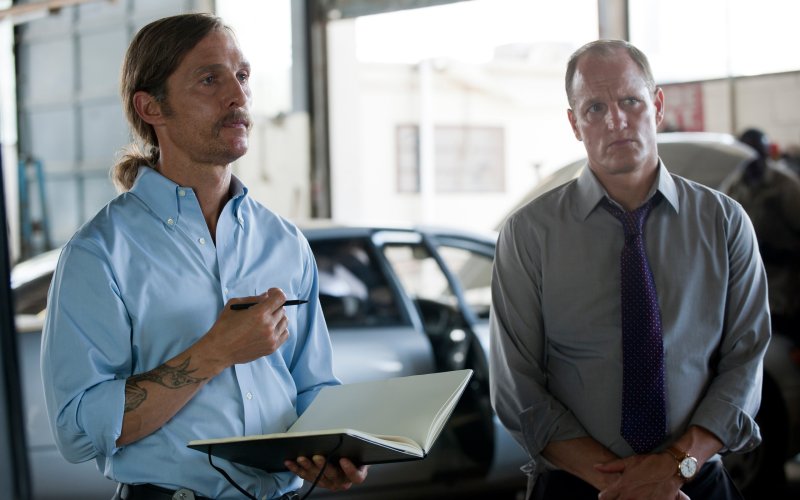 At this point, the Internet is thick with theories purporting to explain what True Detective, HBO’s deep, dark crime drama, is “about.” Misogyny. Louisiana. Oil refineries. Even Vietnam.

This is healthy. Good literature isn’t “about” any one thing, and more than any show in recent memory, True Detective seems to aspire to be good literature (as well as good television). Most TV writers want to invent great characters and tell a great story. True Detective creator Nic Pizzolatto also wants to layer his show with meaning—or meanings. So he packs it full of the weird fiction of Thomas Ligotti, the cosmic horror of Robert Chambers, the nihilism of Friedrich Nietzsche, inter-dimensional string theory, and perhaps even Unsolved Mysteries. And we keep unpacking. The more Pizzolatto puts in there, from misogyny to Vietnam, the more there is for us to find.

As for me, I’m already on the record saying what I think True Detective is primarily about: storytelling. This is how I put it in my review of Episode 5: “The more I think about it, the more I think this might be the ultimate “meaning” of the series: that at some indivisible level, life is story.”

It’s worth remembering that Pizzolatto—or, rather, Pizzolatto’s characters—describe both investigation and religion as forms of storytelling in the show’s earliest episodes.

Here’s Martin Hart (Woody Harrelson) in Episode 2, delineating his duties as a detective. “You know the job,” he tells his interrogators. “You’re looking for narrative. Interrogate witnesses. Parcel evidence. Establish a timeline. Build a story, day after day.”

And here’s Rustin Cohle (Matthew McConaughey) in Episode 3, dissing Christianity at an Evangelical tent revival meeting. “You got to get together and tell yourself stories that violate every law of the universe just to get through the goddamn day?” he asks Hart. “What’s that say about your reality?” Cohle goes on to characterize religion as “a yen for fairy tales”—a scam perpetrated on people who are full of “fear and self-loathing” by “an authoritarian vessel” who “absorbs their dread with his narrative.”

Earlier this year, I interviewed Pizzolatto for a couple of hours. The Daily Beast published a long transcript of our conversation. But a lot of material had to be cut for space, and as I was thinking about the role of religion on the show, I recalled an unpublished exchange in which Pizzolatto revealed how Christianity had affected him as a child.

It started when I asked whether his seemingly Satanic serial killer was “a vehicle for a discussion of religion.”

“Yeah,” Pizzolatto said. “That’s a big part of the South.”

"But it doesn’t seem purely geographic,” I replied. “Cohle’s critique at the tent revival meeting sounded like it might be personal for you.”

Pizzolatto’s first reaction was to distance himself from Cohle’s remarks. “The fascination with it, and the wish to bluntly discuss it are mine,” he said. “But Cohle’s views … I wouldn’t go down on the record as saying either of those men reflects my suspicions about the nature of reality.”

I asked Pizzolatto if he was religious.

“I’m not religious,” he said, “but I was raised in a heavily religious household. The kind that believed the Apocalypse was going to happen before 1990, and that believed in visions of the Virgin Mary and Medjugorje. My parents believed the Virgin Mary was appearing to children in Yugoslavia and warning us of the secret end times. I grew up Catholic. I was an altar boy. There were years of my life when I had to go to Mass every day because my parents were really on this end of the world kick. It’s strange how these things seem to work along economic lines. None of the rich people I know have ever had any experience like this.”

“What kind of experience?” I asked.

“My parents bought a big trailer of survivalist gear that they kept in the yard for years,” Pizzolatto said. He paused for a second. “Shit, now that I’m mentioning this to you, I guess it explains a lot, doesn’t it?” It was as if he was connecting True Detective to his childhood for the first time.

“I mean, I was just steeped in it,” Pizzolatto continued. “Even as a child I remember seeing my parents’ prayer group having a meeting. They would all join hands and close their eyes, and they were all saying things they were seeing, like, ‘I’m having a vision of St. Michael and his flaming sword.’ As a child it scared the hell out of me that these adults who controlled my world didn’t seem to know the difference between imagining something and having a vision. They didn’t see the difference between thinking something and hearing a voice.”

"And you could see that, even as a child?” I asked.

“Yeah,” Pizzolatto said. “To a child, this is very disconcerting. And I think that tension has always existed in me.”

Pizzolatto’s parents, in other words, weren’t all that different from the folks at the tent revival meeting; they also had a “yen for fairy tales.” Meanwhile, the tension Pizzolatto was referring to—the tension that has “always existed in him”—is the same tension that fuels True Detective: the tension between rationality and religion.

It crops up constantly on the show. It’s no accident, for instance, that the religious task force led by the Rev. Billy Lee Tuttle swoops in during Episode 2 and tries to stymie Cohle and Hart’s investigation. It’s no accident that when the case subsides, Hart joins Promise Keepers. It’s no accident that before she died, Dora Lange told her friends that she had been “going to church.” And finally it’s no accident, as we learned in Episode 7, that Tuttle’s Christian charter schools were feeders—and Tuttle’s ministry a cover story—for the pagan Yellow King-Carcosa cult that seems to be some sort of sadistic Tuttle family tradition.

Pizzolatto isn’t saying that Christianity and whatever the heck the Tuttles are doing “down south… in the woods” are the same thing. Obviously we’re talking about two very, very different moral codes here, and I’m sure Pizzolatto would acknowledge that in the course of human history, faith has often been a force for good.

But he is saying, I think, that they’re both supernatural belief systems—and that supernatural belief systems all come from the same place. Pizzolatto didn’t just make the Tuttles a clan of psychopathic murderers. He made them a clan of psychopathic murderers who subscribe to a very specific theology: a theology that may stem from Voodoo and ancient Druidic Mardi Gras practices but that also alludes, crucially, to The King in Yellow—an external narrative that is supposed to create insanity, or as Pizzolatto “prefer[s]” to put it, “deranged enlightenment,” which sounds a lot like a skeptic’s view of religion as a whole. In other words, both Christianity and “Carcosa” are stories. Stories people tell themselves to escape reality. Stories that “violate every law of the universe.”

Some people will interpret this as a critique of Christianity. But it’s not. Not really. Instead, I see it as a warning about the power of storytelling itself. Take your “fairy tales” too far, Pizzolatto seems to be arguing, and you can wind up in some pretty sick places.

There is an antidote, however—or so True Detective implies. When we spoke, Pizzolatto told me how he decided to arrange Dora Lange’s body at the beginning of Episode 1. “It was this idea of prayer, and one of the necessities of the prayer pose being the blindfold,” he explained. “In order to effectively pray you’re going to have to ignore some very basic facts about the world. In order to mean it.”

About an hour later, I asked whether Pizzolatto’s characters were antiheroes. His response made me think about that blindfold. And about how Pizzolatto’s parents had joined hands and “close[d] their eyes” when experiencing their visions. And about some stray lines scrawled in Dora Lange’s notebook:

“I closed my eyes and saw the king in yellow moving through the forest. The king’s children were marked. They became his angels.”

“I actually think they’re both heroes,” Pizzolatto replied, referring to Hart and Cohle. “It’s just that they’re very flawed men, too.” At that point, I’d only seen four episodes of the show. But to say what he wanted say, Pizzolatto decided that he had had to skip ahead to Episode 7, when Cohle takes Hart to his storage locker and convinces him that they have to rekindle the investigation. After a long intermission, they have once again become true detectives—storytellers in search of the truth.

"Cohle has a line late in the series where he says, ‘I won’t avert my eyes,’” Pizzolatto told me. “And that to me is heroic.”

This article has the bait-iest headline I've seen in a while, but the interview with Pizzolato is really interesting!