justin bieber's dad gets #exposed by a former friend 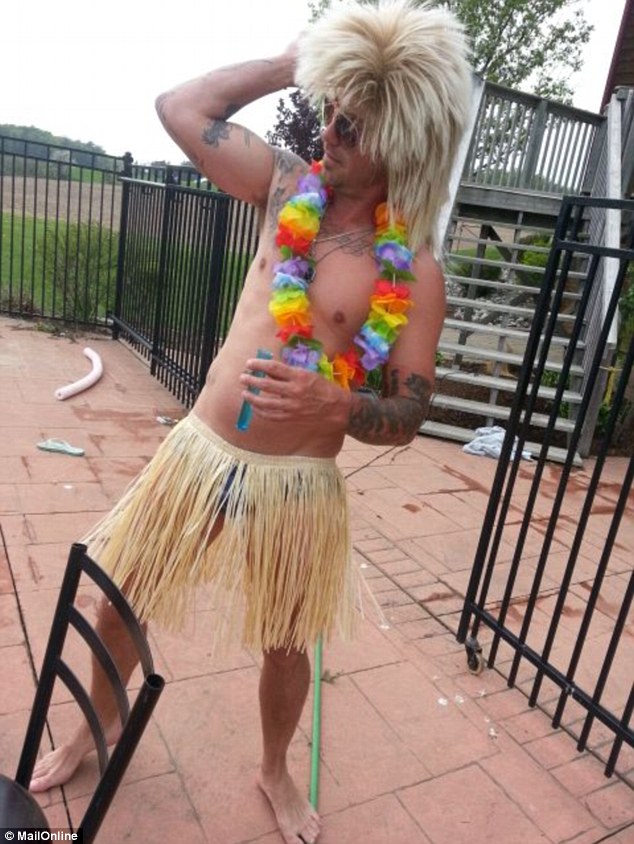 Pictured: Jeremy Bieber parties with test-tube shaped shot glass at the $850,000 mansion Justin bought for him. MailOnline has been told bad boy Jeremy boasts Justin gives him a $50,000 allowance.
The 39-year-old father-of-three invites friends round to the house for the boozy bashes – which are sometimes attended by Justin as well.
Justin and Jeremy are notoriously secretive and security conscious, so it is very rare to see pictures taken inside their parties.
They often confiscate their guests’ cameras and phones as soon as they walk through the door of the house.
But Jeremy’s former best friend Cory Bernier – who Justin referred to as his uncle throughout his childhood - has spoken to MailOnline to give an exclusive insight into his life – which is almost entirely funded by his pop star son.
Cory and Jeremy were inseparable for almost 30 years, but recently fell out after Cory finally realized the ‘manipulative’ 39-year-old had been using him throughout their friendship.
And he fears Jeremy is doing the same to Justin, after being absent for long periods of his son’s childhood before re-emerging as the young star shot to fame. 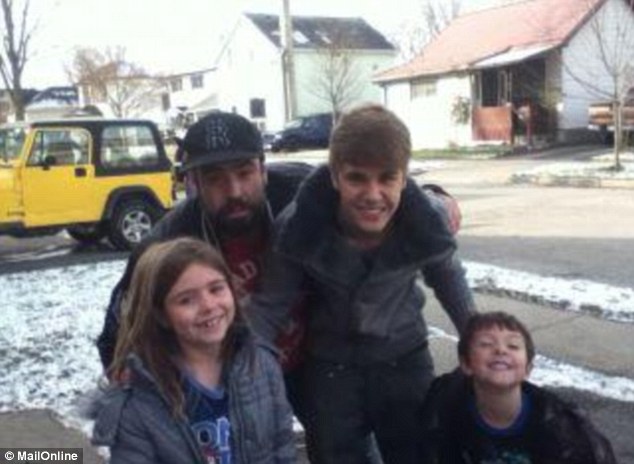 Cory, 37, said: ‘I loved Jeremy like a brother for years. In a funny way I still love him, but I just can’t be around him anymore.
‘He used me throughout our entire friendship. If I wasn’t doing something for him, then I didn’t matter to him. That’s what he’s like with everyone, it’s all about what you can do for Jeremy, that’s his only concern.
‘If he thought I had let him down in any way he would start putting me down and criticizing me. He would make he feel like a piece of dirt on the bottom of his shoe.
‘I really care about Justin, I’ve known him his entire life and I am very worried that Jeremy is using him. He is an incredibly manipulative and persuasive guy, he is very good at getting people to do what he wants.
‘Justin basically funds his entire existence. He bought that house for $850,000 and although he stays there when he’s back in Stratford, it is basically Jeremy’s place.
‘I know Justin also pays his dad a huge monthly allowance. It used to be $10,000, but more recently Jeremy was boasting that it was $50,000. I’m not sure whether it really is that much, but that's what he told me.
‘The cash is supposed to be for the up keep of the house, but there’s no way it costs that much. And when Jeremy goes away with Justin, he doesn’t pay for anything. Either they just get stuff for free, or Justin pays.
‘Jeremy has always been a party animal, that’s just his thing. But before Justin hit the big time he couldn’t afford to live that kind of lifestyle. Now he’s living the dream at his son’s expense.
‘But rather than pay Justin back with fatherly advice, he actually leads him astray. It is no coincidence that Jeremy has been in the background the majority of times Justin has got in trouble recently.
‘The last thing I want is for Justin to stop seeing his dad, but he needs to know what Jeremy is like and be careful. The way things are going he could ruin his whole career and everything he has worked so hard to achieve.’
Cory added: ‘Jeremy has always had an arrogant streak, but he is much worse now. He goes around telling people, ‘I’m Justin Bieber’s dad’, as though that makes him really special.
‘If he walks into a room and there’s someone in there he doesn’t know he’ll do stuff to intimidate them, like tell them to move out of a chair so he can sit down. He can be a real bully.’
Justin celebrated his 20th birthday over the weekend and unsurprisingly Jeremy traveled down to Atlanta from his home in Stratford, Ontario to help Justin mark the occasion in style.
Their mother Erin Wagner was not present. Last week MailOnline exclusively revealed Jeremy had split from her, apparently because the relationship got in the way of his partying lifestyle.
It is unclear whether Jeremy has ever held down a full-time job, although it has been reported in the past that he made money by selling autographed photos of the pop star on the Internet.
He is linked to Mixed Martial Arts clothing brand Headrush, but it is not known if he makes money from the business.
In January, Justin was arrested in Miami Beach, Florida, on suspicion of driving under the influence, driving with an expired license and resisting arrest without violence. Jeremy had accompanied his son on the controversial break.
Tattooed Jeremy – who has been jailed at least twice in the past – was heavily criticised in the wake of the incident.  It was even suggested he was in an SUV blocking the street to allow the drag race.
The day after Justin was released from custody on a $2,500 bond, the father and son pair were pictured out partying.
And then on January 31, Jeremy was present again when his son was accused of smoking marijuana on a private flight and verbally abusing a flight attendant.
It seems everything got too much for 27-year-old Erin during that turbulent period and four days after the DUI arrest she wrote: ‘Hard to believe sometimes that things can get better! Trying to keep going!’
She followed that up with: ‘Ready for the next chapter.....wonder what it's about....#unknown’. 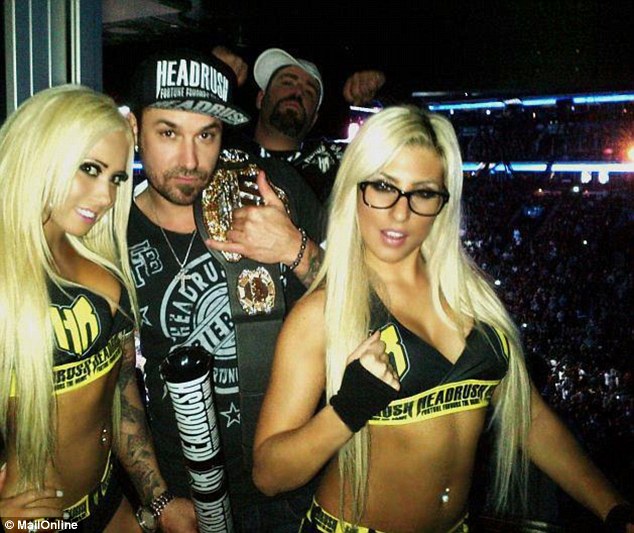 This is not the first time Jeremy’s wild behavior has affected his family life for the worse. He split from Justin’s mother, Pattie Mallette, just 10 months after she had given birth to the future global superstar following a troubled on off relationship
.
According to Pattie’s autobiography, The Only Way Is Up, the teenagers were actually engaged, but called off the wedding when Jeremy cheated on her with a mutual acquaintance.
She also claims Jeremy was in the county jail for fighting the day Justin was born and that he often let his son down, regularly failing to turn up when he was due to take him out for the day.
Erin still visits Jeremy’s luxury pad, but she now has her own place and works for technology company Fibernetics in nearby Kitchener. Her family all live in Cypress Texas, having relocated there from Burlington, Ontario.
She has been a regular fixture in Justin’s life, often going with the family to glitzy awards ceremonies, and many saw her as a positive influence.
His father on the other hand is generally seen as a bad role model. There is no official recording of his time in jail at the time of Justin’s birth – although records are expunged after a certain period of time in Canada.
But he has got other offenses on his rap sheet. In 1997 he was convicted of assault and sentenced to 90 days in prison.
Two years later he spent another 21 days in jail after violating his probation. He was also convicted of a second probation violation at the same time.
Then in January 2004 he was charged with assault again, but the case was dismissed.
Big shot: Cory said: 'Jeremy has always been a party animal, that’s just his thing. But before Justin hit the big time he couldn’t afford to live that kind of lifestyle. Now he’s living the dream at his son’s expense'
Despite his criminal past Justin still seems to look up to his wayward father. Even though they were out of contact for extended periods during his childhood, Justin gave an interview saying: ‘I have a great relationship with my dad.
‘When I was younger, he taught me how to play some songs on the guitar, like ‘Knockin’ on Heaven’s Door’ by Bob Dylan. He taught me how to drive too.’
Days after his Miami arrest he tweeted: ‘I have the greatest Dad in the world. He’s taught me how to love, learn, and stay true to myself. I will forever be grateful because he was my superhero #batman.’
source: http://www.dailymail.co.uk/news/article-2572540/EXCLUSIVE-Jeremy-Bieber-dancing-grass-skirt-shot-glass-hand-mansion-star-son-bought-gives-50-000-allowance-live-in.html#ixzz2v8PuPxgV