Jorn Tromolto Speaks Out About Calling Idina Menzel "Adele Dazeem" at the Oscars! 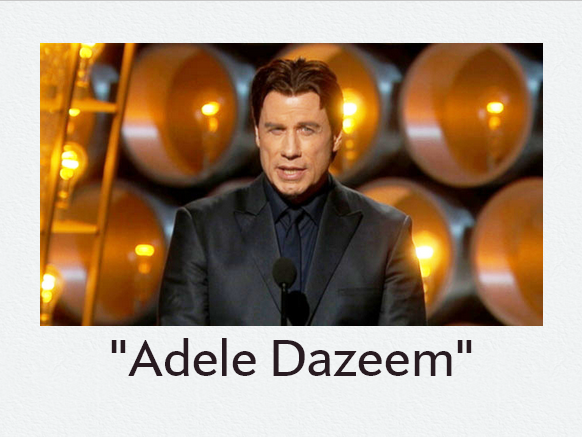 Idina Menzel didn't seem too concerned when John Travolta completely butchered her name when introducing her performance of "Let It Go" at the Oscars Sunday.

But that doesn't make anybody else who witnessed the slip-up (and then rewitnessed it thousands of times online) any less flabbergasted by Travolta seemingly calling the Tony Award-winning star "Adele Dazeem"—which, we can't impress enough, doesn't really sound at all like "Idina Menzel."

And it turns out, Travolta didn't let himself off the hook right away, either.

"I've been beating myself up all day," the Be Cool star said in a statement to E! News. "Then I thought...What would Idina Menzel say? She'd say, 'Let it go, let it go!' Idina is incredibly talented and I am so happy Frozen took home two Oscars Sunday night!"

This comes, of course, after Twitter exploded with reactionary posts and a Travoltafication name generator popped up (John Travolta, for instance, would be Jort Tzddimorltzi), becoming an instant viral hit.

And in case you somehow missed it live or otherwise...

A source told E! News Monday that Travolta had no problem with Menzel's name during rehearsals on Saturday, leaving those who witnessed his flawless run-through even more perplexed the following day.

But we were also told that the Wicked star "laughed it off" afterwards, thinking it was "so funny."

Which it was...but still pretty strange.

At least in addition to Travolta's flub, her gorgeous, powerful rendition of the now Oscar-winning song is right there living on in Internet posterity along with it.