Zack Snyder is not here for Terry Gilliam's Watchmen. 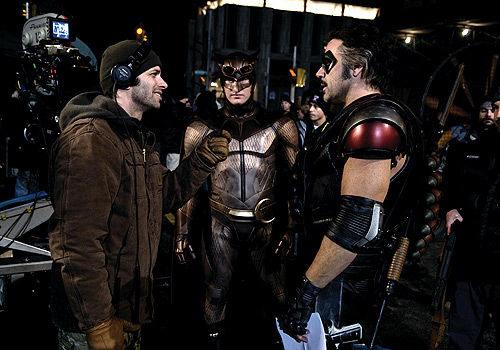 A frustrated Terry Gilliam, once attached to direct an adaptation of Watchmen, famously called the influential miniseries by Alan Moore and Dave Gibbons “un-filmable.” For a long time it seemed he was right, at least until 2009, when Warner Bros. released Zack Snyder’s polarizing take on the comic.

Five years later, Snyder’s Watchmen is still capable of sparking debate — at least among some of the people involved with both adaptations.

Producer Joel Silver, who developed the earlier attempt with Gilliam, last week criticized Snyder as being “too much of a slave to the material,” explaining to ComingSoon that Gilliam conceived what would’ve been “a MUCH much better movie” — by significantly changing the third act.

“What he did was he told the story as-is, but instead of the whole notion of the intergalactic thing which was too hard and too silly, what he did was he maintained that the existence of Doctor Manhattan had changed the whole balance of the world economy, the world political structure,” Silver told the website. “He felt that THAT character really altered the way reality had been. He had the Ozymandias character convince, essentially, the Doctor Manhattan character to go back and stop himself from being created, so there never would be a Doctor Manhattan character. He was the only character with real supernatural powers, he went back and prevented himself from being turned into Doctor Manhattan, and in the vortex that was created after that occurred these characters from Watchmen only became characters in a comic book. [...] So the three characters, I think it was Rorschach and Nite Owl and Silk Spectre, they’re all of the sudden in Times Square and there’s a kid reading a comic book. They become like the people in Times Square dressing up like characters as opposed to really BEING those characters. There’s a kid reading the comic book and he’s like, ‘Hey, you’re just like in my comic book’ It was very smart, it was very articulate, and it really gave a very satisfying resolution to the story, but it just didn’t happen. Lost to time.”

That’s arguably more “filmable” than an alien squid, but satisfying? Zack Snyder, who used Doctor Manhattan as the threat that unites the world, begs to differ.

“It’s funny, because the biggest knock against the movie is that we finally changed the ending, right?” Snyder told The Huffington Post, characterizing Gilliam’s ending as “completely insane.”

“The fans would have been thinking that they were smoking crack,” added his wife and producing partner Deborah Snyder.

“Yeah, the fans would have stormed the castle on that one,” Snyder continued. “So, honestly, I made Watchmen for myself. It’s probably my favorite movie that I’ve made. And I love the graphic novel and I really love everything about the movie. I love the style. I just love the movie and it was a labor of love. And I made it because I knew that the studio would have made the movie anyway and they would have made it crazy. So, finally I made it to save it from the Terry Gilliams of this world.”

In fairness, Silver did say he liked Snyder’s Watchmen, and the director thinks more fans might if it were released today.

“… I believe that we’ve evolved — I believe that the audiences have evolved,” he said. “I feel like Watchmen came out at sort of the height of the snarky Internet fanboy — like, when he had his biggest strength. And I think if that movie came out now — and this is just my opinion — because now that we’ve had Avengers and comic book culture is well established, I think people would realize that the movie is a satire. You know, the whole movie is a satire. It’s a genre-busting movie. The graphic novel was written to analyze the graphic novel — and comic books and the Cold War and politics and the place that comic books play in the mythology of pop culture. I guess that’s what I’m getting at with the end of Watchmen — in the end, the most important thing with the end was that it tells the story of the graphic novel. The morality tale of the graphic novel is still told exactly as it was told in the graphic novel — I used slightly different devices. The Gilliam version, if you look at it, it has nothing to do with the idea that is the end of the graphic novel. And that’s the thing that I would go, ‘Well, then don’t do it.’ It doesn’t make any sense.”

He's not wrong but Zack should just not talk.