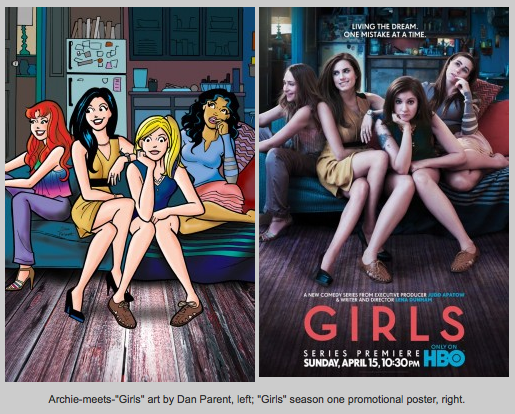 Lena Dunham, the Golden Globe-winning star and creator of HBO's "Girls," will make her comic book writing debut in 2015 with a four-issue story from Archie Comics, set to take place within the flagship "Archie" series.

"She's the voice of her generation," Archie co-CEO Jon Goldwater told CBR News. "To have someone like that say, 'Not only am I a fan, I'd love to write something,' it just epitomizes all the hard work we've put in for the last five years."

Tapping Dunham to write an "Archie" story is the latest in a series of unconventional moves from the publisher, which have included the "Life with Archie" magazine telling the story of adult, married versions of the Archie characters; the introduction of openly gay character Kevin Keller; and "Afterlife with Archie," an ongoing non-all-ages zombie story by writer and new Archie chief creative officer Roberto Aguirre-Sacasa and artist Francesco Francavilla.

Aguirre-Sacasa, himself a screenwriter, knew Dunham and assisted in bringing her to Archie Comics. Dunham publicly expressed her affection for Archie Comics last November during a Q&A event with J.J. Abrams and Doug Dorst in New York City, and the publisher reached out to her about the potential of working together. Aguirre-Sacasa said Dunham jumped at the chance.

"We sent her a box of tons of Archie books, she devoured them all, and maybe a week or two later came back with her pitch," Aguirre-Sacasa said to CBR. "I'm not going to spoil it, but it's really, really funny. It's incredibly contemporary. It's a classic Archie story, with a definitely unique, Lena spin, and it's going to be set in Archie continuity."

Reading Archie comics in bed like the grownup woman I am.

Dunham first received national attention for her film "Tiny Furniture," which she wrote, directed and starred in. "Girls" debuted in 2012, and quickly became one of the most acclaimed and discussed comedies on TV; with the show winning the Golden Globe in 2013 for both Best Television Series -- Musical or Comedy, and Dunham herself picking up Best Actress -- Television Series Musical or Comedy the same year at the awards. She's hosting "Saturday Night Live" this coming Saturday, March 8.

"She brings a unique point-of-view to all these characters, but she also loves them, and knows what makes them work," Aguirre-Sacasa said. "It's really good stuff, and obviously it's going to be a huge deal for Archie."

Dunham isn't the first on-screen multi-hyphenate to branch out into work-for-hire comics -- writer/director/actor Kevin Smith has written multiple titles, including high-profile stints on "Daredevil" and "Green Arrow" in the late '90s and early 2000s.