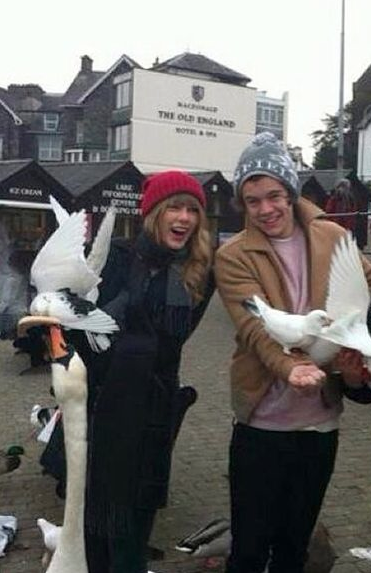 Taylor Swift and Harry Styles had a friendly reunion at The Weinstein Company's Pre-Oscar dinner party at the Montage Hotel on March 1.

Despite being seated several tables apart, the former couple had a "friendly 10-minute chat" before the dinner. "They looked totally fine considering all their history."

Another onlooker remarked that rumors of a feud appeared to be "wide of the mark," with the couple seeming "totally cool with one another."

The ex-couple previously grabbed dinner together after the 2013 VMA Awards with mutual pal Ed Sheeran.
1 2 3

Harvey Weinstein has revealed that Taylor Swift will contribute music to an all-star soundtrack album for his upcoming musical Finding Neverland.

"The songs are fantastic," said Weinstein, speaking at his pre-Oscar party on March 1. "We’re going to release an album before we open in the West End."

“Finding Neverland” tells the story of the growing bonds between writer J.M. Barrie and a woman and her young boys, which became the inspiration for “Peter Pan.” The events were the subject of a 2004 film starring Johnny Depp.

Weinstein’s first major theatre project is set to debut in winter 2015 in London, followed by a production on Broadway during the 2015-16 season. He has hired Tony Award winner Diane Paulus (“Pippin”) as the director and the British musician Gary Barlow to write new songs.

Universal Music are in talks to release the soundtrack album.

Weinstein and Swift have built a solid working relationship over the past year, with Swift contributing music to the One Chance soundtrack and landing an acting role in The Giver.