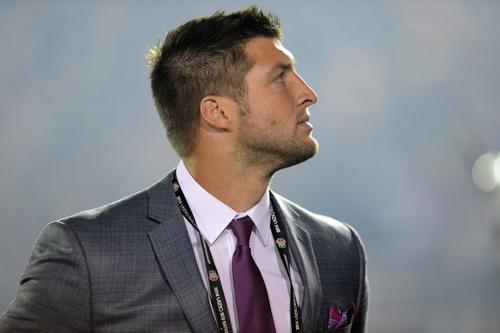 Video at the source

Urban Meyer and his former Florida QB, Tim Tebow, weren't trying to lure a recruit to the Buckeyes when the coach handed Tebow the phone last March. But it still amounted to a secondary infraction.
It was a recruit on the other end. Despite entertaining Tebow, friends and family, Meyer wasn't too busy to answer the phone.

Meyer and Tebow, his former quarterback at Florida and now an ESPN analyst, weren't talking about recruiting, and Meyer said he wasn't trying to lure linebacker Clifton Garrett to the Buckeyes when the coach handed Tebow the phone.

But the ensuing eight-second conversation was a minor violation of NCAA rules, one that Ohio State self-reported to the NCAA in 2013 among other secondary infractions, according to documents obtained by the Cleveland Plain Dealer.

The violation went public when Garrett, who ultimately committed to LSU, later tweeted about it.

I just called Coach Meyer just ta see whats up and next thing you know I was talking on the phone to TIM TEBOW!!! #InShockRightNow #Insane!

According to the newspaper report, Meyer told Garrett he was on vacation and having lunch with friends and family, which included Tebow. Garrett then asked Meyer whether he could wish Tebow luck on the upcoming NFL season, and Meyer obliged.

But Meyer, who maintained it was an unintentional violation, reported that neither he nor anyone else on the Buckeyes' staff had instructed Garrett to call and that Tebow had not talked to any other prospective recruits -- not then nor at any other time.

Ohio State reported 42 secondary infractions to the NCAA across all sports during 2013, according to the report, which cited the school documents and said that number wasn't out of the ordinary.

Among the other violations reported were "inadvertent calls on smart phones" -- also known as pocket dials -- to recruits by coaches.

"Six out of the seven calls were for one minute or less and the other was a two minute call or less," the school reported, according to The Plain Dealer. "The coaches were unaware that the calls had taken place until the recruiting software flagged the calls in April of 2013. The inadvertent calls were not made through the recruiting software application on the coaches' phones and therefore, the coaches were unaware that the calls had occurred until the Compliance Office cross referenced the coaches' phone bills with the recruiting information in the software.

"Notably, the review did not find evidence of attempts to evade the phone call legislation by receiving an immediate return call from a recruit."

Although, apparently, a school self reporting a violation is not the same thing as it actually being an NCAA violation.