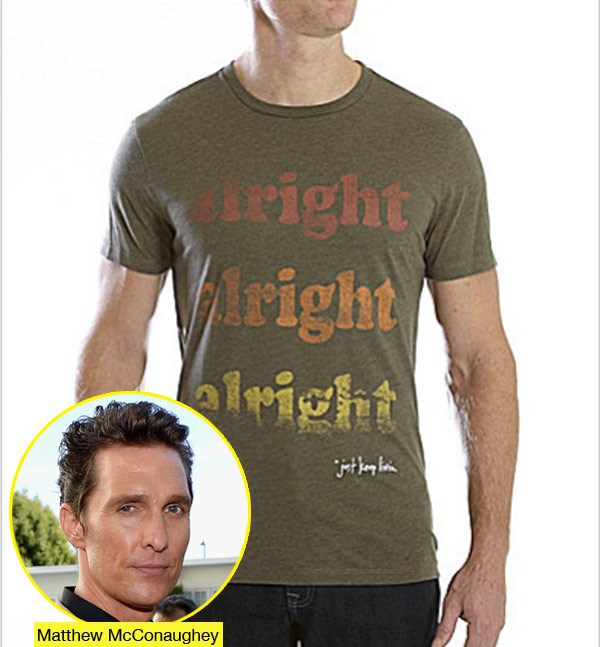 Looking for the perfect outfit for Oscar night? Why not show your support for the Oscar-nominated actor by rocking his famous Globes acceptance speech right on your chest?

“Alright Alright Alright,” we already adore Matthew McConaughey, especially after he kicked off his acceptance speech at the Golden Globes on Jan. 12 with a a very “McConaughey” catch phrase! Not only did he gracefully accept the ‘Best Actor’ award for his role in the Dallas Buyers Club with praise and eloquent ease, [LOL] but his opening quickly caught on, as actors at the show and during awards season can’t stop mimicking his catchphrase!

He started out his speech with the quirky phrase, “Alright Alright Alright.” The funny saying is one that Matthew made famous early in his career in the 1993 movie, Dazed & Confused. We love the actor’s charming personality and melted the moment he walked on stage and hit us with the memorable saying!

The actor has taken his funny saying and turned it into a phenomenon! In his clothing line, JKL apparel, (available exclusively at Dillard’s), he introduced some fun graphic tees with his “Alright Alright Alright” catch phrase front and center. The JKL just keep livin Graphic Alright Tee comes in a very cool army green color with multicolored, letters in the middle of the shirt. This graphic tee is the perfect top to pair with jeans for hanging out or going to the movies. We love graphic tees because they introduce a funky way to wear a simple t-shirt — and we think Matthew’s phrase on the shirt is totally fun and hilarious! With a $35.50 price tag you can’t go wrong with this fun look.
Source
If he wins, I hope he repeats this speech, along with getting the audience to sing along with Gaga's Venus since he seems to be into the cosmos and all that.
Tags: award show - academy awards, fashion, matthew mcconaughey
Subscribe
Previous
← Ctrl ← Alt
Next
Ctrl → Alt →
Previous
← Ctrl ← Alt
Next
Ctrl → Alt →