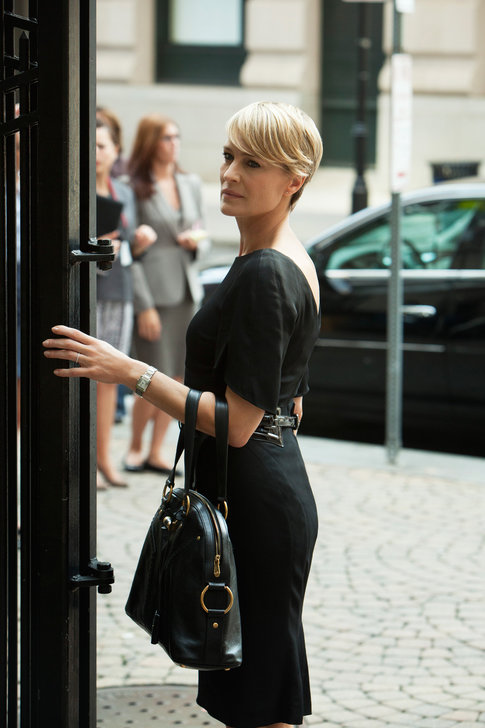 Enjoy the political and personal machinations of Claire Underwood — aka Robin Wright — while you can. Wright made her directorial debut with the 10th episode of "House of Cards" Season 2, and she says it made her realize she prefers directing to acting.

"I have the bug. I love it. I wanna keep doing it. Kinda wanna stop acting … not kidding," Wright told a group of reporters at a "House of Cards" press day earlier this month. "I'm such a control freak. That's really the truth of it, and being in this business now for almost 30 years, I've been biting my tongue for so many years on sets, 'C'mon, we've been doing it forever, we know how this scene should be.' And you can't say anything … so it's nice to be at the helm of the ship, because you're allowed, you're granted clemency, to direct.

"And you know how to direct an actor because you are an actor … a lot of directors don't know how to direct actors, because they've never done it before, and it's actually fiercely destructive to say, 'Have more energy!' or 'Can you be sadder?' … It warps your brain, because you are a puppet as an actor, in a sense, and you want to try to achieve the direction you've been given, and that is virtually impossible. You can't play a descriptive word like that. 'Be evil' … give me a scenario, give me a story, give me what would allow me to portray evil. Give me an idea, a reference of some kind."

Wright, in "The Yo Show" clip above, gets glowing reviews from series creator Beau Willimon, and Kevin Spacey and Michael Gill, who are among the co-stars she directed in the "HoC" episode that finds the Underwoods — no major spoilers ahead — caught up in a brewing White House scandal.

And despite her philosophy against using descriptive words as directorial suggestions, she does admit there's one actress that kind of direction works on: her, when it comes courtesy of "House of Cards" producer-director David Fincher.

"He's got his own style completely. He has his own style with me … He does something different with me than he does with everybody else," said Wright, who won a Golden Globe last month for the first season of "House of Cards." "And that's why he's a great director, because he picks up on the nuance of the person, that aura that you are … and he knows how to get it out of you.

"With me, he just yells out, funnily enough, those descriptive phrases, and it works, because he doesn't call, 'Cut.' He just keeps … Claire says a line and he'll just go, 'Don't cut! Say it like this! Say it like you wanna kill your mother! Say it like you are about to fart!' He'll just throw things out at me so fast that I don't have time to think."
Tags: actor / actress, film director, kevin spacey
Subscribe
Previous
← Ctrl ← Alt
Next
Ctrl → Alt →
Previous
← Ctrl ← Alt
Next
Ctrl → Alt →