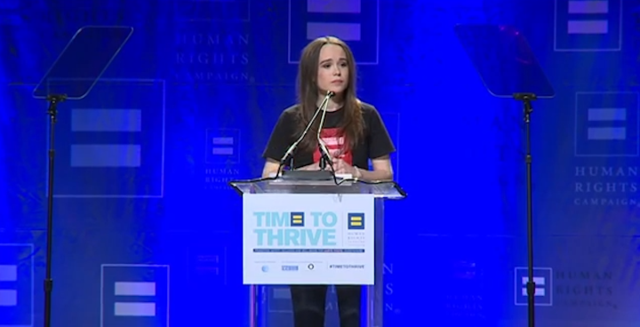 Last night during her coming out speech at an LGBTQ youth conference in Las Vegas, Ellen Page talked about the crushing weight of Hollywood beauty standards. She mentioned specifically an article about her on E!'s web site, which was "mysteriously" pulled offline afterward.

"I try not to read gossip as a rule," Page said. "But the other day a web site ran a picture of me wearing sweatpants on the way to the gym. And the writer asked 'why does this petite beauty insist on dressing like a massive man?'" As Kia Makarechi of the Huffington Post pointed out on Twitter today, that line comes verbatim from a January 8 article on Eonline.com in which the writer says he's "starting to wonder if the former Juno star is actually homeless." He also noticed that the article is no longer online.

Further, per Makarechi, E!'s article on her speech mentions those remarks in vague terms, saying that Page "shared that she faced an inner struggle because she was in the Hollywood spotlight." Unlike various pieces — like ones in The Hollywood Reporter, The Los Angeles Times, and The Guardian — E!'s article did not quote Page directly on the matter, nor did E! mention its culpability at all.

But, in linking to their story about Page's coming out on Twitter they did put a heart emoticon after a quote in which she says she wants to "help others have an easier and more hopeful time." E! is just so inspired by Ellen Page.