Hollywood Mourns the Death of Marius the Giraffe 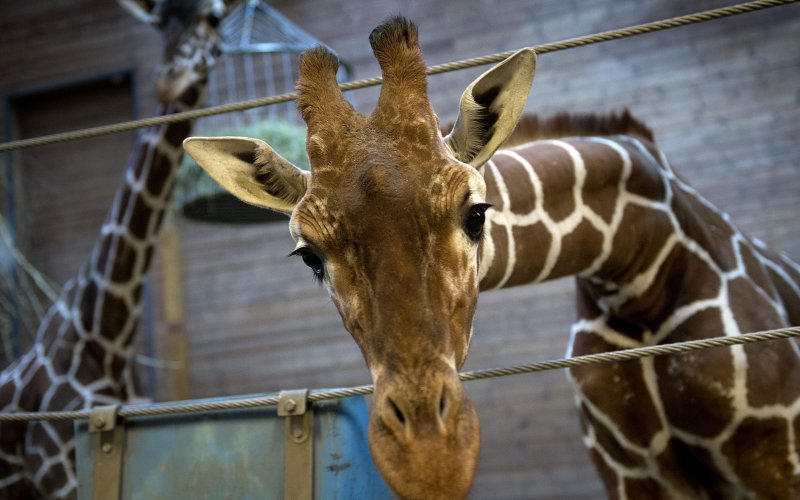 Over the span of his tragically short life, we doubt young Marius ever imagined a sobbing Kirstie Alley tweeting on his behalf.
Last Sunday Marius, a 2-year-old giraffe, was slaughtered at the Copenhagen Zoo. Marius, whose genetic composition was incompatible with the zoo's international breeding program, was shot with a bolt gun and fed to lions in front of a live audience. Adding another layer of surreality to this insane story, numerous celebrities have fired up their various social media platforms in an attempt to call attention to the killing.

While Ian Somerhalder plays a bloodthirsty vampire on TV, the real life actor and animal rights activist wouldn't hurt a fly. Somerhalder took to Twitter last Saturday urging followers to sign a petition to save Marius. While the petition ultimately failed, we're sure Ian's adolescent fans appreciated this virtual window into his swoon-worthy, giraffe-cuddling, sensitive side.

Who wants to see this little baby go to a sanctuary instead of becoming food?
Tell them! http://t.co/5kiNh1icME


Ian Somerhalder wasn't the only genetically gifted celeb to speak out on Marius' behalf. Newly crowned Sports Illustrated cover model Nina Agdal posted this picture on Instagram, condemning the killing with a searing caption: "Wtf was that about, Copenhagen Zoo?…Horrible. I’m disgusted."

Meanwhile, Ricky Gervais' tendency to joke about anything and everything has made the British comedian a lightening rod for controversy. But when it comes to animal rights, Gervais is dead serious. Ricky consistently uses his social media presence as a means to spread petitions and raise awareness for various causes, predominately of the furry variety. He posted two tweets about Marius, raging against the zoo's breeding practices and paying tribute to the young giraffe. "RIP Marius. You gorgeous little thing" is about as articulate and heartwarming as you can get in under 140 characters. If only Ricky Gervais was this likable when he hosted The Golden Globes...

Very disappointed in Copenhagen zoo. Destroying a beautiful healthy animal because it was surplus to your needs just isn't good enough.

Over the span of his tragically short life, we doubt young Marius ever imagined a sobbing Kirstie Alley tweeting on his behalf. Out of all the celebrities in the Twitterverse, Alley displayed the most personal reaction to Marius' death: "Oh man, I've seen a lot of abuses in my life, but this baby Giraffe killing at the Copenhagen Zoo is overwhelming. I have to take a cry walk." :(

Oh man,I've seen a lot of abuses in my life, but this baby Giraffe killing at the Copenhagen Zoo is overwhelming. I have to take a cry walk.

Unfortunately, Marius' death sparked a lesser tragedy: Axl Rose's Twitter reaction. The rocker turned reality TV star is clearly still looking for attention in all the wrong ways, as evidenced by this tasteless string of giraffe meat related tweets. While his reaction is clearly inappropriate, watching Axl attempt to address this serious issue is pretty funny in a twisted sort of way—here's hoping Marius had a dark sense of humor.

Just enjoying the lion's share of some tasty baby Giraffica sliders! Mmmmm! What'll them crazy Danes think of next!

But seriously, let me get this straight... The Danes killed a 2yr old baby giraffe, chopped it up n' fed him (cont) http://t.co/rYoVVMTV5t

Proving that he has a big brain under that puffy mane, Queen's Brian May has taken a strong stance on this issue, publishing a lengthy post on his blog. May is using his celebrity to call for a complete boycott of the Copenhagen Zoo, in the hopes of shutting down the institution once and for all.

As if one giraffe killing wasn't enough, another zoo in Denmark is now considering euthanizing one of its giraffes, also named Marius. Meanwhile, celebrity zookeeper Jack Hanna is committed to making Denmark a country where all giraffes named Marius can once again feel safe, at any cost. Hanna has reportedly raised $100,000 to purchase the young giraffe, and is also attempting to ratchet up international zoo pressure against the two Danish zoos. Hanna explains, "I want no involvement with anyone (from that zoo) if this kind of killing is practiced."

I still can't believe what happened in Denmark on Sunday. Here at the Columbus Zoo we don't euthanize healthy... http://t.co/uYk2wSYMcw