Justin Bieber's Jailhouse Footage: Inside the Battle to Keep It Private 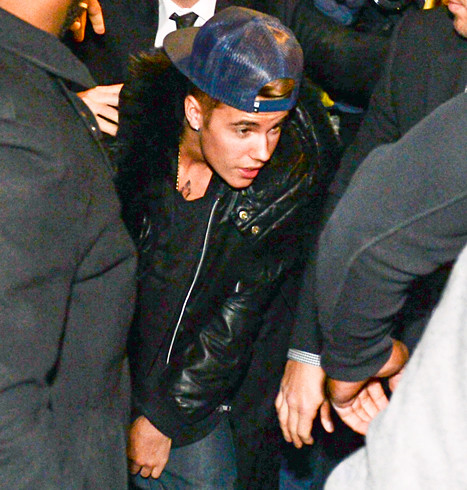 Remember the footage that was released last week that showed Justin Bieber getting frisked after his suspicion of DUI arrest in Miami? Well, there's more where that came from!
And now the singer's legal team is on the case to stop it from ever seeing the light of day — because the rest of the video contains imagery of Bieber's private parts.
In a preemptive strike Tuesday, Bieber's Florida-based attorney, Roy Black, submitted a motion to prohibit public disclosure of any more video from his client's arrest.
According to the motion, obtained by "The Insider With Yahoo," "the defendant was captured on videotape in various states of undress, which show intimate personal parts of the defendant's body."
The motion further points out that there are multiple requests from news media outlets to have the rest of the footage made public. Black says that any such release would cause his client "irreparable harm."
A source tells TMZ that the 19-year-old's private parts can be seen while Bieber is urinating in his jail cell. "Justin is seen several times stumbling around while he was taking his tests," the source reveals. "As if he had a problem with his balance ... [the video] also shows Justin taking his various tests and eventually taking a piss. … The stumbling and going to the bathroom is obviously reason enough for his attorneys to request it be sealed."
Darren Kavinoky (@DarrenKavinoky), a criminal defense legal expert in California who's not involved with Bieber's case, says that, generally speaking, it's unusual for lawyers to be filing a motion prior to arraignment or a case really getting off the ground. However, when it comes to Bieber (and his huge place in the public spotlight), nothing is necessarily unusual.
"While something that would be an official record — like a booking photo — is frequently released, if there is a video of him peeing, it would likely only be a by-product that exists for the safety of the inmates, or to show that proper procedure was taking place in the jail cell," he says. "It seems like a solid motion."
Kavinoky adds, "The judge in a case like this has to balance the public's right to know with Justin Bieber's right to privacy and his right to have a fair trial. There can't be anything that's unfairly impacting the defendant's process. We don't have the right to peek into his underwear, and we shouldn't. The public has a legitimate right to know about Bieber's legal briefs, but not his boxer briefs."