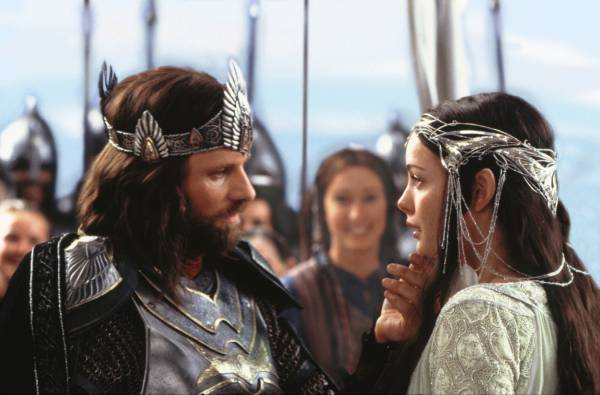 Did you know that J.R.R. Tolkien almost axed the love story between Aragorn and Arwen in the Lord of the Rings? Why cut the pathos that comes from human/elf romance? Shipping, that's why.
Back in 1955, poet W.H. Auden tried to persuade Tolkien to drop the love story between Aragorn and Arwen, describing the romance as "unnecessary and perfunctory," an unpublished letter by Tolkien has recently revealed. Why? Because Auden [wait for it] was an unabashed Éowyn/Faramir fanboy!
In this unpublished letter, Tolkien writes to his publisher about the difficulties in finishing The Return of the King,  the third and final installment of his seminal work. In the end, Aragorn is crowned king of Gondor and marries Lord Elrond’s beloved daughter Arwen and they live happily ever after.
Here's what Tolkien had to say about Auden's advice:
"'Auden on the whole approves of Vol III seen in galleys,' wrote Tolkien, revealing that the poet supported what Tolkien called 'the Éowyn-Faramir business,' where Éowyn initially falls for Aragorn, but ends up with Faramir when he does not return her love. 'Then the heart of Éowyn changed, or else at last she understood it. And suddenly her winter passed, and the sun shone on her,' runs the story.
But 'he thinks Aragorn-Arwen unnecessary & perfunctory,' mourns Tolkien in the letter to Rayner Unwin. 'I hope the fragment of the 'saga' will cure him. I still find it poignant: an allegory of naked hope. I hope you do.'"
Jane Johnson, who is a novelist (she also writes all those Lord of the Rings and Hobbit film visual companions under the pen name Jude Fisher) and a former Tolkien publisher, agreed with Tolkien, saying:
"[it is] so poignant – the love of a mortal man for an immortal elven maiden who must sacrifice her immortal heritage if she decided to follow her heart, and who will in any case – since elves are so long-lived – have to suffer seeing her beloved die, leaving her alone with many empty years of her life ahead of her".
"It's a heartbreaking choice: that Arwen chooses to stay in Middle-earth with Aragorn rather than follow the rest of her kind into the Undying Lands demonstrates how fine a man, and king, he is. It also picks up the theme of the story of Beren and Lúthien – again of a man falling in love with an elven woman – from The Silmarillion, a tale acknowledged by JRR Tolkien to refer to his own romance with his wife, Edith, and engraved on their shared grave."
Despite their difference of opinion, Auden may have been ultimately convinced that the romance between Aragorn and Arwen was right because in a New York Times review of The Lord of the Rings, which was published in 1956, he doesn't have many complaints with how it all turned out:
"the demands made on the writer's powers in an epic as long as The Lord of the Rings are enormous and increase as the tale proceeds – the battles have to get more spectacular, the situations more critical, the adventures more thrilling – but I can only say that Mr Tolkien has proved equal to them."
If you want to get your hands on this little baby, the letter is due to be auctioned off by Bonhams in London on March 19. It's expected to fetch between £6,000 and £8,000. A tidy sum.
What do you guys think? Do you believe Aragorn and Arwen’s romance is essential to the Lord of the Rings saga, or would you have rather Tolkien cut it from the books?
First the R/Hr backtracking, now this. Is nothing sacred anymore?!